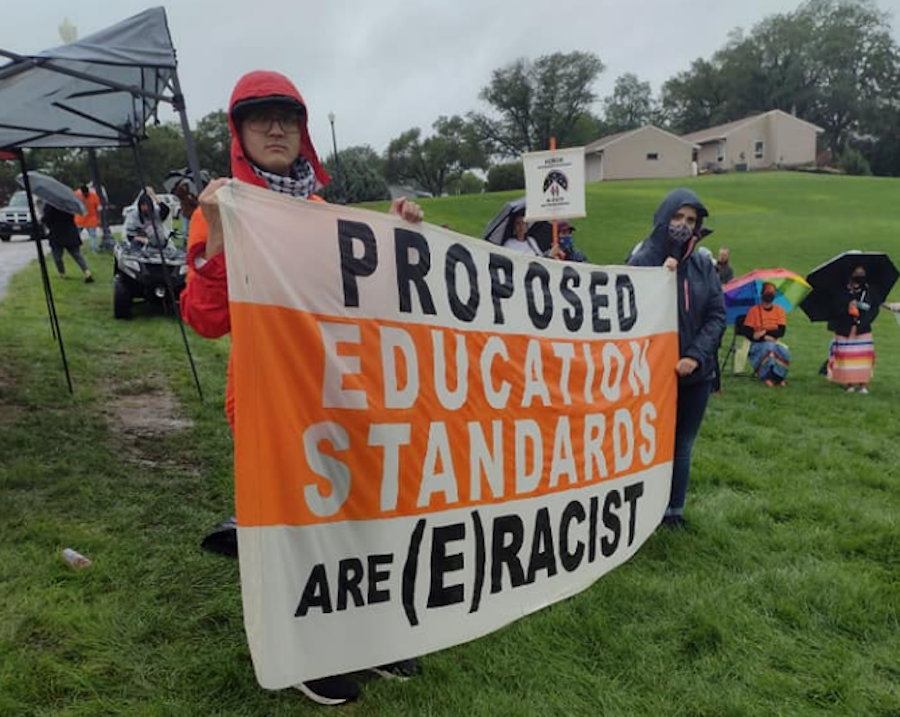 PIERRE, S.D. — Facing bipartisan pressure and calls for her resignation by the South Dakota Education Equity Coalition, South Dakota Gov. Kristi Noem told the state Department of Education to postpone controversial changes to its social studies standards for up to one year to allow for more public input.

Tribes from across South Dakota voiced their ire last month after officials from Noem’s South Dakota Department of Education scrubbed more than a dozen Indigenous-centered learning objectives from the department’s new social studies standards before releasing the document to the public.

The American Indian leaders, educators and community members called the removal of the objectives “Native erasure.”

“Our children were stolen from us in past generation, forcefully assimilated or secretly buried in boarding schools under the ‘kill the Indian and save the Man’ ideologies, and it would seem that the task to erase them has not ended under Governor Kristi Noem’s administration and leadership,” Cheyenne River Sioux Tribe Chairman Harold Frazier said in August.

On Monday, Noem appeared to backpedal on the changes.

“The Department of Education changed the working group’s recommendations to the social studies standards significantly, but it is clear to me that there needs to be more public input to bring greater balance and emphasis on our nation’s true and honest history,” Noem said in a press release.

On Sept. 13 tribal leaders and community members from various tribes held a rally at the state capitol in Pierre to stop the Board of Education from dropping Indigenous references.

A hearing originally scheduled before the state Board of Education Standards committee was moved from Sept. 20 at a middle school in Aberdeen, S.D. to the Ramkota Convention Center for Oct. 25 to accommodate a larger crowd.

Noem’s call for a postponement did not sway Candi Bring Plenty, a member of the South Dakota Education Equity Coalition and Indigenous justice organizer with the ACLU of South Dakota.

“I support the demands of resignation by the SD Equity Education Coalition. And I encourage our Očeti Šakowin (Lakota, Dakota, and Nakota) relatives to register to vote and exercise their civic duty to vote. We are a sleeping giant and our Oyaté across SD have been counted during this Census. We have the numbers to pivot campaigns and we can vote her out,” Bring Plenty told Native News Online.

“Equal access to learning about Native American heritage and culture in our educational institutions is important. Our history must be accurately represented in every classroom,” Bring Plenty said. “A ‘true and honest account of American and South Dakota history’ includes education on Indigenous history and culture.”

Since becoming governor, Noem has had a contentious relationship with South Dakota tribes on several issues related to sovereignty and the use of traditional Native lands.  She fought the Cheyenne River Sioux Tribe and Oglala Sioux Tribe on roadblocks to their reservations last year, as the tribes tried to contain Covid-19.

On Monday, Noem said she plans to ask South Dakota lawmakers to pass legislation to codify her Executive Order, which bans “critical race theory and action civics as the basis for instruction in South Dakota schools.”

“Students are the next generation of leaders who will move us through the journey to a more just and inclusive democracy,” Bring Plenty said. “But unfortunately, states across the country are trying to prevent this by banning discussions about race and gender in schools. This effectively erases the history and lived experiences of people of color, and censors discussion around racism and the critical role it has played in American history.

“The echoes from our colonial past and the history of using education as an assimilationist tool continue to haunt students in our current schools.”