PIERRE, S.D. — The leaders of the Cheyenne River Sioux Tribe and Oglala Sioux Tribe received letters from South Dakota Governor Kristi Noem on Friday telling them they need to remove the checkpoints onto their respective Indian reservations.

On Friday afternoon, both tribes said they would not take down the checkpoints that were installed to keep outsiders out and insiders in the reservation to curtail the spread of the deadly coronavirus.

Oglala Sioux Tribe’s spokesperson Chase Iron Eyes told Native News Online on Friday afternoon that the tribe has no intention to remove the 10 checkpoints at the Pine Ridge Indian Reservation and welcomes an opportunity to sit down with the governor to discuss the matter.

“We are not going to let her treat us like domestic dependents. We make our own laws for our tribal nation,” Iron Eyes said. “Why would we allow the illegal aliens to bring disease onto our homelands.”

Iron Eyes said he feels the Gov. Noem has mishandled the COVID-19 pandemic and has not taken strong enough action.

“She has relied on South Dakotans to exercise common sense and resiliency to fight the virus. Our tribal nation has been stronger with our lockdowns,” Iron Eyes said.

“Many have been inconvenienced by the current situation, but the virus does not differentiate between (tribal) members and non-members. It obligates us to protect everyone on the reservation regardless of political distinctions. We will not apologize for being an island of safety in a sea of uncertainty and death,” Chairman Frazier said in a statement released Friday afternoon. “I stand with our elder Councilman Ed Widow that the purpose of our actions is to ‘save lives rather than save face.’”

In his statement, Chairman Frazier cites the 1868 Ft. Laramie Treaty that says “no white person or persons shall be permitted to settle upon or occupy any portion of the same; or without the consent of the Indians first had and obtained, to pass through the same.”

One Democratic South Dakota state senator, who is a Lakota and Navajo, weighed in on the showdown between the governor and tribes.

“Treaties are the supreme law of the land and must be enforced, even though the state roads go through sovereign tribal nations, they change jurisdiction. Tribes, as sovereign nations, are responsible for protecting our people,” said State Senator Red Dawn Foster, whose senate district covers the Pine Ridge Indian Reservation.

“They have taken into consideration the high number of vulnerable populations with underlying health issues, our healthcare facilities’ capacity, remote location and distance our citizens have to travel for access to healthcare and have determined checkpoints are necessary components to keeping our people safe.” 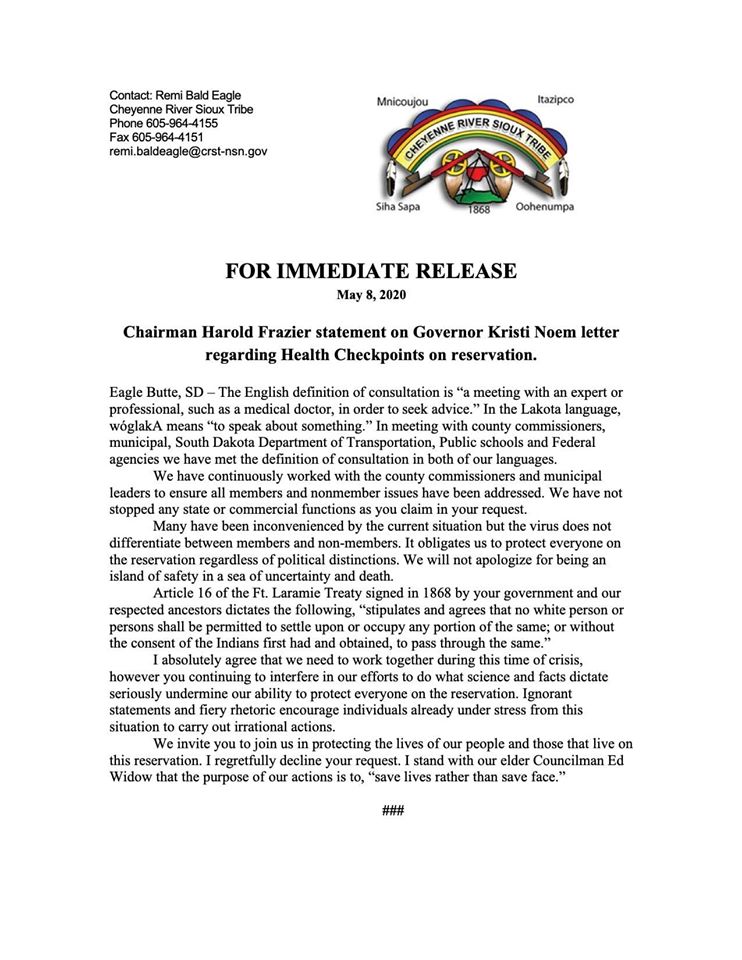 CORRECTION: An earlier version of this story contained an editing error. The spokesperson for the Oglala Sioux Tribes is Chase Iron Eyes, not Clare Iron Eyes.