Get the Book: ‘Visions for a Better Indian Country’ 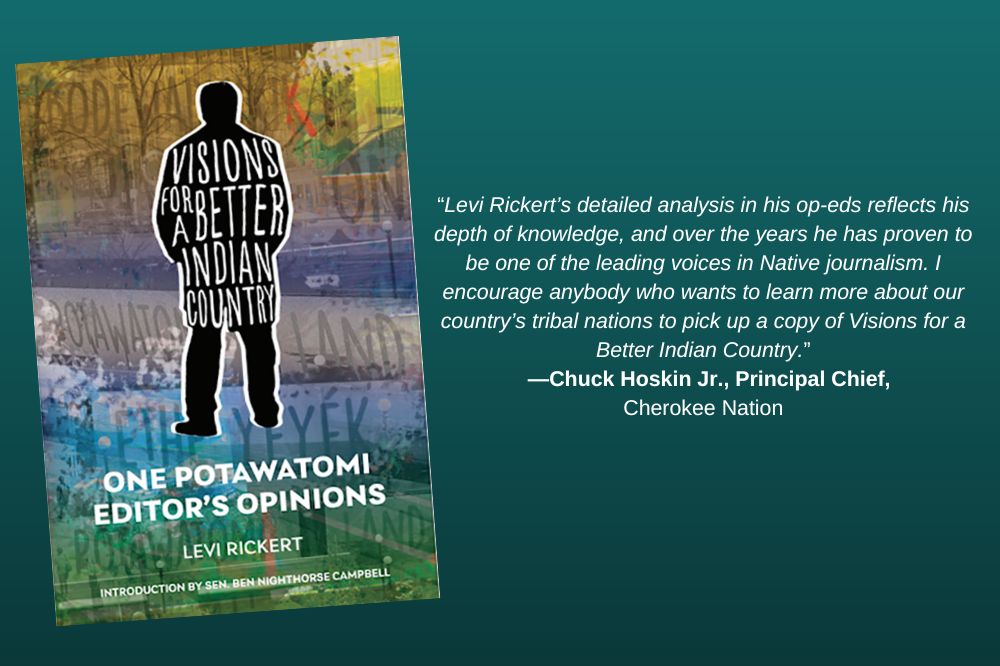 Visions for a Better Indian Country: One Potawatomi Editor’s Opinions is a new compilation of columns by award-winning American Indian journalist Levi Rickert. Written in a straightforward and accessible style, Rickert brings the perspective of a Native American everyman to topics that matter to American Indians and Alaska Natives living in contemporary times.

Threaded through these columns, which were selected from his work between 2020 and 2022, Rickert shares his personal journey as a Potawatomi man, including the realities he’s faced in modern America as an Indigenous person. Faithful readers of Levi’s work will find some of their old favorites and perhaps a few new ones in this collection. For the uninitiated, Visions for a Better Indian Country offers an opportunity to learn about what matters to our nation’s first people from this true Native American voice.

“For more than a decade,  Levi Rickert has been a powerful voice in and for Indian Country. His opinions about social injustice as well as his insightful observations about tribal triumphs have enlightened Native News Online readers and reinforced public perceptions of Native people and communities as multidimensional and dynamic.”

"Through the lens of Levi Rickert, our voices for justice, advocacy, and restoration have been heard around the world. He has touched many lives with his work and leadership and captured the real emotions and trauma of Indian Country into words. Through his vision, we can come together as resilient people and build stronger tribal nations for future generations."

"I believe the broader culture needs to hear more Indian voices and broader Native opinions.  Levi Rickert’s voice is important and his opinions will give you pause for thought, as you find your own path in a world of ideas."

Threaded through these opinion pieces are author Levi Rickert’s visions for improving the lives of American Indians and Alaska Natives living in contemporary times.

The author writes: “I realize no one person is the definitive voice for all of Indian Country, which is vast in size and embodies the cultures of 574 federally recognized tribal nations and hundreds of state recognized tribes. We are not a monolith. Each tribe has its own unique customs, culture and beliefs.”

Even so, Native Americans share many values — community-mindedness, respecting the wisdom of their elders and the sacrifice of their ancestors, living in harmony with nature, and the importance of stories, songs, and traditions.

There are also common issues that tribes and their citizens face in 2022. Some of these are practical, everyday concerns related to health care, education, housing, and employment. Others are more complex:  the generational trauma caused by Indian boarding schools, the epidemic of missing and murdered Indigenous women, cultural appropriation and ongoing efforts to strip Native Americans of their right to vote and  their Tribal sovereignty.

As editor of one of the most-read Native American news outlets, Levi Rickert has covered important events and issues that affect Indian Country, including White House Tribal Nations conferences, Congressional hearings, missing and murdered Indigenous women, Indian boarding schools, and the Standing Rock resistance of the Dakota Access pipeline. A citizen of the Prairie Band Potawatomi Nation, he remains focused on his mission of improving the lives of all Indigenous people.

Make a gift of $30 (CAD $35) or more and you'll receive a signed copy of "Visions for a Better Indian Country" by Editor Levi Rickert.