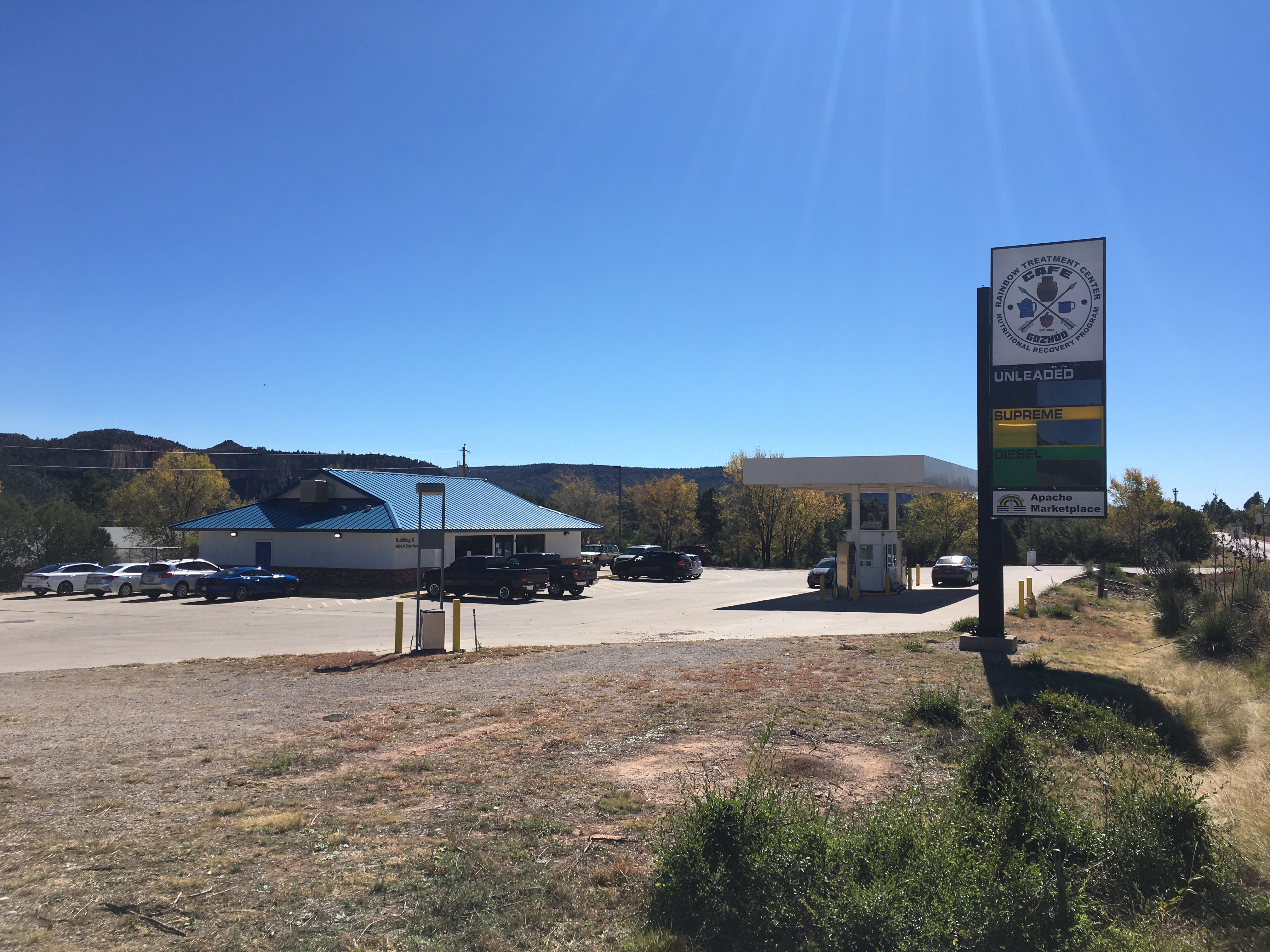 Café Gozhóó, the empty gas station shown as the seeds of a vision in the documentary 'Gather,' is now a busy café open for business at the White Mountain Apache Reservation in Northeastern Arizona. For Nephi Craig, the café’s chef, program coordinator, and creator, it’s the end of a long journey, and the beginning of a new one—one of healing, reciprocity, restoration, and nutritional recovery.

Gozhóó [pronounced go-zhó] is an Apache word that means a lot of different things: happiness, balance, beauty, harmony, love, and respect. It can be used in both everyday casual speech and  song, prayer, and ceremony. “In that one word, we already have the knowledge and skills to recover,” says Craig. “There’s Western therapy culture, and then there’s the Indigenous way. The elements are all pieces. And we have all the pieces. We know it. We've just got to remember it.”

The café operates under the White Mountain Apache Tribe’s Rainbow Treatment Center, whose philosophy is “that personal change and recovery from alcohol and drug addiction for Native American men and women can be achieved through participation in a culturally sensitive, highly structured, therapeutic treatment program.” The center, which runs more than a dozen programs, says dignity and respect are core principles of that philosophy. At Café Gozhóó, they are manifested through food—but that might be oversimplifying it.

In late October, a line of people stood outside the café’s doors for the grand opening. Security guards directed traffic and helped people park. The old gas pumps were surrounded by people: Rainbow Treatment Center had tables set up outside, surveying tribal members about their perspectives on drug and alcohol abuse treatment. Respondents received a T-shirt and an umbrella while they waited.

The energy was the buzz of something new and exciting. Even the dogs ran around the parking lot, greeting new people. But the café, now alive with families and tribal members of all ages, isn't for the legions of documentary fans, or the Indigenous-foods fans who gobble up every Native cookbook they read about in the New York Times.

Café Gozhóó is for the humble Apache people who live in this community, who love it, and who are knowledgeable and expert and passionate in their own quiet way about this landscape, Craig tells Native News Online, and when they come in and see something neat and cool and new, they are put in a space of vulnerability and excitement.

“You know, I think that's healing,” he says.

Inside, the smell of rich fresh coffee, from local roaster Cartel Coffee Lab in Phoenix, wafted through the air. The dining room was filled with tribal members patiently waiting for their food orders: fresh greens, soup, sandwiches, tacos, salads, root veggies, grains, and more. This is not a place for cheap, fast, processed food. There are other options for that in nearby Whiteriver. The beverages served may be carbonated, but they don’t have the sugar and high-fructose corn syrup of the drinks many people are accustomed to. The energy drinks and syrupy sweet beverages that once filled the old gas station’s beverage coolers are gone.

Those former drink coolers are now the café’s walk-in cooler and the prep kitchen. Customers can watch the prep cooks through the old glass doors. The old gas station has been completely renovated. The entire kitchen is open, and guests can see the custom-built, L-shaped line from the dining room. 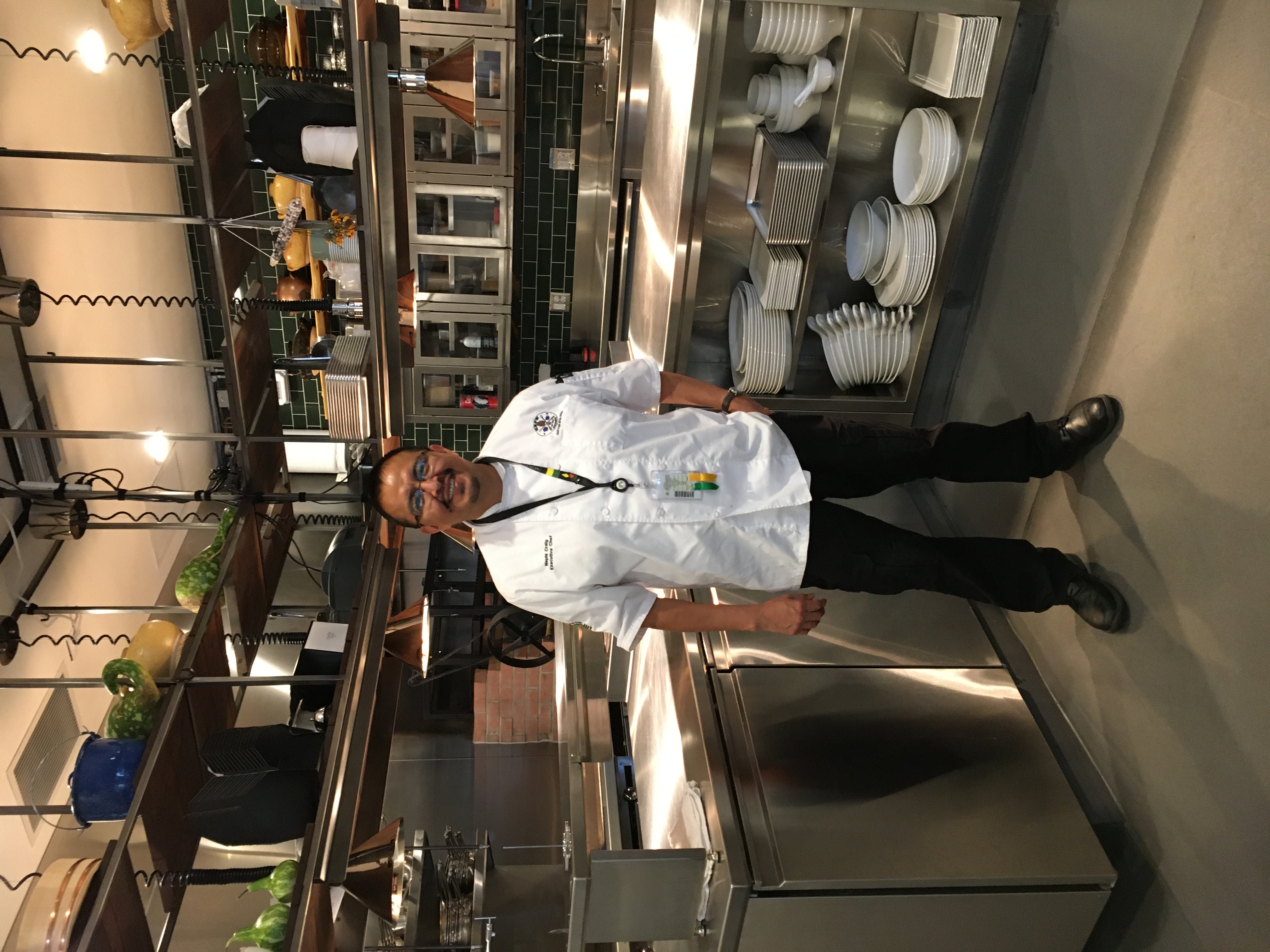 For Café Gozhóó, exposing guests, clients, and staff to the kitchen and new food choices; expanding their food vocabulary; and cooking and tasting and making accessible different food choices, are all part of “nutritional recovery”—a component of drug and alcohol abuse treatment at Rainbow Treatment Center.

Food is too often an afterthought in the recovery process, says Craig, and yet it was at the center of our Native lives for generations. We hold a genetic memory of the foods we’ve eaten for thousands of years, he explains. The flavors, textures, smells, and manners of cooking can ignite within us the restoration that is integral to meaningful and sustainable health, after the trauma of self-abuse has passed.

“When they say you're trying to get clean, you're trying to get sober, trying to reconstruct your life, you can't do the work unless your own house is in order. And usually that means — your body first…. That's what we're attempting to do with the Café Gozhóó: take care of us, get more people cooking and thinking about fresh food, and get people curious and excited about [traditional Apache] basketry again. Then we can think outward. Right now, it's about circulating what's left, and reconnecting the shattered mirror of our identity,” he explains.

That “shattered mirror,” he continues, encompasses the elements that are outside the café—the mountains, the waters, the climate, the animals, the canyons, the elevation. “All of that taught us how to be Apache people,” he says. “The animals, the plants, the food, all of that is woven into our identity. We're lucky that we weren't displaced too much. It's like someone took a mirror, that we once saw ourselves in as a complete reflection, and it got dropped. We're lucky, because we can just kind of piece it back together. That's kind of the way I see it… Café Gozhóó represents an intimate step towards intimate work.” The revitalization of traditional arts and crafts, which revolved around food, is part of that reconstruction.

Meeting the community where they are at is another part of Craig’s work. The second day the café was open, a women’s recovery group toured the kitchen and discussed the traditional foods, recovery, and open jobs that members of the group could apply for. Its larger themes are building relationships, reconnection, and preventing relapse through vocational and job-skills training. Nutritional recovery is not just about eating, but how it helps people progress through the stages of recovery and personal transformation. At the café, that literally and metaphorically includes  the things it takes to keep a house in order, from sweeping the floors to preparing and serving the food to washing the dishes. The cafe also hosts men's recovery groups and vocational groups.

“I’m very excited for this program and what it will do for the community,” KeAloha Douma, attorney general for the tribe, told Native News Online. “Great food, healthy options. It’s a great way for on the job training for our people. And it's beautiful. The whole concept of working to wellness--we have a lot of substance-abuse issues on our reservation. We need opportunities that bring hope to our people. It’s real-life job training that’s transferable. I love it.”

“These guys have learned techniques and have years of experience,” says Darrlando Gordon, a recently promoted prep cook. He says he is excited to learn from Craig and chef Kristopher Bergen, who assisted in the café’s opening.

All of this work is done without the culinary jargon that can turn people off from the fancy-restaurant world and the healthy-foods industry. Sometimes lack of money limits   people's food knowledge. Family and cultural traditions also determine food knowledge. A lot of those factor into how and what people choose to buy and eat. And when someone is diagnosed with a disease such as diabetes, they are often told to give up the foods they have loved, and they might be shamed into eating foods that while technically healthier, actually foster resentment.

Here, there is no food-shaming. Glutinous white bread is on the menu, served with soups or in sandwiches of turkey and ham and cheese, accompanied by local greens and roasted local root vegetables. This is not a dazzle-and-awe, pricey Indigenous wild-foods restaurant. This is serving familiar foods with some humble Indigenous ingredients, while making the recovery and transition into a new way of being delicious.

“Everyone here is used to the greasy tailgate food,” cashier Jasmine Hilton tells Native News Online. She says customers have noticed that the food on the menu is low in sugar, and have asked for sugary sodas. But, she adds, they are happy when they try the café’s offerings. 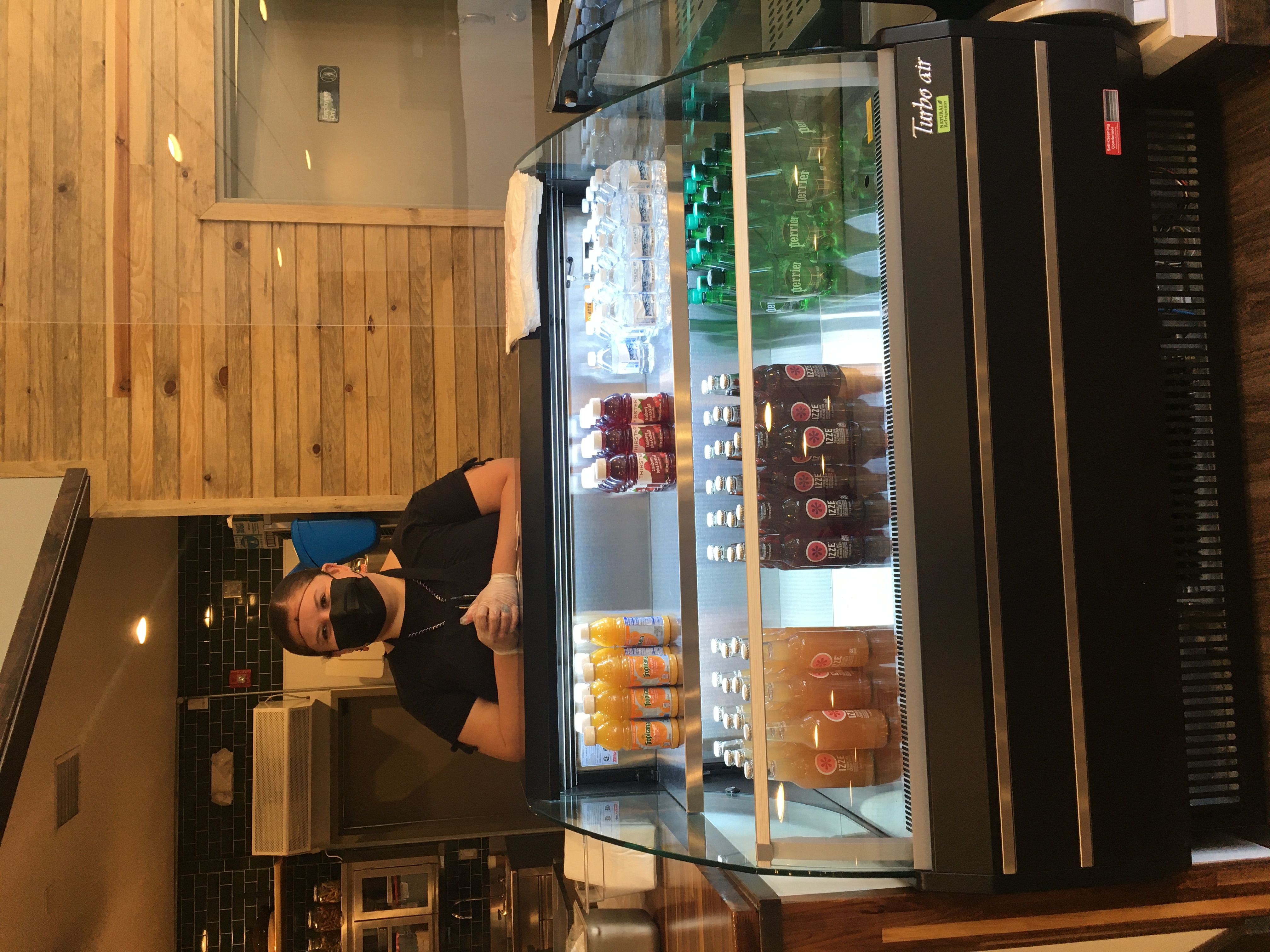 “A lot of the ingredients don't seem like they go together, but it's amazing,” she says, talking about the quinoa and amaranth, which she was able to try for the first time at the café.

“I trust my community knows quality,” says Craig. “I trust my people are highly intelligent [and] know quality when they see it.”

The food is local, fresh, and carries exceptional flavor and seasoning. The prices are graciously affordable, and the portions for one meal could easily serve two. While the cuisine might border on gourmet, James Beard Awards, Michelin stars, or a Zagat rating are not important. These things rate the colonial food system, Craig says, but here, it's more about the sentiments and connections that we make with food ways and each other, a whole subculture that's based on reciprocity. 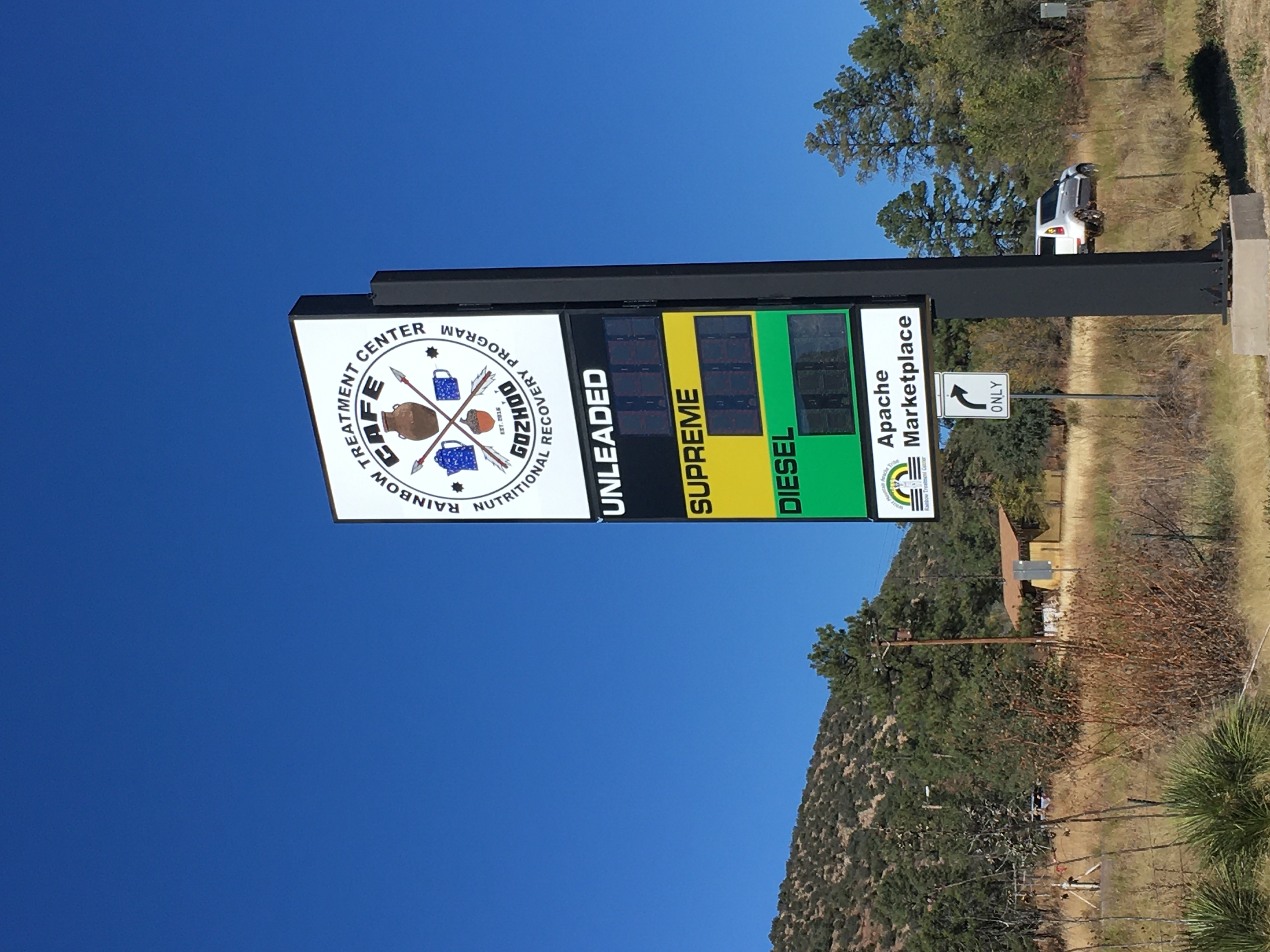 “I hope we can continue to facilitate a safe space for that. It's alive and thriving in its own way,” he explains.

Future plans for the Café Gozhóó include a market, with seed mixes and offerings from the local farm, and even gas at the old pumps--complete with full service, windshield-washing, and tire-pressure checks.

All of this feeds into not only recovery, but sovereignty. “We can leverage our food sovereignty, we can leverage our resources, our traditional ecological knowledge, and our individual tribal sovereignty,” says Craig. “Now is the time to lay the foundation for the next 25 and 50 years in Indigenous food-sovereignty work, food policy, legal work, [and] creating the legal language to articulate how colonial violence in history and in a contemporary setting is a crime, [and] how it hurts the biopsychosocial.”

All of this, he hopes, will lead to more people thinking about the issues and get decision makers to create more programs, with food in mind.

“I feel like there's so much more that that's really, really critically needed. In elementary schools, kindergartens, the elders, feeding sites, food programs--there's just so much untapped potential and revitalization work,” that needs to be done, not just here at White Mountain Apache, but across all of Indian Country. “I just hope people can continue the work and think long term, [and] also try to meet the needs of the community where they're at.”

About The Author
Author: Valerie Vande PanneEmail: This email address is being protected from spambots. You need JavaScript enabled to view it.
Valerie Vande Panne is managing editor of Native News Online. A longtime journalist, Ms. Vande Panne was editor-in-chief of Detroit's alt-weekly the Metro Times and news editor of High Times magazine. Ms. Vande Panne has also been a reporter at WGCU, the NPR and PBS affiliate in Southwest Florida, and she has been a stringer for The New York Times and Reuters. Her work has also appeared in Bloomberg, Columbia Journalism Review, The Guardian, Harvard Law Today, Politico, and Salon, among many other publications. Ms. Vande Panne matriculated at and attended Harvard University.