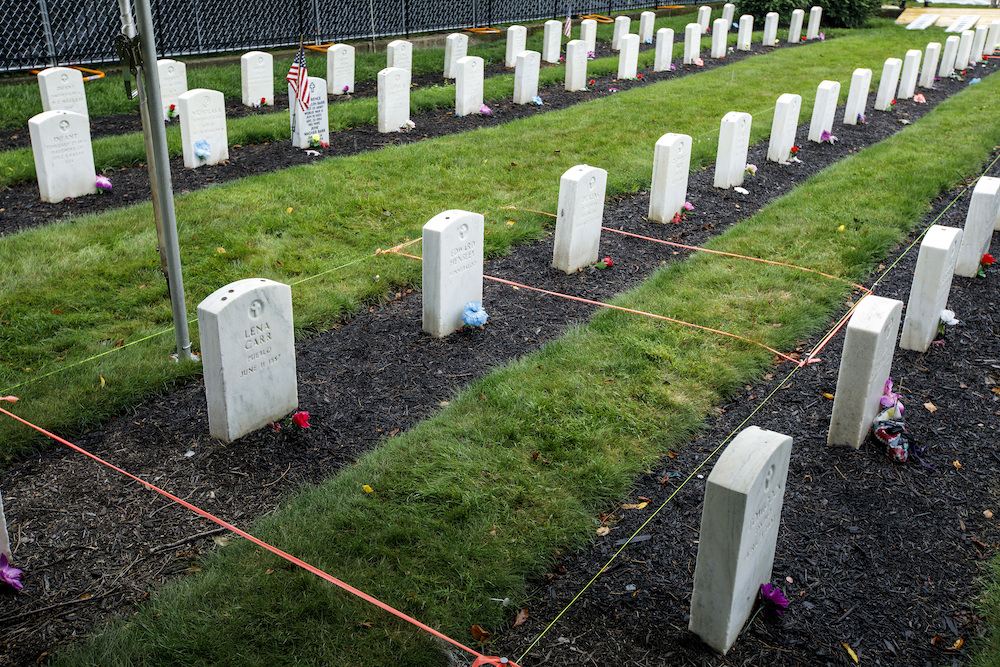 CARLISLE, Pa.—Mary Kininnook (Tlingit) was one of nearly 200 children who died and were buried while students at the Carlisle Indian Industrial School, the nation’s first off-reservation Indian Boarding School. But you wouldn’t know it by scouring the graveyard at the former school grounds.

Despite historic records noting Mary’s death at age 14—caused by pulmonary tuberculosis —and details about her Dec. 28, 1908 funeral service, none of the 173 headstones at Carlisle bear Mary’s name.

That’s because of Carlisle school administrators’ failure to mark and maintain all of the graves promptly and consistently, Carlisle Indian School Digital Research Center archivist Jim Gerencser said. Headstone markings were either washed away over time, or never there to begin with, he said. So when the Army, which took over Carlisle in 1918, moved the cemetery nine years later, they were left with 14 children without known identities.

The Army reburied those 14 children under headstones marked “UNKNOWN.”

But Mary’s identity was known by her late niece and her namesake, Mary Jones, who embarked on a 50-year effort to locate and bring home her relative.

Now, nearly a century later, the Army says it will begin to identify and return those “lost” children buried beneath the ‘unknown’ headstones, beginning with Mary Kininnook.

“The Army is currently working to engage with Native American and Alaskan Native families and communities to address the Native American children who are known to have been buried in the cemetery but do not have a named headstone,” Office of Army Cemeteries spokesperson Ashley Topolosky wrote in an email to Native News Online. “This includes Mary Kininnook.”

‘I know she’s there somewhere’

Hadden, 69, has taken over her late mother’s lifelong effort to bring the remains of Mary Kininnook home. Hadden has visited Carlisle from her home state of Alaska four times seeking information, and flew to Geneva, Switzerland in 2018 to testify to the United Nations Human Rights Council about her great-aunt as one of the missing children lost in the era of Indian Boarding Schools.

“My mother worked on finding her aunt for more than 50 years,” Hadden told Native News Online. “I’m here to finish her work. When she started the search, there was nobody else doing it.” 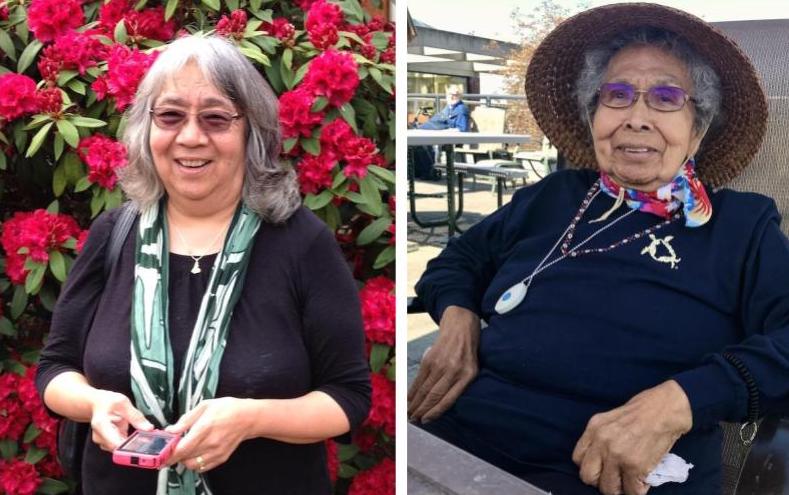 PHOTO: Eleanor Hadden (left) has taken over the 50-year effort by her late mother, Mary Jones (right), to bring home Mary Kininnook's remains. (Photos/Eleanor Hadden)Jones began searching for her aunt in 1967 by writing to Indian Boarding Schools across the country, asking for documentation. It would take another three decades to slowly piece together historic records—including her aunt’s student ID, death announcement, and newspaper clippings about her funeral—to place Mary as one of the “unknowns.”

When Jones first asked the Army about Mary, they were told that she wasn’t buried at Carlisle, and perhaps she was sent home.

Because records from 1908 place Mary’s death and funeral service at Carlisle, but her name does not appear on any of the headstones in the cemetery, historians and Kininnook’s descendants alike believe she must be one of the unknowns. But it will take a forensic anthropologist exhuming the grave to ultimately confirm Mary’s identity based on her gender and age.

“I know that she's there somewhere,” Hadden said. “She has to be. But which one? I don’t know.”

Beginning in 2017, when Northern Arapaho tribal member Yufna Soldier Wolf successfully petitioned the Army to exhume three of the tribe’s children, the Office of Army Cemeteries formalized a  'disinterment of remains' process for returning Native remains to their lineal descendants.

Since then, the Army has paid for four transfer ceremonies, returning a total of 21 children buried at the Carlisle school cemetery to burial grounds chosen by each descendant.

Still, 176 children remain buried at the Carlisle Barracks, including the 14 unknowns and three more recently discovered unknown children found mixed into the coffins with other childrens’  remains in exhumations. In all three instances, the army reburied the unidentified additional children. 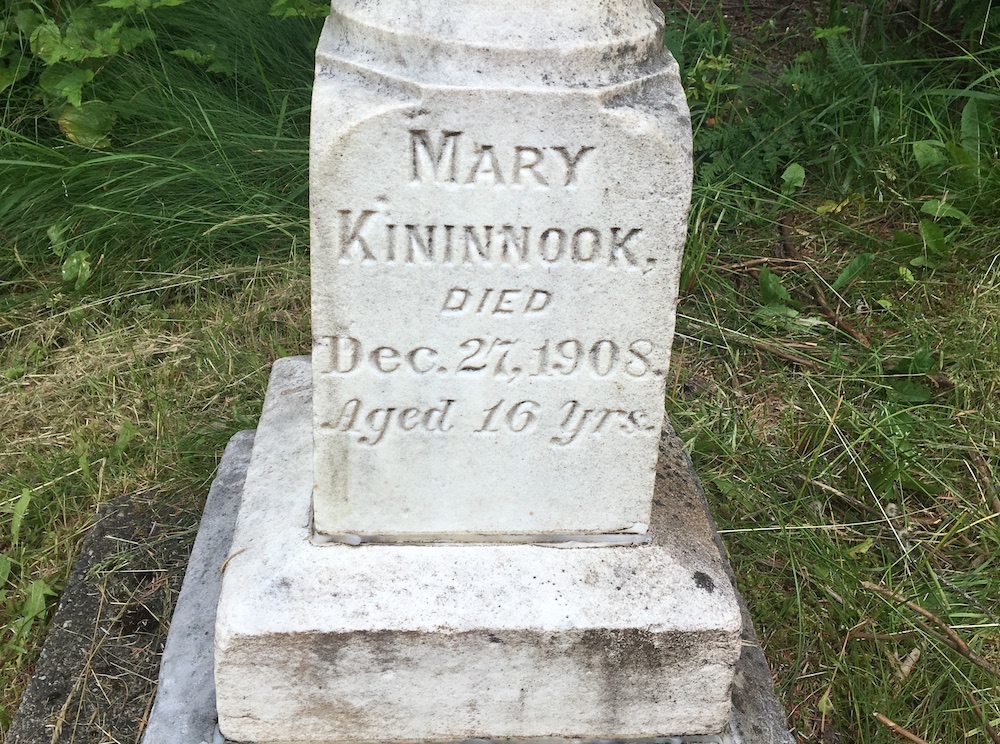 PHOTO: A marble memorial was erected in Saxman, Alaska, Mary Kininnook's hometown, to memorialize her after her family got word she had died at Carlisle. Her age at death is incorrect, she was actually 14 when she died. (Photo/Eleanor Hadden) (Photo/Eleanor Hadden)Longtime Cumberland County Historical Society historian Barb Landis said the Army’s new commitment to identify and return the ‘unknowns’ is a significant milestone.

“The Army's reaction in the beginning was, ‘no, we can't, we can't return any of these graves,” Landis said. “It took 10 years for some of the nations to really push to make that happen for the (buried ancestors) that they did know of. So I think that to be able to identify and uncover the unknown is going to be the last step in this process.”

Inspired by Jones’ efforts to locate her great aunt, Landis embarked on her own multi-decade journey to put names to the lost children buried at Carlisle.

While working at the Cumberland County Historical Society in 2000, Landis started fielding lots of questions from Indian Boarding School descendants that would write, email and call asking for information about their relatives. She began researching students’ records, corresponding with descendants, and even transcribing old copies of the school newspaper to post online, a ritual that cemented her status throughout Indian country as the go-to source on Carlisle Indian Industrial School.

But it wasn’t until Landis met Jones at a powwow the Historical Society hosted to memorialize the children of Carlisle in 2000 that the historian changed the focus of her research.

“That was the first time that I realized that it might be possible to uncover the name of someone in the cemetery,” Landis said.

In more than two decades since, Landis has been able to find records placing seven other Carlisle children—two of them infants—in the cemetery without marked headstones. Archivists and researchers at the Carlisle Indian School Digital Research Center, developed by nearby Dickinson College, later identified two more children, bringing the total number of identified unknowns to nine out of 14.

Though the Army didn’t comment on how they will identify children among the ‘unknowns’, Hadden said a several year age gap among Mary Kininnook and Ella Soisewitza, the only other non-infant girl, would make it easy for forensic anthropologists to assign age.

The Army, working off a 1927 historic plot map, contends that only eight of the unknowns are former Carlisle students, but archivist Gerencser said that it is very likely the additional six gravesites also belong to Native students, staff, or babies.

“That’s what makes it tricky for the unknowns, is noting that they were specifically buried at Carlisle,” he said. “Some documents say they were going to be sent home or died on outing, (but) proving someone isn't buried in the Carlisle cemetery means you have to find out where they are buried.”

The beginning of a movement

Though the Army says it has reached out to all 574 tribal nations to notify them of the named children—including the believed unknowns— that still remain interred at Carlisle, some tribal historic preservation officers say otherwise.

Army policy puts the onus on an ancestor’s lineal descendant to ask the army for a return of remains.

Native News Online reached out to tribal historic preservation officers (THPO) at the eight tribes of the nine identified ‘unknowns.’ Three said they were aware of their specific ancestor being labeled as an ‘unknown’ at Carlisle and had plans to file for their return home.

Sac & Fox THPO Chris Boyd said the tribe is working with its repatriation committee to claim five descendants buried at Carlisle. The Seneca Nation’s THPO Joe Stahlman said Seneca Nation, like many others, does not believe in disinterment “because it could disrupt their afterlife journey.”

Mike Blackwolf, THPO at Fort Belknap Indian Community, said the tribe is aware that one of its ancestors, Solomon Brown, is believed to be buried underneath an 'unknown' headstone at the Carlisle Main Post Cemetery. Brown came to Carlisle in 1890 as an 18-year old from his reservation in Montana, according to his student enrollment card. A letter from the school to the Department of Interior shows he died four years later, reportedly of consumption.

Despite the Army's statement to Native News Online that it's "currently working to engage” with lineal descendants of the unknown children, Blackwolf said his office has not yet heard from the Army.

Still, the tribe is consulting with cultural committees on how to move forward with the exhumations of Solomon Brown and two other relatives who died while attending school at Carlisle.

"I'm close to 100 percent sure that at some point in the near future, we will be working on repatriating our children that were buried over there," Blackwolf said.

Only one tribe, Laguna Pueblo, was unaware of a relative being buried as an ‘unknown’ at Carlisle. THPO Rich Smith said the Laguna Pueblo doesn’t yet have a reburial process in place to handle ancestral repatriations.

Apache Nation, the family of infants Katie Kinzhuna and Eunice Suison, did not respond to Native News Online’s request for comment.

The Rosebud Sioux tribe, which brought home nine relatives from Carlisle in July, said the tribe plans to go back for their ‘unknown’ ancestor, Fred War Bonnet, in addition to several others that remain buried at Carlisle.

Before approving any requests, the Army says it will need to consult with lineal descendants of each individual ‘unknown,’ as well as potentially impacted Federally Recognized Tribes “as disinterment of these unknown graves impacts numerous parties and the US Army cannot open them without agreement from them on the way forward.”

As Hadden and her family wait for final approval and a slated date from the army, she holds her grandchildren extra tight. They’re 9 and 14, the ages Mary Kininnook was when she left Alaska for Carlisle — and when she died five years later.

“To put them on a boat and a train and have them travel thousands of miles at such a young age, I can't even wrap my head around that,” Hadden said. “It makes me hold onto them harder. I give them extra love because I know that Mary didn’t have it.”