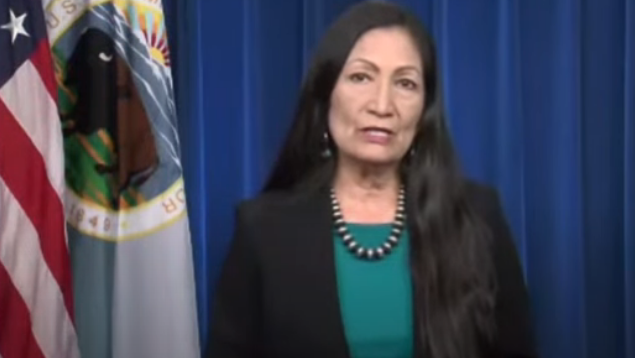 WASHINGTON — Interior Sec. Deb Haaland (Laguna Pueblo) announced a new Interior Department initiative to uncover the full history of the U.S. Indian boarding schools program and protect sites near the schools where deceased students were buried. Haaland made the announcement in her remarks Tuesday at the National Congress of American Indians (NCAI) 2021 Mid Year Conference.

“For more than a century, the Interior Department was responsible for operating the Indian boarding schools across the United States and its territories,” Haaland said. “We are therefore uniquely positioned to assist in the effort to recover the dark history of these institutions that have haunted our families for too long.”

Haaland said the new initiative will identify boarding school facilities and known or potential burial sites near the schools, as well as the identities and tribal affiliations of the students who were taken to the schools. The initiative was prompted by the discovery of the remains of 215 children at the Kamloops Indian Residential School in British Columbia, Canada, according to the Interior Department.

Principal Deputy Assistant Secretary for Indian Affairs Bryan Newland said this investigation of the boarding school system will use historical records, school enrollment lists, “and other vital documents that will help us evaluate the loss of human life.” These documents will come from both federal repositories and non-governmental organizations who were involved with running the schools, such as church organizations, according to a secretarial memo issued by Haaland.

Newland added that the initiative will gather information on previous oversight and implementation of the program. He also said the department will repatriate remains and protect burial sites from development and damage in accordance with tribes’ wishes. According to Haaland’s memo, the department will consult with tribes ahead of time about the potential effects of any work done at burial sites. A final report on the investigation will be due to Haaland on April 1, 2022, according to the memo.

“The legacy of the boarding schools isn’t going away. And one of the ways that we can address that is by taking these steps initially, and trying to bring a measure of accountability to the department’s role in it, and I think at some point there will be an opportunity for us to hear from survivors,” Newland said.

Haaland is the first Indigenous Secretary of the Interior to address the NCAI conference. NCAI President Fawn Sharp expressed the NCAI’s support for Haaland and Indigenous communities in a “new, painful era.”

“As we enter a new era, a new era of truth and reconciliation, a new era where we come face to face with that truth, we are so very grateful for your leadership,” Sharp said after Haaland concluded her remarks.

In her remarks, Haaland emphasized the value of having an Indigenous Interior Secretary leading the department who is descended from victims of the boarding school system. By announcing this initiative, Haaland moves a step closer to shedding light on the system’s history, a goal she pursued as a congresswoman for New Mexico.

According to the National Native American Boarding School Healing Coalition (NABS), NABS worked with Haaland in 2020 when she was a Congresswoman to introduce a bill for a Truth and Healing Commission on Indian boarding school policy in the U.S. In a June 7 press release, NABS said the bill died in session but that it is currently working with legislators to reintroduce it this summer.

“Despite the Coalition’s repeated inquiries, requests under the Freedom of Information Act, and collaborative efforts with the United Nations, the U.S. has never acknowledged its assimilative boarding school policies and refused to provide an accounting of the children that went missing and deaths that occurred at Indian boarding schools in this country,” the coalition said in the press release.

The initiative will be funded by federal funds that were already appropriated for the Interior Department, according to Melissa Schwartz, the Communications Director of the Office of the Secretary of the Interior.

A press release from the Department of the Interior about the new initiative acknowledged that the U.S. government’s Indian boarding school system forcibly removed hundreds of thousands of Indigenous children from their communities for over 150 years to suppress their Native identities, languages, and beliefs. Students endured physical and sexual abuse and neglect, separation from their families, and punishment for acting in accordance with their culture and beliefs. Some of them never returned home.

“The loss of those who did not return left an enduring need in their families for answers that, in many cases, were never provided,” Haaland said in the secretarial memo. “Distance, time, and the scattering of school records have made it more difficult, if not impossible, for their families to locate a loved one’s final resting place and bring closure through the appropriate ceremonies.”

Haaland reflected on the intergenerational trauma caused by the U.S. Indian boarding school system in an op-ed published in The Washington Post on June 11. At the conference, she said that the federal assimilation policies of the past continue to cause “long-standing intergenerational trauma, cycles of violence and abuse, disappearance of Indigenous people, premature deaths, mental disorders, and substance abuse” in Indigenous communities. She also said that after the discovery of the remains of 215 children at the Kamloops Indian Residential School, her thoughts went to the childrens’ families.

“Each of those children is a missing family member,” Haaland said in her remarks at the conference. “A person who was not able to live out their purpose, because forced assimilation policies ended their lives too soon. I thought of my own child, who carries this generational trauma with him. I thought of my grandmother, who told me about the pain and loneliness she endured when the trains took her away from her family to boarding school. I wept with the Indigenous members of our team here at Interior. Our communities are still mourning.”