This past Tuesday afternoon, March 1, 2022, the White House sent out a press release announcing the First Lady Jill Biden’s special guests in her viewing box at President Biden’s first State of the Union, which also included a visit to the White House. Among the eight names was Melissa Isaac, who heads the Michigan Department of Education’s Indigenous Education Initiative. 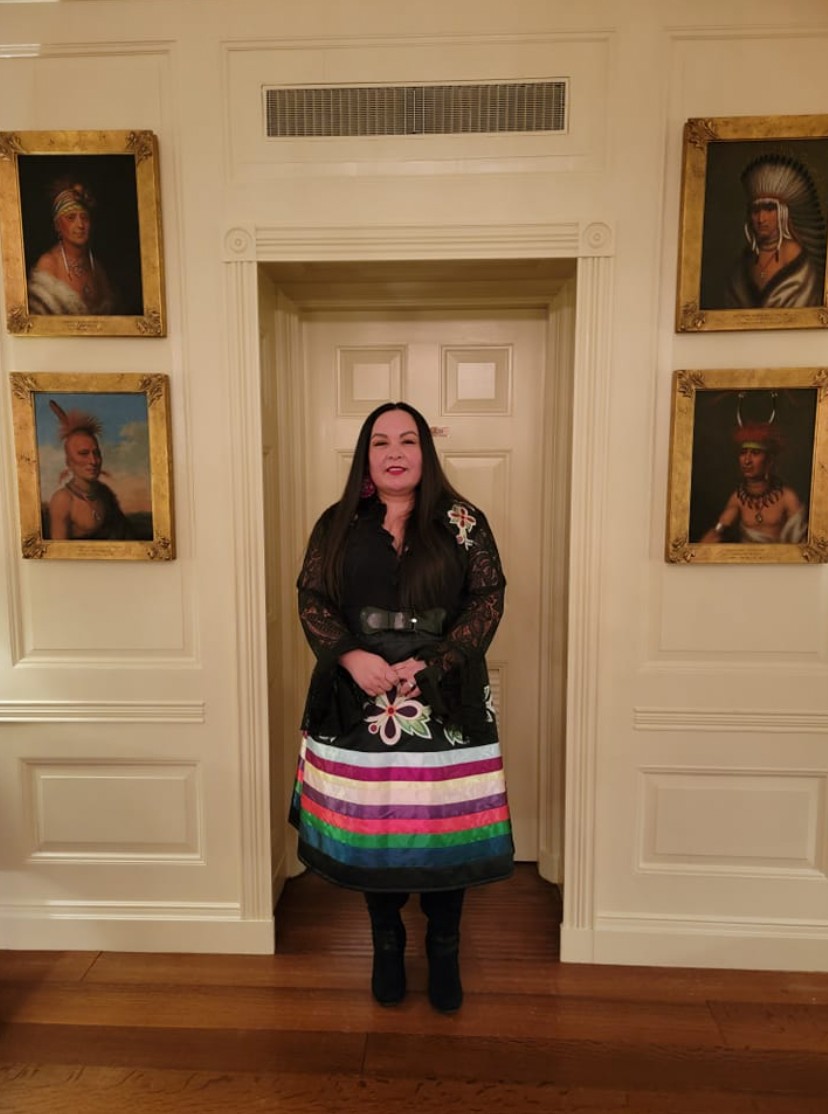 At the time, Isaac was the director of education for the Saginaw Chippewa Indian Tribe. Isaac applied for the Project AWARE grant from the U.S. Department of Education. The grant allowed Isaac to expand mental health services and work with two public school districts in close proximity to the tribe.

The program left a lasting impression on First Lady Biden, who has a doctorate in education. Isaac is pursuing her own doctorate at Central Michigan University.

Since the visit, Isaac left her position with the Saginaw Chippewa Indian Tribe. She told her story of her departure from the tribe during a virtual United Tribes of Michigan meeting. Isaac said she left the tribe after much inner deliberation. She was hired in her current role at the state level. In this new role, Isaac works to further educational achievement for Native Americans students across Michigan.

Isaac showed up at the U.S. Capitol wearing a beautiful ribbon skirt that was seen by millions watching on television as President Biden acknowledged Ukraine Ambassador to the United States, Oksana Markarova, who sat in front of Isaac in the first lady’s viewing box.

Isaac’s traditional attire caused an Odawa friend of mine to write on her Facebook page: “Ummm, seeing a ribbon skirt on tv…during the SOTU…feels pretty good! Other Native Americans social media pages were filled with excitement about Isaac and her ribbon skirt.

While Native Americans were pleased, the right-wing media, such as Fox News and the New York Post, were busy criticizing her for a tweet she made last summer about Critical Race Theory (CRT). Apparently between the time the press release was distributed by the White House on Tuesday afternoon and the time Isaac arrived at the U.S. Capitol to hear the president’s State of the Union address, the right wing media worked to find “dirt” on the first lady’s invited guests.

Apparently, the right-wing media thought they would use Isaac as fodder by discrediting her because she isn’t opposed to teaching Critical Race Theory.

The right-wing media found a tweet from June 2021, where Isaac wrote: “1/2 The argument against teaching Critical Race Theory is a smokescreen. Let’s call it for what it is CENSORSHIP. That’s what we’re really talking about. Censoring systemic racism, injustice, and inequality will NOT ungay the gay, unqueer the queen, nor will it reduce the ….”

Her second tweet read: “number of BIPOC people killed by police brutality. It will not keep my Indigenous sisters from going Missing and being Murdered, and it definitely won’t kill the Indian to save the man…..We are still here.”

I talked to Isaac on Friday morning. She told me she first heard about the CRT ruckus after she arrived in Chicago to make a connection back to Michigan.

“My take on this is they saw an Indigenous person in a space of power and it’s uncomfortable for them. Using CRT is instilling fear. It is about disturbing their power structure, probably mixed with white guilt,” Isaac said about the ring-wing media that wanted to discredit even her presence in the first lady’s viewing box.

“They want to promote a big lie that bad things never happened in American history. CRT is nothing but a huge distraction,” Isaac continued.

Regardless of the right-wing media attempts to discredit her, she was glad to be there to represent. She is proud of her work in the area of increased mental health programs for Native students.

RELATED: The Trail of Tears Should be Part of Curriculum in Every School

“While I was there (at the Capitol), I thought I have thousands of ancestors behind me and I have kids out in the future. I was there representing our kids,” Issac commented.

The right-wing is obsessed with CRT. Isaac, on the other hand, is obsessed with strong educations for Native youth, which includes learning about accurate American history without whitewashing it.

The right-wing took a wrong term by attempting to target Isaac and her good work.