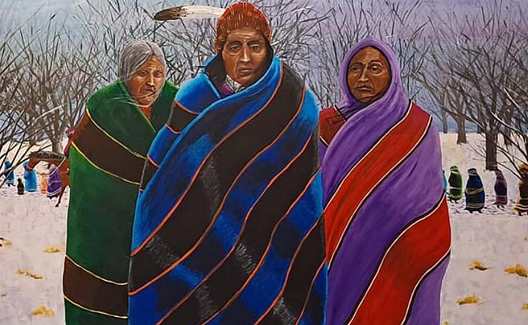 On May 28, 1830, then President Andrew Jackson signed the Indian Removal Act that established a process for the president to grant land west of the Mississippi River to Indian tribes that agreed to give up their homelands.

As incentives, the law allowed the Indians financial and material assistance to travel to their new locations and start new lives and guaranteed that the Indians would live on their new property under the protection of the United States government forever.

With the Indian Removal Act in place, Jackson and his followers were free to persuade, bribe, and threaten tribes into signing removal treaties and leaving the Southeast portion of the country.

The Indian Removal Act set in motion the Trail of Tears, which attributed to the genocide of thousands of Native Americans. Among the tribal people forcibly removed west were the Cherokees to Indian territory located in present day eastern Oklahoma. It is estimated some 4,000 Cherokees died from starvation, disease and exposure during the Trail of Tears.

According to one historical account on the National Park Service website, along the journey west, some drank stagnant water and succumbed to disease. One survivor told how his father got sick and died; then, his mother; then, one by one, his five brothers and sisters. "One each day. Then all are gone."

This history came back to me this past week when I read a tweet by Cherokee Nation Principal Chief Chuck Hoskin, Jr. reacting to a proposal to ban Texas school students from learning about the Trail of Tears.

Chief Hoskin’s tweet said: “Manufactured rage against the non-existent #CRT crisis in schools begets an hysterical effort to ban books, which begets a ban on teaching about the #TrailofTears. #IndianCountry already suffered centuries of suppression. Just stop. https://texastribune.org/2021/10/26/texas-school-books-race-sexuality/… via @TexasTribune”

As the leader of one of the Cherokee Nations, one of the largest tribal nations in Indian Country, the chief’s response was appropriate because he fully understands the deep pain his people suffered during the Trail of Tears.

Further he is correct regarding #CRT, which means Critical Race Theory, an academic concept that claims racism is a social construct that did not originate through an individual bias or prejudice. The Trail of Tears, as well as other Native history, should be part of the curriculum in every school across America.

CRT is a scare tactic used by right-wing people who don’t want the truth taught about the genocidal practices perpetrated against Native Americans throughout American history.

Last summer, Texas Gov. Abbott vowed to have the legislature send him a stronger version for his signature spelling out that race relations cannot be taught in public schools.

Abbott is among several Republican governors who want to forbid critical race theory taught to students. These Republicans act if racism did not exist in the United States. This erasure of reality is called whitewashing history.

Cheyenne River Sioux Tribe Chairman Harold Frazier issued a statement that said withholding the state's history from young minds will negatively impact Native youth in the state by relegating Indigenous people to ‘the bad guy’ in every fantasy about the American conquest.

While there are those who are pushing hard to erase American history, in California, Assemblyman James Ramos (Serrano/Cahuilla Tribe), who is the first California Native American elected to the California Legislature in the state’s 171-year history, is working hard to ensure California school students are required to learn about the history of California tribes.

It helps that California Gov. Gavin Newsom is not paranoid about race relations.

“We mark these important struggles against history but are also mindful of how much more work remains to be done. I thank the governor for reminding us that California is moving forward, and that California Native Americans are not alone in the battle to overcome a history of genocide, enslavement, and other grave injustices,” Ramos said in a press release.

Ramos feels a deeper understanding of Native Americans and their sovereignty will help get rid of enduring racist stereotypes and misconceptions stuck in some non-Native minds.

It is time for education systems throughout the United States to learn more about the Indigenous peoples that are part of American history. We cannot afford to erase a portion of history to protect the power of those who would.