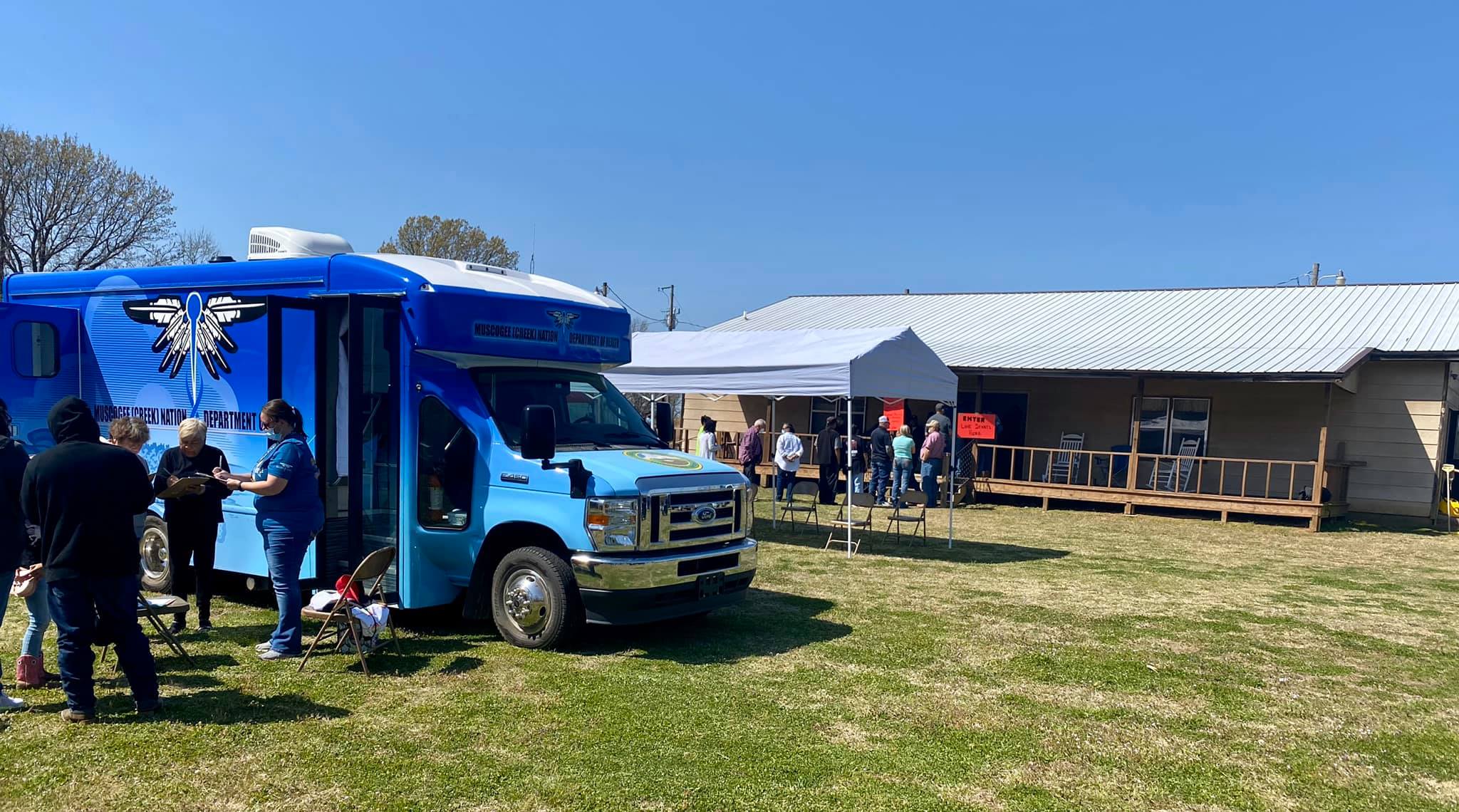 OKMULGEE, Okla. — For Muscogee (Creek) Nation citizens unable to make the trip to urban centers to receive the Covid-19 vaccine, MCN’s Department of Health (MCNDH) is bringing the vaccine to them.

In April, the health department introduced “Little Caretaker On the Go” and “Medicine Runner” to their vaccine deployment effort, two retrofitted buses complete with exam rooms and decorated with the department’s tribal logo.

The buses will travel throughout remote areas of the Muscogee Reservation, including communities 15 to 30 miles from the nearest health care facility. The Creek Nation’s Secretary of Health, Shawn Terry, told Native News Online that even for residents closer to urban centers, proximity does not necessarily equal access.

“There's other barriers,” he said, adding that tribal members further out are often elders and those more vulnerable to Covid-19. “Sometimes it’s having the lack of gas money, having a lack of a vehicle. Also scheduling and finding the time to do that has been difficult in some places. If you can walk over and get it in two minutes, versus thinking you got to spend a half a day to travel and make efforts and take off work, there's some practical reasoning for why people would just go ahead and get it done.”

As of Monday, the Creek Nation has fully vaccinated 27,554 individuals from near and far at mass events and rural areas. Because the event was open to the public and many people—including those who are non-Native—drove from different states, Terry said it’s nearly impossible to extrapolate the number of tribal members that have been vaccinated.

In the coming weeks, Little Caretaker on The Go and Medicine Runner are scheduled to travel to communities such as Okmulgee, Beggs, Bristow, and Cromwell to administer the first and second shots of the Pfizer and Moderna vaccines on a first come, first-serve basis, with no appointment necessary.

The Creek Nation stopped delivering the Johnson & Johnson single-dose vaccines this week after the Centers for Disease Control and Prevention and the Food and Drug Administration recommended an immediate pause on its usage. The pause came after six reported U.S. cases of a rare blood clot in individuals who received the Johnson & Johnson vaccine, out of a reported 6.8 million doses administered nationally.

In addition to vaccination events, Terry said MCNDH plans to meet tribal members outside of their homes, too. On April 1, the tribe hosted a carry-out traditional wild onion dinner—a cultural event and community gathering for the Muscogee (Creek) Nation to come together and celebrate spring while eating their traditional foods.

“Usually, every weekend, during this time of the year, someone is hosting one of these wild onion dinners,” Terry said. “So we had the idea that the best place to vaccinate would be where the people are showing up.”

Tribal citizens interested in receiving the Covid-19 vaccine can call MCNDH at 918-756-0310 to schedule an appointment, or learn about mobile vaccination events near them.