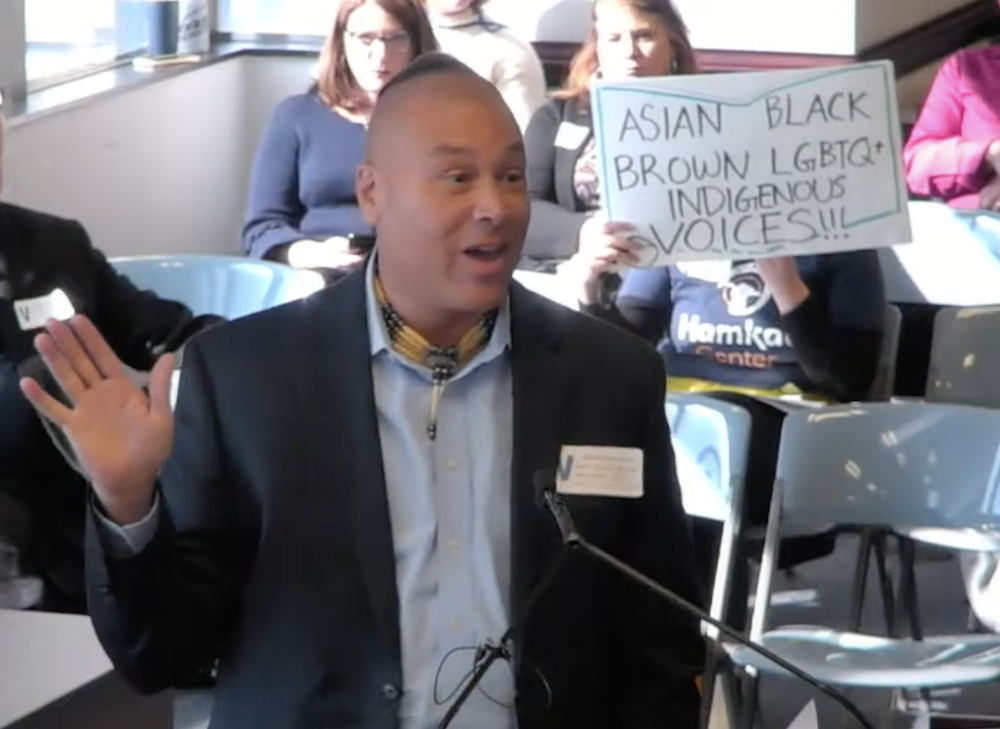 The Virginia Department of Education is apologizing for a published draft of its history and social science standards that refers to the region's Native American ancestors as "America's first immigrants."

The proposed standards, which were submitted by Virginia Gov. Glenn Youngkin’s administration late last Friday, also mandate that students learn about the “entrepreneurial characteristics” of Christopher Columbus, and instruct teachers to “facilitate open and balanced discussions on difficult topics, including discrimination and racism, and present learning opportunities without personal or political bias.”

Alton Carroll, a history professor at Northern Virginia Community College who is of Mescalero Apache descent, told Native News Online that his initial read of the proposed standards stood out to him for being “so glaringly wrong, and so heavily partisan.”

“The idea that Native people were immigrants and therefore they have no more right to land than anybody else is a white supremacist talking point,” Caroll said. “And for that to be reproduced by a governor's office—it's appalling.”

Chief Frank Adams of the Upper Mattaponi Indian Tribe headquartered in King William County, Virginia, told Native News Online that the language used to describe Native people in what is now Virginia is harmful and inaccurate.

“I thought we were making progress and then you read something that’s so derogatory and so ugly and it’s like: how can educated people write these words on paper for the world to see? You can learn a lot of things, but it's really hard to unlearn them.”

Over the past year, a working group of diverse stakeholders has worked to craft new history and social science standards of learning, which Virginia updates every seven years. When the new standards were published late on a Friday evening, Nov. 11, members of the working group were stunned by last-minute changes to the proposed text.

Virginia Sen. Jennifer B. Boysko (D-Fairfax) said the new standards presented “drastic changes” from the ones she helped craft on behalf of Virginia’s Culturally Relevant and Inclusive Education Practices Advisory Committee that met from 2021 to 2022 to recommend new standards to the Department of Education.

“We had focused on making sure that we're telling the stories of all kinds of people who live in Virginia, from our indigenous population and our newer immigrants, people who have come within the 20th and 21st century,” Boysko told Native News Online. “[We were] focusing on being inclusive and looking at history without trying to pretend that it wasn't painful. And I believe that a lot of that has been whitewashed.”

Dr. James Fedderman, president of the Virginia Education Association said that, by contrast, the history standards presented over the summer “were carefully and professionally created, the result of extensive input from both the state’s and our nation’s top historians and curriculum experts” and promoted “rich discussions and critical thinking."

At a Nov. 17 Board of Education hearing on the proposed standards, dozens of Virginians from Black, Asian American, Indian American, Native American, and other diverse communities showed up to testify. Following the meeting, the board delayed action on the new draft and unanimously voted to direct the department to create new standards.

The board further requested that the state superintendent provide a crosswalk document comparing the August, November and combined drafts and correct all factual errors and omissions identified in both the August and November drafts, according to Department of Education spokesperson Charles Pyle.

Superintendent of Public Instruction Jillian Balow apologized for the language in the draft standards describing the ancestors of Virginia's Indigenous peoples as immigrants and promised to correct this error as quickly as possible.

"She deeply regrets that the offending language in the draft standards was not caught and corrected before the document was released to the public,” Pyle told Native News Online. “She also intends to reach out to Virginia's state and federally recognized Indian tribes to express her regrets about this error directly.”

Courtney Wynn, an enrolled citizen of the Chickahominy Indian Tribe of Virginia, testified before the Board of Education on Nov. 17 against the proposed standards.

Wynn told Native News Online that, as a product of the Virginia education system that already reduced Virginia Natives to a footnote in a textbook, the proposed regulations were “disheartening.”

“To start off [kindergarteners’] education with a falsehood that asserts that we emigrated here from Asia—it’s a reductive term, and it’s not true,” she said. “It erases the civilizations that were here for thousands of years, the inherent sovereignty of those nations. Words matter and those simple words wiped away a lot of our history. I wouldn't want kindergarteners learning about us to start by learning a falsehood.”

Chief Adams said that he hopes the Department of Education will start from scratch, and reach out to the tribes and other stakeholders for their input.

“I'm not sure who's writing these standards, but it's pretty obvious that they're not in tune with the population climate of Virginia, and it's offensive,” he said. “I understand it is a very difficult process to write the right standards, but if you don't use the expertise of the Latino community, the Black community, the Native American community, how can you ever expect to get a working standard? You got to call in the people that have lived it and are living the issues for generations.”

Native News Online also reached out to the office of Governor Youngkin about the proposed education standards, but did not hear back.