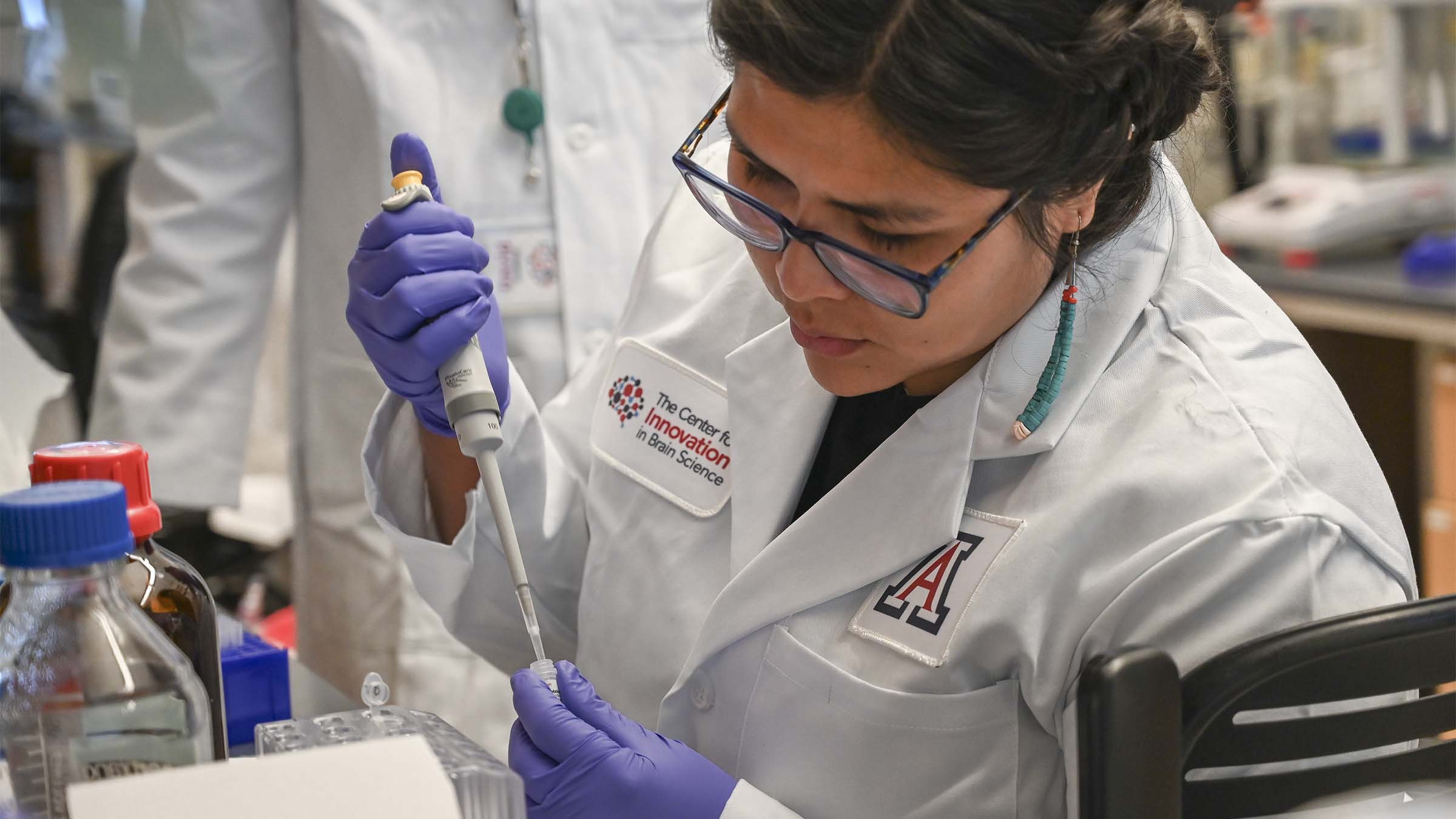 Indigenous communities in the U.S. experience a disproportionately higher burden of disease and lower life expectancy than most Americans. Studies cite higher poverty rates, challenging social conditions, mistrust in the delivery of health services and a history of exclusion from clinical research as factors that contribute to these disparities.

At the University of Arizona Health Sciences, educators and researchers are working to change this legacy and decrease health disparities within Native American communities by introducing Native students to biomedical research. Over a 10-week long summer internship, two students from Diné College, a tribal college located on the Navajo Nation in northern Arizona, visited Tucson to take part in an annual neurosciences program aimed at changing not only the number of Native students in these laboratories, but also the work that happens in them.

“I wanted to build a program that would enable Diné College students to further their education in the neurosciences,” said Kathleen Rodgers, PhD, who leads the Undergraduate Readying for Burgeoning Research for American Indian Neuroscientists (URBRAIN) program. “While many have had dreams of doing it, they hadn’t been able to do so based on resources, opportunities, knowledge of where to go, or having a sense of community when they left.”

Dr. Rodgers, associate director of translational neuroscience at the Center for Innovation in Brain Science and a professor of pharmacology at the College of Medicine – Tucson, leads the program in collaboration with Diné College. The goal is to place Native American students at the center of neurosciences research, giving them a seat in the labs of investigators and allowing room for them to weave cultural nuances and traditions into work that has historically lacked Native voices.

Native Americans currently account for 0.5 percent of the total workforce in the biosciences, a rate lower than any other racial or ethnic group, according to the National Institutes of Health, which funded URBRAIN.

[NOTE: This article was originally published by the University of Arizona Health Sciences. Used with permission. All rights reserved.]

For the Diné College students, the summer in Tucson meant having access to running water, transportation and fresh food. It also meant working in multimillion dollar labs with the latest in technology alongside seasoned experts in brain science.

They learned about genes, proteins and pathways, and how to speak about research with the authority that comes from experience. Angel Leslie and Allyssa Joe, seniors at Diné College, evaluated the impact of Alzheimer’s disease therapies on mice. Diné College program manager Kaitlyn Haskie also took part, working with a mentor and studying tomes on genetics and health disparities among Native populations, written by and from the perspective of Native people.

“When I got here, I didn’t necessarily understand what we were studying,” said Joe, adding that she grew more confident as the weeks progressed. “It makes such a difference seeing it in person over reading about it in an article. In the end, everything just made a lot more sense.”

The students took part in talking circles, which provided the opportunity to ask questions and speak about their work and their journeys in a private, safe space.  As the program drew to a close, students hosted colleagues to a meal, baking fry bread and preparing mutton stew, an important dish in the Navajo culture.

The program seeks to provide a nurturing sense of community with an emphasis on empowerment and confidence-building, allowing students to see themselves as future leaders prepared to have an impact and create change.

Learning from each other

In addition to working alongside researchers, students attended lectures, took part in field trips – including riding the ski lift on Mt. Lemmon – and met with current University of Arizona Health Sciences students, who served as mentors.

“We think of it as finding a relative wherever you are,” Haskie said. “For Navajo students, we talk about our clans, and it’s a bit like finding a relative at the institution – an academic relative, someone who works in the field you are interested in so you can learn more about the subject and how to navigate the system.”

David Bradford, a doctoral student in medical pharmacology in Dr. Rodgers’ laboratory, served as a mentor for Angel Leslie.

“It was something I felt was important,” Bradford said. “It was a great opportunity to try and bridge the social gap between Native Americans and Western medicine. The program also taught me how to teach better. It taught me about Navajo culture and traditions. It really opened my eyes to other views, other communities and the importance of bringing communities together.”

At the conclusion of the program, students presented the findings of their research to their peers, professors and family members. Their growing confidence was evident as they expertly relayed the goals, processes and results of their work.

“Native American community input is needed,” Haskie said about research involving indigenous peoples, where prior misuse and mishandling of medical information and data have led to a deep mistrust of the medical establishment.

“Our bodies are sacred, and for Navajo people, it even comes down to fingerprints. Indigenous scholars are now working to reverse this mistrust,” she added. “We have to do what we can so we are not missing out on research that would help us with our health. It is important to involve the Native community when this research is being done.”

The program is succeeding in what it set out to do – fostering interest in the neurosciences among Native American students such as Leslie, Joe and Haskie, who plan to continue their studies in the neurosciences with an eye toward creating long-lasting, permanent change.

At the end of the program, Leslie spoke about growing in her knowledge of science and gaining trust.

“Even for some students in medicine, it’s kind of hard getting past this cultural boundary,” Leslie said, adding that mentorships and relationship building were particularly helpful. “Programs like this really help Native youth.”

Joe said the experience deeply impacted her life. She is in the process of writing her application for acceptance as a doctoral student at UArizona Health Sciences, where she wants to study neuroscience, pharmacology and immunobiology.

“It was a huge thing for me academically and personally. When I applied to this program, my life was falling apart in both fields,” said Joe, who has been diagnosed with attention-deficit/hyperactivity disorder. “This program gave me the motivation to continue and, all in all, it pulled my life together. The more I think about it, I absolutely want to learn how to do medicine in general, and I know I want to get a PhD.”

Donate
Free Newsletter
About The Author
Author: Margarita Bauzá - The University of Arizona Health SciencesEmail: This email address is being protected from spambots. You need JavaScript enabled to view it.