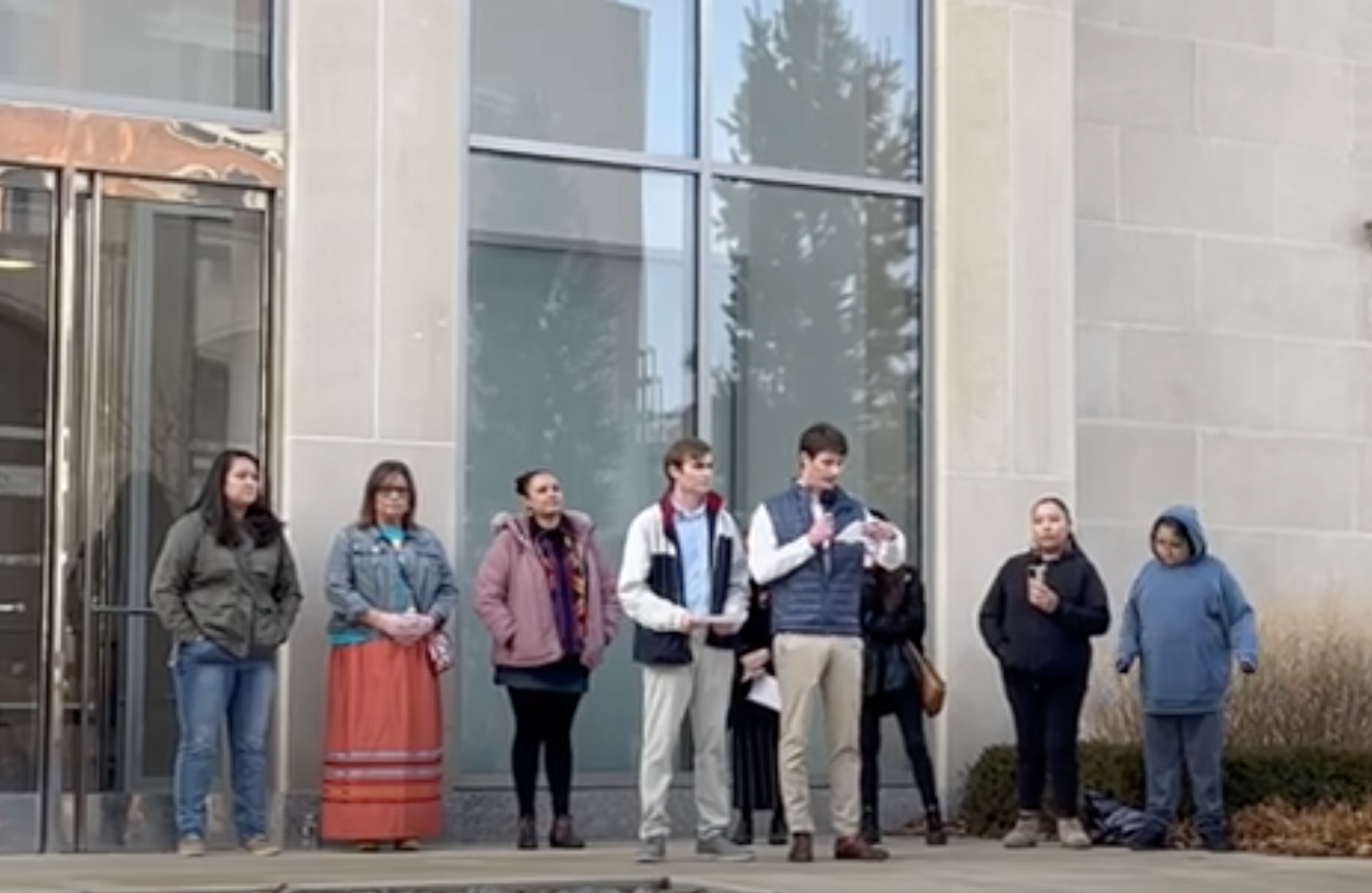 Two defendants publicly apologized on Saturday, Dec. 10, for stealing a panel of an outdoor Native American art installation on the University of Kansas campus last year.

The piece, “Native Hosts,” Hock E Aye Vi Edgar Heap of Birds (Cheyenne, Arapaho), consisted of five metal panels that include the names of the Kaw, Potawatomi, Ioway, Ne Me Ha Ha Ki, and Kickapoo tribes. The theft came just weeks after four panels in the installation were vandalized in an unrelated incident by two defendants in September 2021. Within a day, KUPD recovered and returned to the panel to the university’s Spencer Museum of Art.

John Wichlenski and Samuel McKnight, both 23, faced charges of theft of a value of at least $1,500 but less than $25,000 — level-9 felonies. The defendants agreed to diversions, and as a part of their diversion agreements, both participated in a restorative justice circle facilitated by Building Peace that included representatives from Spencer Museum and KU’s First Nations Student Association (FNSA)

Before the presentation, Spencer Museum of Art Director Saralyn Reece Hardy spoke about “Native Hosts,” noting their thought-provoking design, utilizing the names of tribes who once occupied Kansas before they were displaced.

Native American Student Success Coordinator Lori Hasselman opened the public apology at 2:00 p.m. on Saturday, Dec. 9, to a crowd gathered at the site of the theft in front of The Spencer Museum of Art.

“Restoration is tough,” Hasselman said in her opening statements, “It’s difficult, and it is not easy and it is also very beautiful at the same time. It is having a hard conversation; for some of us, it is confronting trauma.”

“To the artist Mr. Edgar Heap of Birds, the indigenous students of KU, Haskell University, the broader indigenous communities, the Spencer Art Museum, and anyone who felt the ripple effect from the situation,” Wichlenski said.

McKnight noted the restorative circle worked with the defendants to create a plan to further their education of indigenous culture.

“We are very appreciative of this group for providing such a great outlet and platform for a very productive and unifying conversation at the restorative circle. We are beyond grateful for the opportunity to continue working with this group to spread awareness of indigenous history and culture moving forward.”

Wichlenski and McKnight’s remarks were followed by a Kickapoo tobacco song sung by KU student Tweesna Rose Mills. As well, members of KU’s FNSA spoke about the healing process and encouraged the crowd to be inspired by the grace and strength of KU’s indigenous students who spearheaded the restoration process.

“I found my Indigenous identity here in KU... to me, to have instantaneous inclusivity in the Indigenous community is such a huge blessing,” D’Arlyn Bell (Cherokee Nation), a public administration and law & society scholar in KU’s School of Public Affairs and Administration, addressed the crowd. “Hopefully, you can see that one of the things we really want to communicate is that we are inclusive — we are inclusive to non-natives, even to people that hurt us deeply. We really want to be working toward reconciliation.”

KU’s FNSA is working with Wichlenski and McKnight on a presentation for the university’s 34th annual Powwow and Indigenous Cultures Festival on Apr. 8, 2023.

Watch the full apology in the video below.