Oklahoma State Superintendant Thanks Tribes for Investing in State Education 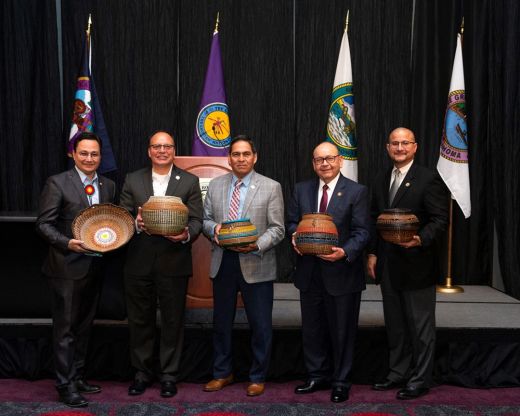 CATOOSA, Okla. – Oklahoma’s State Superintendent of Public Instruction Joy Hofmeister thanked the state’s tribes for their contributions to the state’s educational goals at a quarterly meeting of the Inter-Tribal Council of the Five Civilized Tribes January 10. The quarterly meeting was hosted by the Cherokee Nation at the Hard Rock Hotel and Casino Tulsa.

“My heart is filled with gratitude for the service and the prioritization that you have made over the years for the school children of Oklahoma,” Hofmeister said.

Hofmeister said since the beginning of her term in 2014 the state’s tribes have invested more than $575.8 million in gaming funds to the state’s education system.

“These contributions have steadily risen, despite tribal nations receiving no state subsidies to the gaming industry,” Hofmeister said. 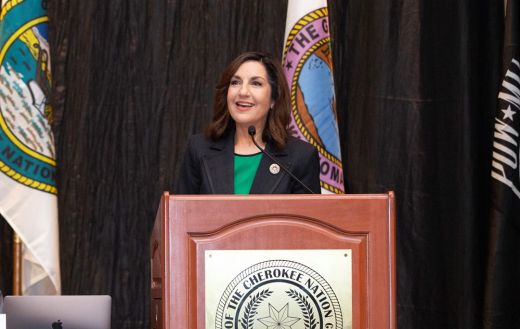 Oklahoma’s State Superintendent of Public Instruction Joy Hofmeister thanked the state’s tribes for
their investment in Oklahoma’s education system at a Jan. 10 quarterly meeting of
the Inter-Tribal Council of the Five Civilized Tribes.

She said these contributions have also been supplemented by Oklahoma’s Native American tribes, both monetarily and through their educational programs and services.

“On behalf of the State of Oklahoma, again, thank you,” Hofmeister said. “Thank you for supporting public education.”

In addition, the council passed a resolution honoring Lisa Billy for her service as Secretary of Native American Affairs for the State of Oklahoma.

Billy recently resigned from her gubernatorial appointed position following the compact renegotiation dispute between the tribes and Oklahoma Governor Kevin Stitt. Billy currently serves as a legislator for the Chickasaw Nation.

“Today, we thank Lisa Billy for her integrity and legacy for tribal advocacy, and we look forward to seeing how she will use her talents for leadership and politics in the future,” said Chickasaw Nation Governor Bill Anoatubby.

Billy was presented with a medal, a drum and a copy of the resolution honoring her.

“We are mighty in our message of unity,” Billy said. “We continue to move forward.”

Tribal leaders said the state’s many Native American tribes are committed to each other, their communities and their state.

“We are united for Oklahoma,” said Choctaw Nation of Oklahoma Chief Gary Batton.

“I’m looking forward to working with each one of you to ensure our partnership is strong and our voices are heard as one,” Principal Chief Hill said.

Tribal leaders said tribal programs and services help more than just the citizens of their respective tribes. They help all Oklahomans.

“Construction and operation of programs and services, combined with governmental and business endeavors, as well as philanthropic and infrastructure projects, make the Chickasaw Nation a crucial driver in the economic activity in our area and in Oklahoma,” said Governor Anoatubby. He said these economic benefits are offered by all of the state’s tribes.

“The five tribes are the best friends that the state of Oklahoma has ever had,” said Cherokee Nation Principal Chief Chuck Hoskin Jr.

In addition to the resolution honoring Billy, the council passed five other resolutions:

- A resolution supporting restoration of the Earned Income Tax Credit.

- A resolution urging congress to reauthorize the Special Diabetes Program for Indians.

- A resolution urging renewal of the Oklahoma Advisory Council on Indian Education Act.

Donate
Free Newsletter
About The Author
Author: Chickasaw Nation MediaEmail: This email address is being protected from spambots. You need JavaScript enabled to view it.