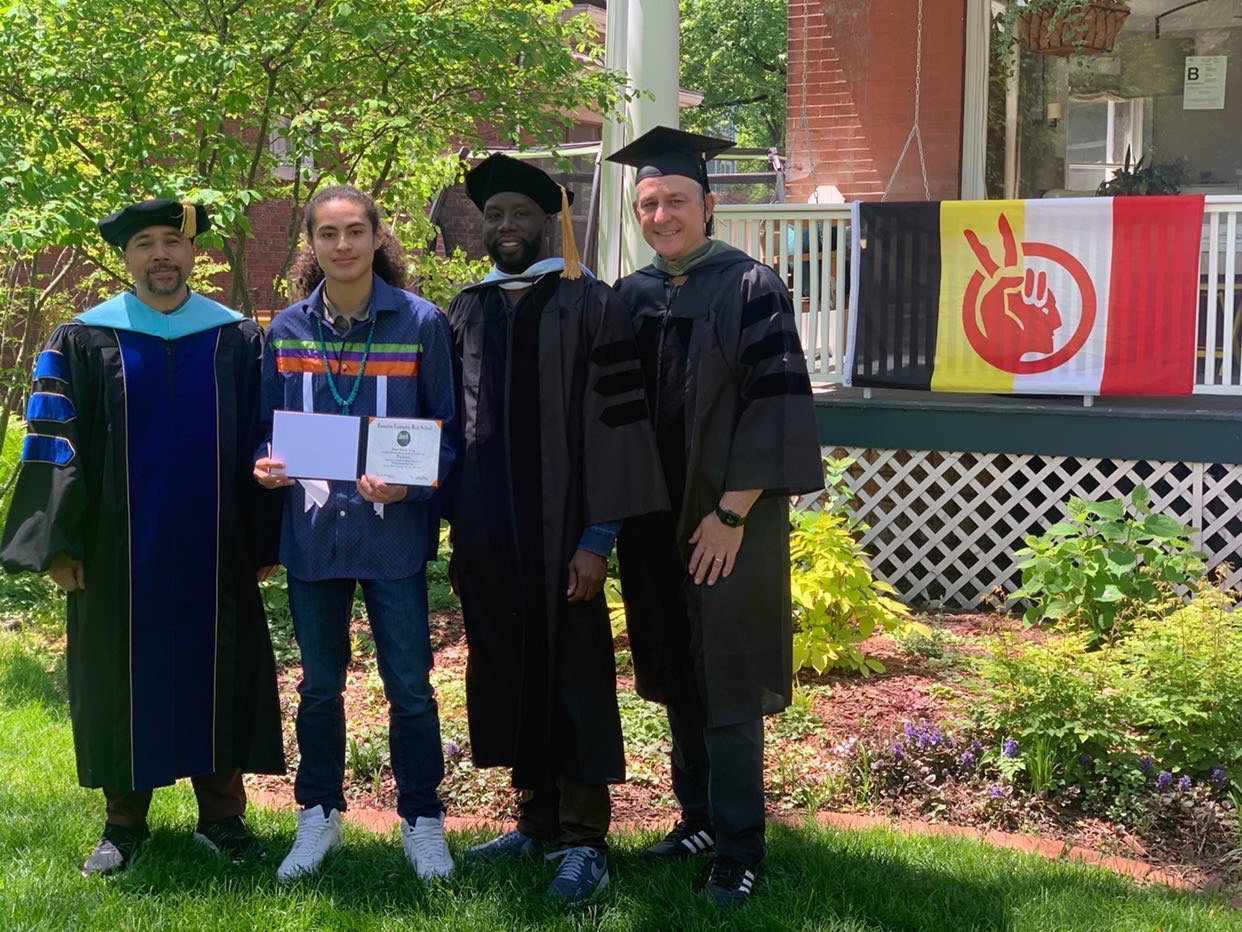 Nimkii Curley is a drummer who has been involved in powwows and volunteering in his community. From mentors and close friends of his family, he received a necklace, a stole with floral beading, a beaded cap with cedar and floral design and an eagle feather beaded with his school colors. 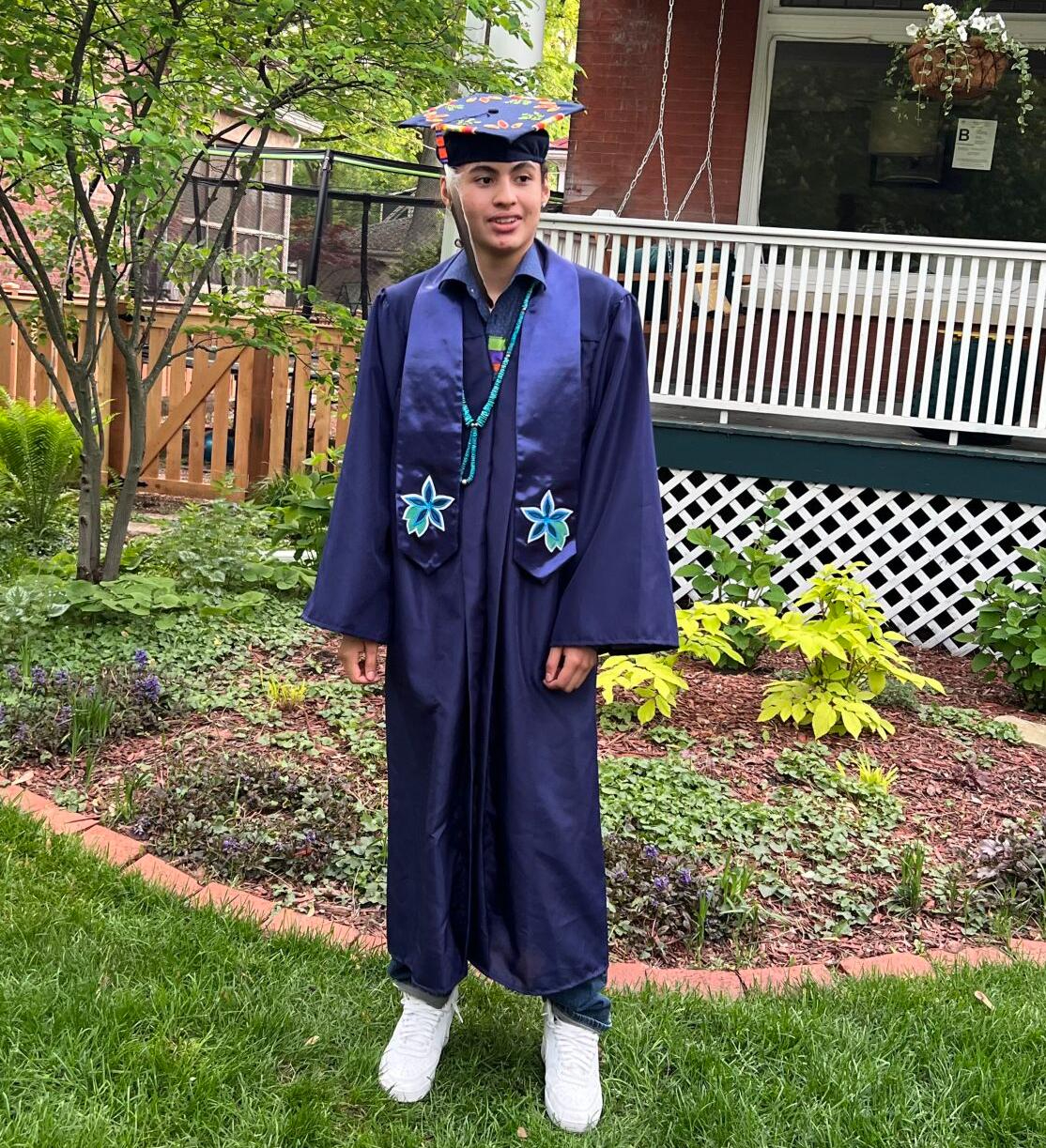 Nimkii Curley (Courtesy photo) “I was very grateful, very thankful for these gifts,” said Curley (Turtle Clan Ojibwe and Black Sheep Salt Clan Navajo), a recent graduate of Evanston Township High School in the Chicago suburbs. “And so I wanted to bring them to my graduation ceremony.”

Nimkii Curley's graduation outfit was adorned with tribal beadwork and he carried a feather. (Courtesy photo) But as Curley stood in line last week to receive his diploma, an event coordinator pulled him out of the line and told him to remove his graduation cap, which was decorated with the traditional gifts he’d received.

Curley refused and stepped out of the line, then walked to the bleachers, where he sat with his family while his classmates received their diplomas. He left part way through the ceremony.

“They were much more insistent ... about getting me to remove my cap and give them my feather and my cap,” Curley said. “I understand the cap a little bit more, because it’s beaded, (but) isn’t as sacred as that eagle feather. But I can’t give over my feather like that to the hands of strangers and a non-Native person.”

The school’s principal apologized to Curley the next day and delivered his diploma to his house.

In a statement provided to Native News Online, Evanston Township High School wrote that it “consistently shared with seniors that additional apparel or adornment on caps and gowns is not permitted during the graduation ceremony,” but will be reviewing its graduation guidelines, particularly as they relate to acknowledging the history and stories of Indigenous students.

In Oklahoma, a security guard tried to forcibly remove an eagle feather from Lena’ Black’s mortarboard at her high school graduation, the Tulsa World reported on May 19. Black had been told by a teacher that the feather’s cultural significance wasn’t out of line with the school’s  graduation dress code.

“I had to take off my cap,” Black (Otoe-Missouria and Osage) told the Tulsa newspaper. “They kept trying to take it off of me. They were up in my space, touching me.”

The National Congress of American Indians (NCAI) and the NCAI Youth Commission have spoken in support of students’ rights to wear regalia at graduation ceremonies. A 2019 NCAI resolution says in part that “despite steps forward in recent years, many schools continue to bar Native students from wearing items of cultural significance, resulting in damage to sacred items and trauma for graduating students.”

Some school districts across the country are updating or reaffirming their policies surrounding cultural regalia, including feathers and other tribal cultural items.

In Alaska, the Anchorage School District updated its policy to allow students to wear items expressive of their cultural heritage and identity during graduation.

In Oklahoma, State Superintendent Joy Hofmeister released a letter that reaffirms the state’s support of Native American students and their religious freedom to display their heritage as the walk for graduation.

But even having a law on the books didn’t solve the problem for two high school seniors in Wichita, Kansas. Two weeks ago, the two Native students were told they couldn’t wear caps with Indigenous beadwork, despite a 2018 law that allows Native American to wear tribal regalia or objects of cultural significance at public events, including graduation ceremonies.

State Rep. Ponka-We Victors, a Democrat from Wichita, expressed disappointment about the situation to a local television station.

“I was angry, I was upset,” she told KWCH.  “We’re four years since that happened, since [that House bill] was signed into law, and here we are dealing with the same thing, trying to fight for who we are as native people.”