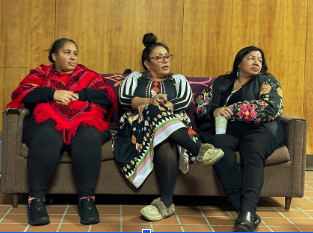 EAST LANSING, Mich.  –  Although Native American Heritage Month, which takes place during the entire duration of November, has come and gone, Native students are still carrying the knowledge they learned from their ‘Aunties’ during a heritage event.

The North American Indigenous Student Organization (NAISO), is an undergraduate focused student organization at Michigan State University (MSU) that creates a safe space for Native students by providing the opportunity for cultural, spiritual, and academic support.

Every November, NAISO puts on a series of Heritage Month events. One this month was an event titled ‘Auntie Chats."

The woodsy aroma of the burning sage fills the NAISO room, with the scent traveling down the halls of Shaw Hall. It’s a comforting cleansing scent that brings a sense of calm to the room and the spaces and people it reaches.

The Aunties come from various spaces in the broader Native community, but all share one thing in common: each of them carry a sense of responsibility to nurture the younger generations.

Shay Sandoval-Flores (Ojibwe/Seminole/Tarahumara) is currently an academic advisor at MSU and was the president of NAISO some 25 years ago. Angie Sanchez (Grand Traverse Band of Ottawa and Chippewa Indians) is a current MSU PhD student with her dissertation focusing on breastfeeding access in Indigenous communities. Stephanie Chau (Little River Band of Ottawa Indians) works at MSU as one of the Assistant Directors of Undergraduate Diversity in the College of Agriculture and Natural Resources.

Immediately after entering the room, you can feel the warmth radiating from each of the Aunties’ smiles. Their laughter fills the room as they recount stories from their youth and share life lessons with the students and answer questions about struggles they are going through.

One student asked how they prioritize and compartmentalize tasks when there is a lot going on in their life both personal and work.

“You have to prioritize and everything is not always gonna get 100 percent, and you have to be okay with that too,” explains Sandoval-Flores. “I am enough. I do enough, I make enough. I eat enough. I'm constantly telling myself that because this world, other people, and sometimes even your friends and family will have you believing that you're not enough and sometimes you have to tell them to kick rocks and be okay with that."

Sanchez, who explains that she would rather “wing-it” than plan ahead, talks about setting boundaries and being comfortable expressing emotions.

“It's just been a lot of learning boundaries and being okay with them even if you might feel bad about it, but I've had to learn how to sit with my feelings and just let them be even though I don't like it.”

Chau, who is the complete opposite of Sanchez, explains that she is a chronic over-planner.

“I am an over-planner. I like to plan. It does drive people nuts sometimes. I am definitely a planner because for me that works to reduce stress. The more you can plan, the less stressful life and everything is. I wish I used it in my younger days. I used to be able to wing it more,” said Chau. “And setting those boundaries is important. Being able to say no is one of the most important skills you can learn.”

During the event, a facilities worker from Shaw Hall interrupted the conversation and asked if NAISO would put out their smudge. Burning sage, or smudging, is a protected religious practice that Native students are permitted to do in all spaces, only some spaces require prior permission. In this case, we had our waiver, so we let the smudge to continue to burn.

Despite the interruption, the Aunites continued to provide knowledge and advice for the students. Sanchez shares her experience with others being petty or negative towards her and how she responds.

“I try to get to the root of why they are being petty to me. Like what's driving that? After that, it's a matter of how do I want to process that? Is that person somebody that I have an interest in? Like having a relationship with? Or is this somebody who I think is so damaged that they're not going to heal no matter what I do or say? Or is it somebody who's just legit crazy like who's legit, like bonkers, right?” She goes on to explain the potential root of conflict. “We're dealing with stuff that we don't even know that we're dealing with because of all the things that our ancestors have been through.”

For the students at MSU, the knowledge and wisdom shared by the Aunties are bigger than reaching out, it’s part of the larger effort to value and emphasize matriarchal knowledge.

“I think it was really awesome to hear not only their answers to the questions, but also their stories of resilience and hearing their stories. I can find similarities between their stories and mine, or you can also just recognize that they definitely worked really hard for what they've wanted and it's really inspiring,” explains fourth-year MSU student Nevaeh Marshall who is also a citizen of the Sault Ste. Marie Tribe of Chippewa.

Marshall explains that they are glad to see a larger valuation being placed on matriarchs, and even includes two-spirit and queer identifying individuals in the definition of what makes a matriarch.

“I honestly think that sometimes even the matriarchal values can get lost even in Native spaces. When I was growing up, I felt like there was a lot of toxic masculinity and not respecting women within those spaces,” Marshall explains. “Lately, I've been seeing a lot more matriarchy stuff going around and I feel like that's really cool. It's important to hold women on this sort of pedestal because women are sacred. We're all born from women, and it makes sense that we would be matriarchy.”

Marshall, who has a close relationship with Auntie Chau, demonstrates the importance of fostering guidance-centered relationships between the older and younger generations.

“I can go to her [Chau] as one of my own Auntie's, and ask her for help and get her guidance.”