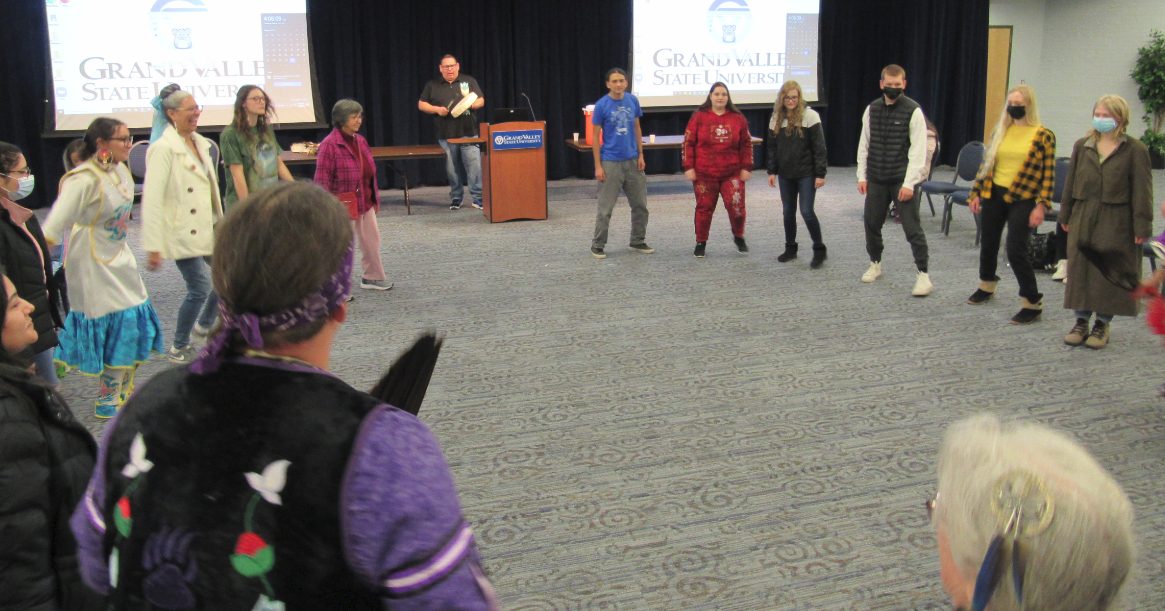 Grand Valley State University's Office of Multicultural Affairs closed out the month of March with Indigi-Fest, a 2022 expo experience that celebrated Anishinabeck heritage with local speakers and perforrmers.

Indigi-Fest was held in lieu of the spiring powwow because of the COVID-19 threat. Grand Valley State University is located in Allendale, Mich. with other campuses in West Michigan.

"Instead of our traditional spring powwow, our Native American Student Association (NASA) decided to conduct a campus cultural exchange in a way that encouraged open dialogue with our presenters. We had various university classes come to our presentations as part of their curriculum," Lin Bardwell (Little Traverse Bay Bands of Odawa Indians), Native American Student Initiative Coordinator at Grand Valley State University said. "This lent itself to personal engagement between our local Indigenous community and our campus community."

On both days the afternoon session ended with powwow dancers and a drum. Students were afforded explanations on various powwow dances.

"The regalia that we wear comes to us in a divine way. It comes to us through the colors and feathers. It's laid upon us through the spirit. We believe that the creation and the manifestation of this regalia is a spiritual thing," Punkin Shananaquet (Potawotami/Ojibwe), a respected jingle dress dancer from Hopkins, Mich., explained to the students.

Because powwows were not geneally accepted by non-Native people during much of the 1900s, Shananquet said Native people did not have books on how to make their regalia. As the powwows became more accepted during the 1970s, especially after the American Indian Religious Freedom Act was enacted in 1978, Native people had to rely on the spiritual inspiration to create the regalia worn by powwow dancers.

Mike Medawis (Ottawa/Potawatomi/Ho-Chunk) provided drumming and singing on Thursday. He spoke about various songs that are given for thanksgiving and honor.

"There is a responsibility that goes with singing and drumming. I've been blessed because I learned to drum as a kid. There were programs that I went to practice. So, I'm thankful for that," Medawis said.

Free Indigenous food samples, such as wild rice, were offered.

Bardwell says the event was so successful, Indigi-Fest will be back on campus next year.