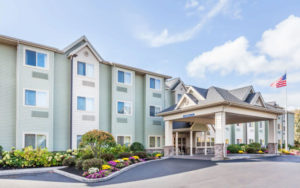 The Oneida Indian Nation acquired a Microtel Inn & Suites hotel in upstate New York and plans to reopen it this week as Sandstone Hollow Inn, according to a news release.

The Tulalip Tribes in the state of Washington acquired a seafood processing facility in Blaine Harbor from Sound Pacific Seafoods LLC, according to a report in The Northern Light. The 8,000-square foot building is located on land leased from the Port of Bellingham (Wash.), which reportedly approved a lease assignment to the Tribe. The Tribe told Northern Light plans to expand the business, which sells seafood to markets on the West Coast and in Asia.

The Penelakut Tribe acquired the iconic 49th Parallel General Store, according to a report in the Victoria News.  The store is located next to the Penelakut-Thetis Island ferry terminal in Chemainus, a community on the southwest end of Vancouver Island in British Columbia, Canada.  After acquiring the store, the Tribe changed the name of the shop to the Salish Sea Market. The Penelakut told the Victoria News is still developing a plan for goods the store will carry, the number of employment positions it will create and other aspects to the business.

The Federal Reserve Bank of Minneapolis named Casey Winn Lozar as a vice president and director of its Center for Indian Country Development, a research center focused on economic development and prosperity of Native Nations across the United States. The Minneapolis Fed established the Center for Indian Country Development in 2015 to address disparities in economic outcomes in Indian Country. To date, its work has largely been focused on promoting homeownership in Indian Country, but it has researched diverse issues impacting Indian Country: labor force participation, returns on higher education, manufactured housing, credit scores, and mortgage lending, among other topics.

A new study shows the Choctaw Nation of Oklahoma had an economic impact of more than $2 billion in Oklahoma during 2018, according to a report in the McAlester News-Capital. The tribe supported nearly 17,000 jobs in Oklahoma in 2018, generating nearly $800 million in wages and benefits, according to the report. Over the last decade, Choctaw Nation invested more than $100 million in state roads and highways, $45 million in education and paid more than $250 million to the state of Oklahoma in exclusivity fees under the gaming compacts.  The exclusivity fees support education in the state of Oklahoma.

The Eastern Band of Cherokee Indians closed on the purchase of 198 acres of land east of Knoxville, Tenn. on Jan. 31, according to a report in The One Feather. Tribal officials said there are no immediate plans to pursue gaming on the newly purchased property and did not disclose the price paid for the property. Principal Chief Richard Sneed confirmed the purchase of land and told a local ABC-TV affiliate that the land would be used for “future economic development.” The recent purchase adds to the Tribe’s property holdings in the area. In 2019, the Eastern Band of Cherokee purchased 122 acres off Exit 407, north of the Tennessee Smokies stadium.

The Lytton Band of Pomo Indians has begun construction work on their long-awaited rancheria, which will be built on 511 acres in Sonoma County, Calif. The rancheria plans call for 147 homes, a 200-room resort and a 200,000 case winery, according to a report in The Press Democrat. The development became possible after a bill that placed the land in trust was passed by the federal government on Dec. 20. The Lytton Rancheria Homelands Act of 2019 (HR 1388) was introduced by Jared Huffman (D-San Rafael) last February.

The Shingle Springs Band of Miwok Indians bought a 10.69-acre parcel of land north of its Red Hawk Casino in El Dorado County, Calif., according to a report in the Mountain Democrat. The tribe hasn’t announced a development plan for the $1.5 million parcel, but developing housing for tribal members is under consideration, according to a tribal spokesperson.

Generex Biotechnology Corporation announced its Olaregen Therapeutix subsidiary has won approval to begin shipping its Excellagen wound-management product to the Indian Health Services in Arizona.  Excellagen is an FDA-approved gel matrix used to manage 17 types of wounds, including diabetic foot ulcers and venous leg ulcers, which are prevalent in the diabetic patient population. Native American Indian adults are almost three times more likely to have diabetes and 2.5 times more likely to die from the complications of diabetes than the majority of other Americans, according to a Generex news release.