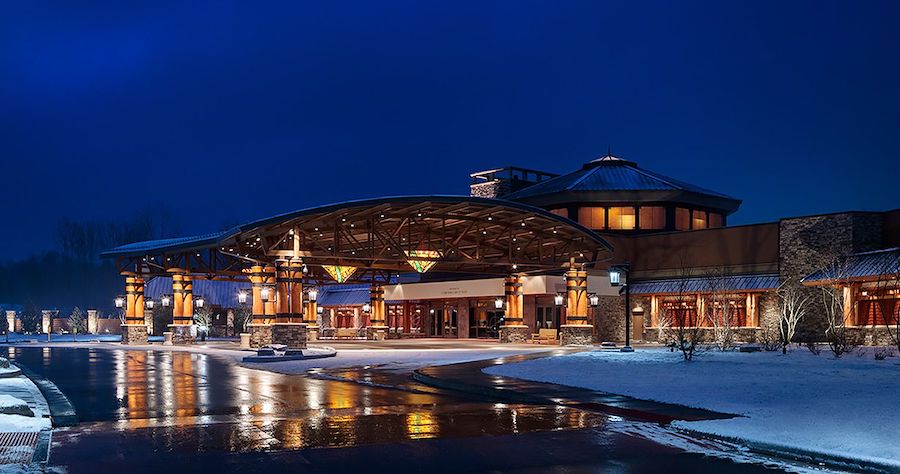 SOUTH BEND, Ind. — There was excitement in the air on Thursday morning as the Four Winds South Bend casino unveiled its Class III gaming after a compact was signed between the Pokagon Band of Potawatomi Indians Gaming Authority and the State of Indiana. The excitement was shared by Pokagon Band of Potawatomi Indians Tribal Council Chairman Matthew Wesaw, who also serves as CEO of the tribe’s gaming authority, along with Indiana Governor Eric J. Holcomb and National Indian Gaming Association Chairman Ernest L. Stevens, Jr.

All three spoke of the historic significance of the casino obtaining Class III gaming through the state compact. During former vice president Mike Pence’s time as governor of Indiana, he would not even enter into negotiations with the tribe to operate a Class III license. The tribe moved forward and opened the casino as a Class II facility with limited the type of electronic gaming machines and allowed no gaming tables. After Pence became vice president of the United States, Gov. Holcomb became governor and was open for discussions with the tribe.

“There were many who did not believe we could negotiate a gaming compact with Indiana. I was not one of the nonbelievers,” Chairman Wesaw said. “I knew the right time would come –– along with the right people –– who would be in office and at the table.”

Gov. Holcomb was the right person, Wesaw said. After he became governor, Holcomb spotted a few Pokagon leaders in an audience at an event and sent an aide over to them to see if they would be willing to talk, according to a former Pokagon Band official. The tribal leaders at the meeting were willing to sit down with Gov. Holcomb immediately after the event.

“This is a historic day. The constant communication back and forth. We dotted every ‘i’ and crossed every ‘t.’ That is how we arrived  where we are today. I have never been prouder as a member of one of those sovereignties,” Holcomb said. “The expansion and gaming upgrade will help the facility become an economic driver not just for the region, but for the state.”

“Not only is Class III gaming in Indiana historic and an important milestone for the Pokagon Band and our Four Winds Casinos, but the expansion of Four Winds South Bend will create numerous economic benefits with the State of Indiana and the City of South Bend,” Chairman Wesaw said.

For National Indian Gaming Association Chairman Stevens, the day was more significant than when the casino opened with a Class II license.

The compact was signed earlier this year, but the gaming authority waited until Thursday to implement Class III gaming. The compact calls for the State of Indiana to receive eight percent of the profits. Also included in the compact is the establishment of a $1 million education fund that will allow Pokagon citizens to attend two- and four-year Indiana state-funded colleges or vocational schools with all expenses paid.

“When you play a Class III game, the outcome is you against the game. It’s one-on-one,” Four Winds Chief Operating Officer Frank Freedman said. “Class II gaming, you need more participants. You’re on a server and it’s basically a bingo algorithm that gets converted into game math.”

Freeman is confident that the gaming upgrade will increase business at Four Winds South Bend.

To accommodate the influx of additional business from the upgrade to Class III, construction is underway for an expansion to include a 23-story hotel tower with 317 guest rooms, including 83 suites. The hotel will include a spa, convention area, meeting space, a ballroom, lounge, bar and grille, an outdoor roof-top swimming pool, and terraces. Construction is anticipated to be completed by the first quarter of 2023.

The Pokagon Band of Potawatomi Indians. based in Dowagiac, Mich. operates three other casinos in Michigan. In 2007, Four Winds Casino Resort opened in New Buffalo, followed by Four Winds Hartford in 2011, and Four Winds Dowagiac in 2013. Four Winds South Bend opened in 2018.