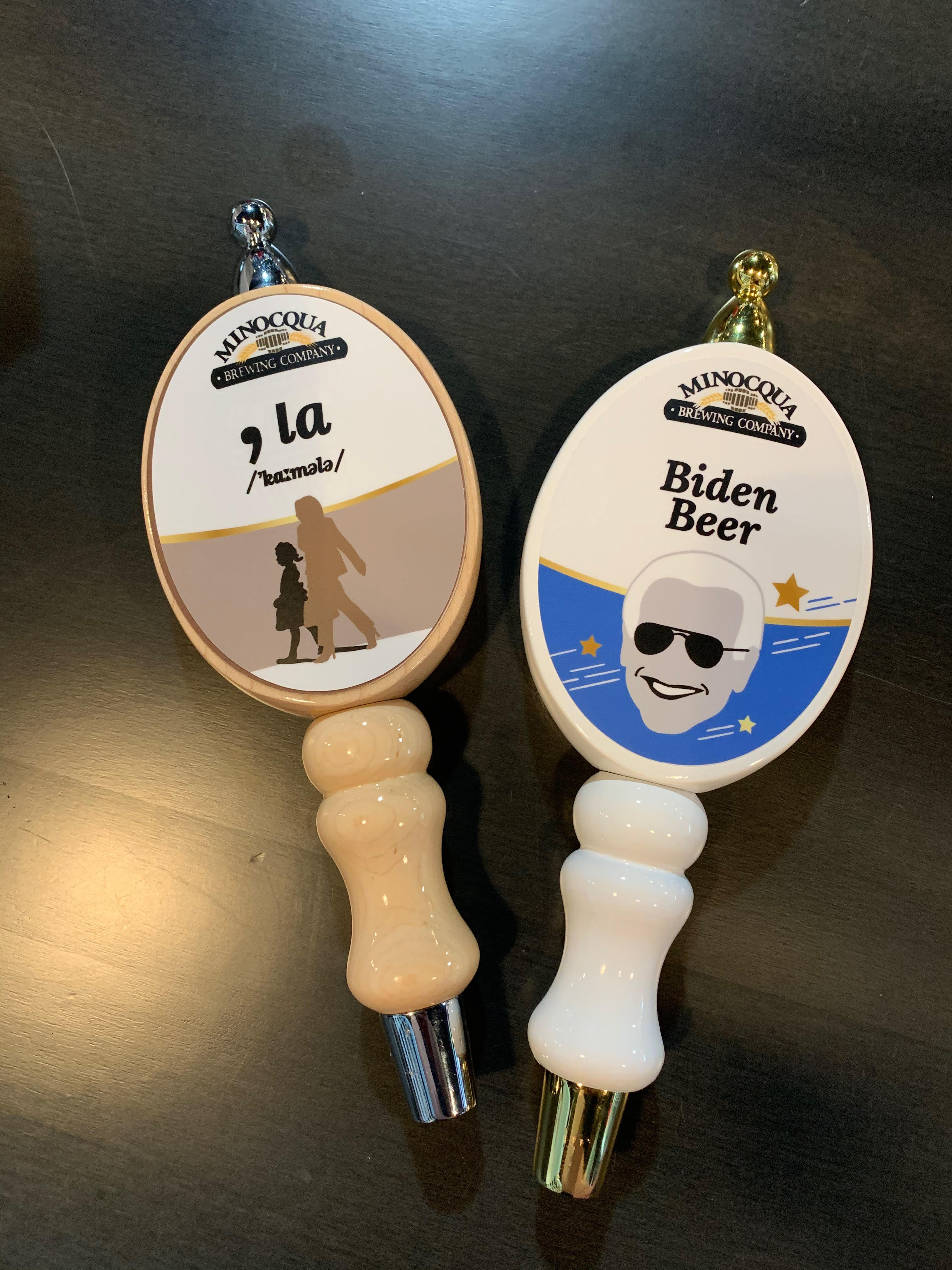 Since the election last November, Bangstad has been crafting and selling politically-themed beer with progressive subtleties in a region that has been voting Republican for decades.

Since the pandemic hit, Bangstad said he took coronavirus precautions seriously and only allowed patrons to dine and drink outside, which only lasted for the short summer season from the end of May through early September. Like countless other businesses in the food and beverage industry, the Minocqua Brewing Company had to close its doors because of lost revenue to the pandemic.

“I told my employees that if we don’t get another round of stimulus payments, we’re going to have to shut down,” Bangstad told Native News Online. “It’s hard enough for us to get by in the winter time and with Covid-19 on the rise, we had no choice but to shut down.”

Since the Health and Economic Recovery Omnibus Emergency Solutions Act (HEROES) Act passed in the House of Representatives on May 15, 2020, Bangstad was hoping for additional assistance for small and independently-owned restaurants, but the bill was swiftly opposed by the Republican-majority Senate.

“Mitch McConnell tried to play political football to try to get Trump reelected, and didn’t budge to the Democrats asking for the additional stimulus,” said Bangstad. “So it never happened.”

The HEROES Act 2.0 was introduced in late September 2020, which was lauded as a smaller version of the original $3 trillion HEROES Act, and blocked by Republicans due to the cost. It wasn’t until late December that the Bipartisan-Bicameral Omnibus COVID Relief Deal passed Congress and Trump signed the legislation into law.

The political fluctuation frustrated Bangstad, as he had employees to support and a business to keep afloat.

“In September, I was pissed because I had to lay off an entire staff,” said Bangstad. “I had to close down just so I didn’t go ‘belly-up.’”

“Our former president never dealt with the coronavirus at a national level by encouraging people not to wear masks and continuously saying the pandemic wasn't a big deal,” added Bangstad. “And half of America thought it was a hoax and the relief for businesses struggling to stay afloat wasn’t taken care of.”

Looking for a way to ease his frustration, Bangstad hung a larger-than-allowed Biden-Harris sign on his storefront, causing a stir among the conservative communities in northern Wisconsin. Bangstad, 43, is a Harvard-educated former professional opera singer, who moved to Wisconsin six years ago from Manhattan, where he was a technology consultant and served as the policy director for another political candidate in 2013.

After Biden won the election, Bangstad produced and released a new product: Biden Beer. “Let’s just brew a beer and call it ‘Biden Beer,”” he said. He announced Biden Beer in a post on Facebook that read:

“It's inoffensive, especially to women.

It's best served while taking the temperature down.

Guaranteed not to overstay its welcome in your fridge.

How do you spell RELIEF? Biden Beer.”

Bangstad wasn’t expecting the fanfare reaction that came with the idea. “People loved it and were coming up from Madison and Milwaukee just to buy growlers of Biden Beer,” he said. Biden Beer sold out within days and he thought the new idea might be a way to resurrect the Minocqua Brewing Company.

“All of a sudden I’m making money selling beer that has a political message,” Bangstad said.

Eager to continue the success he had with Biden Beer, he brewed a new batch on Inauguration Day with the message of “a peaceful transition of flavor” and called it Inauguration Day Beer. His second batch sold out before it was available for purchase. Not long after, he created an imperial stout after Kamala Harris, appropriately named Vice Presidential Stout, which also sold out before it was finished. 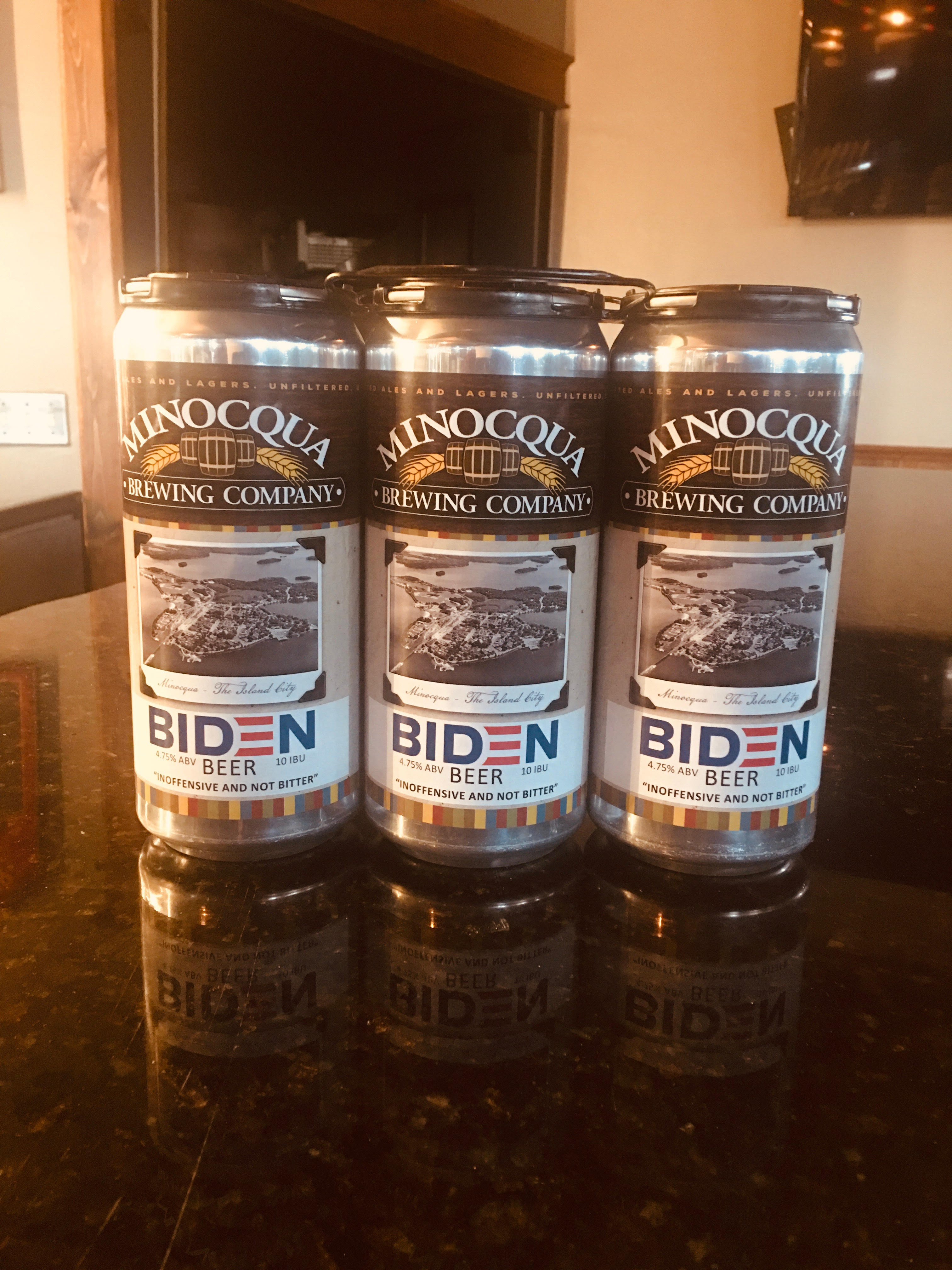 With increasing demand for his progressive beer, Bangstad thought he would continue to brew and package his product in cans, selling to retailers in Madison and Milwaukee, Wis., where there are more democratic voters, and who would be willing to sell the Minocqua Brewing Company’s unique product. When local consumers learned of his distribution in Madison and Milwaukee, they took to social media asking why the products weren’t available locally.

Bangstad was in the middle of responding to local demand and packaging products for distribution when he was contacted by a local buyer, informing him that owners throughout northern Wisconsin are no longer selling products from the Minocqua Brewing Company.

As to why local business owners refuse to sell Minocqua Brewing Company’s beer, “it’s because I’m progressive,” Bangstad said. “The ‘old boys network’ in northern Wisconsin is against me.” Bangstad took the issue to social media, announcing an opportunity to not only sell the company’s products, but to have exclusive rights to the popular beer.

The Lac du Flambeau Country Market responded to Bangstad's call for a local retailer the next day.

“Our team noticed the post the morning the Minocqua Brewing Company shared they were looking for help to sell their beer,” said LDF Country Market Marketing and Public Relations Coordinator Zach Allen to Native News Online. “We discussed amongst our team that it would be a good opportunity to help out a local business that has dealt with some of the same issues that we have dealt with, in regards to discrimination and hate from some in northern Wisconsin.”

In the late 1980s, Minocqua was a hotbed of hate and discrimination when Lac du Flambeau tribal members began practicing their treaty rights of spearfishing walleye in ceded territory, which encompasses the northern half of Wisconsin. Violent scenes occurred at boat landings where thousands of white protesters showed up shouting racial slurs, throwing things at tribal members, and even assaulted them. The lure was a beer called “Treaty Beer,” and was produced and distributed to protestors at boat landings.

“Since the announcement of our partnership, we have received nothing but positive feedback and support, and we hope this is a step in the right direction of breaking down barriers between our surrounding communities,” said Allen, who is also a Lac du Flambeau tribal member.

The LDF Country Market now has exclusive rights to the Minocqua Brewing Company’s products for the next four months, making the Lac du Flambeau Indian Reservation the only place in northern Wisconsin where shoppers can get their hands on the brewery’s progressive beer. But people in southern parts of the state can also buy the popular beverage in Madison and Milwaukee, according to Bangstad.

“It’s a perfect partnership,” said Bangstad. “The tribe has been oppressed by the same people I’m being screwed by and together we’re addressing the same issues, building community, and finding solutions to get through this pandemic.”

“We don’t see it as a political thing because the election is over,” LDF Business Development IT Director Dion Reynolds said in an interview with Native News Online. Reynolds is an enrolled member of the Rosebud Sioux Tribe from South Dakota and learned very quickly of the tension in northern Wisconsin between Native and non-Native people, which, in his mind, relates directly to treaty rights.