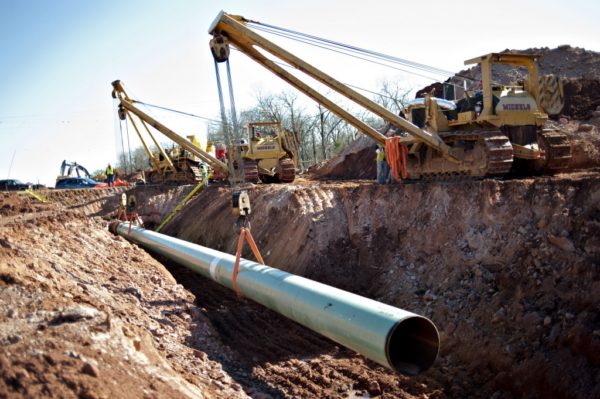 CALGARY, Alberta and HOUSTON — The Canadian energy firm behind the controversial Keystone XL oil pipeline announced today that it will move forward with the long-delayed project, even as environmental groups and tribal nations continue to fight its construction amid the COVID-19 pandemic.

Calgary-based TC Energy, formerly called TransCanada, said the $8 billion project will “put thousands of people to work” as the company builds the 1,210-mile pipeline. Once completed, it would deliver 830,000 barrels of crude oil every day from the so-called “tar sands” of Alberta to the United States. Pre-construction activities are underway, and the pipeline is expected to enter service in 2023.

"To push through this disastrous project during a time of an international pandemic is not only foolhardy, but shows unabashedly the total disregard TC Energy has for its own workers, the residents of Montana, South Dakota, and Nebraska,” Joye Braun, community organizer for the Indigenous Environmental Network, told Native News Online this evening.

“This is a shameful new low,” Catherine Collentine, associate director of the Sierra Club’s Beyond Dirty Fuels campaign, said in a statement. “By barreling forward with construction during a global pandemic, TC Energy is putting already vulnerable communities at even greater risk."

Earlier this month, the Sierra Club and other conservation, environmental and landowner groups argued in federal court in Montana that the U.S. Army Corps of Engineers failed to evaluate the project’s impacts when they issued a permit authorizing the pipeline’s route through hundreds of rivers, streams and wetlands.

As well, tribal nations continue to fight the pipeline. On March 17, the Native American Rights Fund filed a temporary restraining order on behalf of two tribes to halt construction of the pipeline. Adding a sense of urgency, the TRO raises new public health concerns tied to the Coronavirus and TC Energy’s plans to build “man camps” where workers would reside.

“Additionally, in light of the outbreak of SARS-CoV-2 and COVID-19, the transient nature of the construction workers constructing and living in these man-camps pose serious and immediate public health and safety threats to the Tribes,” the filing notes.

Other critics have called out TC Energy for its plan to send hundreds of workers into rural communities across Montana, South Dakota and Nebraska. Bold Nebraska, a group that works with Tribal Nations and other citizens, said TC Energy plans to build a half-dozen “man camps” — temporary housing where hundreds of pipeline workers would live together in close quarters as the pipeline is built.

“Rural hospitals and Indian Health Service facilities along the proposed route are already ill-equipped to deal with the Coronavirus public health threat, and must not be exposed to this additional strain and threats from the influx of hundreds or thousands of out-of-state workers that would accompany the launch of an unnecessary construction project like the Keystone XL pipeline,” according to a Bold Nebraska news release.

“This causes eerie memories for us with the infected smallpox blankets that were distributed to tribes intentionally in the 1800’s,” Faith Spotted Eagle, Brave Heart Society and Yankton Sioux Tribe said in a statement. “It is absolutely similar, whereby we lost thousands of people in our tribes along the Missouri River where treaty water theft is occurring now.

“We, as Indigenous people, populated these areas and continue to live in these towns, although we are constantly ignored by South Dakota state legislators. Now their towns will be endangered. We demand that TC Energy withdraw all construction which endangers our tribal health and neighbors personally and systemwide by bringing outsiders in from unions and who knows where. Do not dehumanize us with continued pipeline construction or mancamps or RVs. Stop now!”