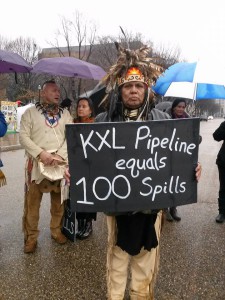 GREAT FALLS, Mont. — A federal judge ruled on Wednesday to revoke a key construction permit for the Keystone XL pipeline, halting construction of the controversial project.

In the ruling, Federal Judge Brian Morris determined that the U.S. Army Corps of Engineers made a mistake by issuing the water-crossing permit, saying the Corps did not comply with environmental requirements.

The judge ruled on a lawsuit filed by conservation and land owners groups in 2019.

The ruling states that the US Army Corps of Engineers (Corps) violated the law by granting the permit, and that the Corps must begin formal consultations under guidelines of the Endangered Species Act, causing major delays for construction. This decision has implications for pipeline projects around the country.

The judge said the Corps did not adequately consider effects on endangered species such as pallid sturgeon, a massive, dinosaur-like fish that lives in rivers the pipeline would cross.

American Indian tribes and organizations have opposed the Keystone XL pipeline since it was introduced.

“We wish to recognize the tremendous work by our allies! This decision vindicates what we have always known. We stand unified in this resistance, not only on the grounds of morality, but on the terms of our legal rights as well. We can only hope that our organization’s ongoing litigation will receive a comparable decision as well. In the meantime, we fight on in defense of the sacredness of Mother Earth!” Dallas Goldtooth, Keep it in the Ground Campaign Organizer, Indigenous Environmental Network said.

“For years, our tribes’ concerns that the Army Corps’ nationwide permit process was arbitrarily contrived with no clear path for consultations or legality have been ignored. They wrongfully dismissed our constant objections. Today, thankfully, we were heard as the water crossings spoke loud and clear against the Keystone XL pipeline. Justice has prevailed at a strange sacred time on Turtle Island,” Spotted Eagle commented.

“This is a victory for more than just Indigenous people and those who have opposed this pipeline since the beginning. This is a victory for the Earth and all humanity as we begin to see more widespread shifts in consciousness from extractive economies and fossil fuel dependency, to a return to more sustainable ways of living. The time for transitioning from fossil fuels is now, and this victory is indicative of that shift,” Nick Tilsen, NDN Collective President and CEO said.

TC Energy, the Canadian company that owns the pipeline, said in a statement that the company is reviewing the judge’s ruling.