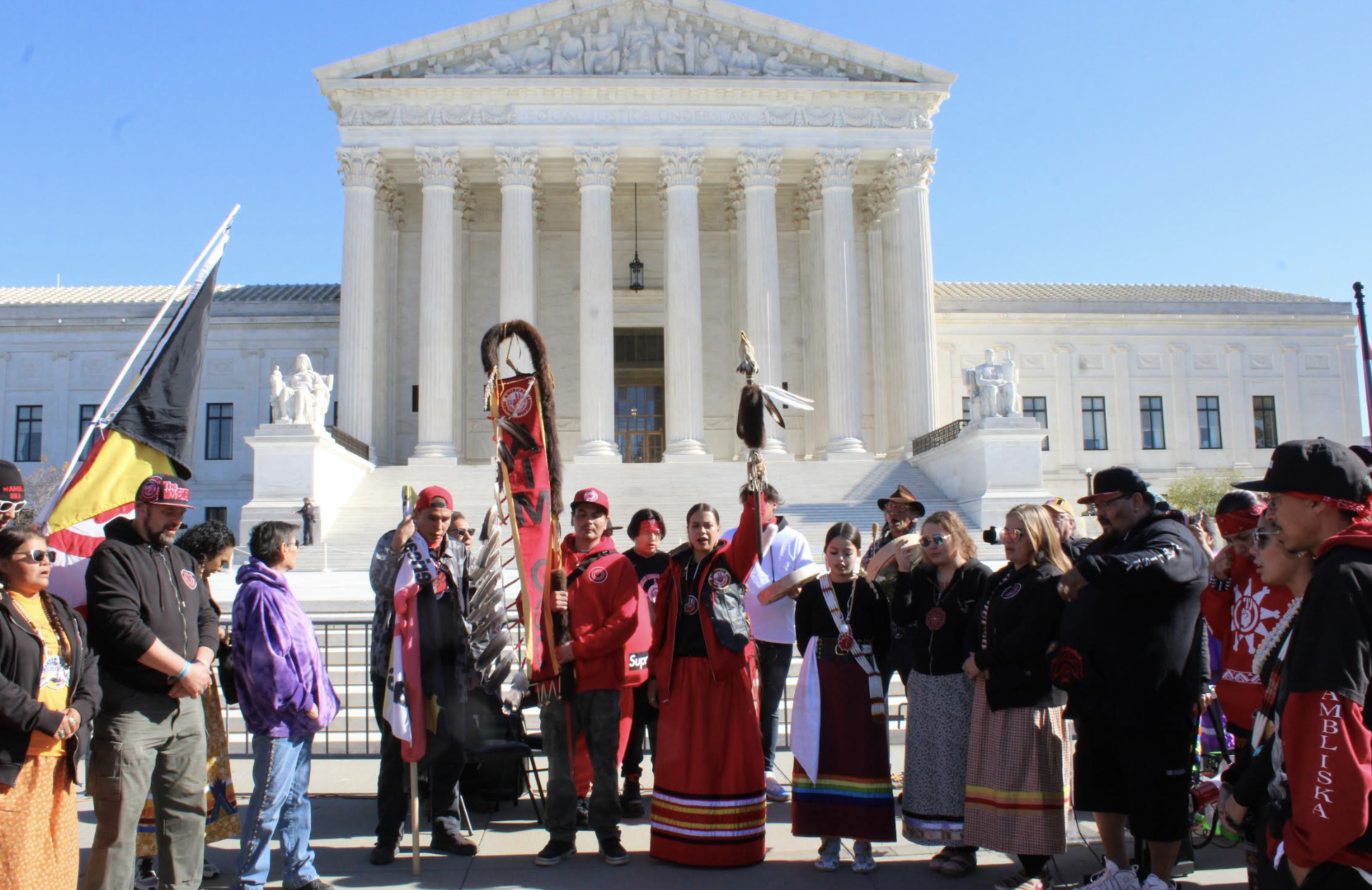 WASHINGTON — In a case that tribal leaders across Indian Country view as the most significant threat to tribal sovereignty in modern times, the Supreme Court of the United States heard oral arguments for Haaland v. Brackeen. The highly contested case out of Texas challenges the constitutionality of the Indian Child Welfare Act (ICWA).

Congress passed ICWA in 1978 after a national effort to address the widespread practice of removing American Indian children—members of federally recognized tribes—from their homes and placing them with non-Native, white families.

Under a brilliant blue sky outside the U.S. Supreme Court, the highest court in the nation, four tribal nations, and their legal teams presented a united front after Wednesday’s hearing, including the Cherokee Nation of Oklahoma, the Oneida Nation of Wisconsin, the Morongo Band of Mission Indians, and the Quinault Indian Nation.

“Taking Native children from their families and tribal lands has done immeasurable damage to Native people in this country for centuries,” Cherokee Nation Principal Chief Chuck Hoskin Jr. said after Wednesday’s hearing at the Supreme Court of the United States. “We were here today, collectively, as Native peoples to make our case in court that the Indian Child Welfare Act is constitutional.”

ICWA requires caseworkers in each state foster care system to make “active efforts” to keep Native children with their biological family or within their respective tribe—if they are enrolled or acknowledged by a tribe. If a child in question cannot be placed within the family, caseworkers must give preference to placing recognized Native children in other homes identified as Native American or American Indian.

Opponents of ICWA argue that the law discriminates on the basis of race and prioritizes the interest of tribes over the needs of the Native children it is supposed to protect. The challenge of ICWA has been brought by the state of Texas and three non-Native couples that have sought to adopt or foster three Native children, with one couple being supported by the mother of a child that was adopted.

The tribal nations and the U.S. Department of the Interior argued that the law is constitutional and that it is not race-based and instead argued that American Indian tribes and their citizens are a political class.

“Today, the justices [of the Supreme Court] heard clear arguments of ICWA’s constitutionality,” said Oneida Nation of Wisconsin Chairman Tehassi Hill after Wednesday’s hearing. “The facts on ICWA’s consistency with congressional authority and its broad bi-partisan support are overwhelming. ICWA helps our most vulnerable families who find themselves in state and foster care proceedings.”

Supreme Court justices heard more than three hours of oral arguments of one of the most contested federal Indian laws in modern times. Nearly 500 federally recognized tribes filed amicus briefs, as well as the federal government and many organizations, including state bar associations, have asked the Supreme Court to uphold ICWA.

Leaders and legal experts argue that Haaland v. Brackeen impacts more than Native children and families. They argue that it is an attack on tribal sovereignty.

“The lack of much discussion about the argument that ICWA creates an impermissible racial classification suggests that the court is not ready to strike down the entire structure of the unique relationship between the federal government and Native American tribes,” said Ben Kappelman, partner at Dorsey & Whitney, in an email to Native News Online.

As the oral arguments were taking place inside the Supreme Court, on the outside, a rally was organized by several organizations, including the National Indian Child Welfare Association, the National Congress of American Indians, and others. Speakers representing many different tribes, organizations, and families spoke in support of ICWA and that it is vital to the future of tribal identity.

“After spending three hours in the highest court of this land—the Supreme Court—and sit here and still feel that they still do not get us,” National Congress of American Indians President Fawn Sharp, who also is the Quinault Indian Nation vice president, said. “Three hours of agonizing arguments and they do not understand the basic concept that we have inherent sovereignty and rights to the future of every single Native child born into this generation.”

“They somehow believe the interests of one or two people should trump generations of our efforts to repatriate and restore our lands and our people,” Sharp said.

The Supreme Court will make a decision in the Spring of 2023 and where it is leaning is unclear.

As the hearing concluded, tribal leaders and their legal teams approached the footsteps of the Supreme Court with smiles and an aura of optimism. Last term, the Supreme Court ruled 6-3 in Castro-Huerta to limit tribal sovereignty by permitting states to prosecute non-Indians who commit crimes on tribal lands against Indians.

“Tribes looking for five justices leaning towards upholding ICWA will be disappointed,” said legal expert Ben Kappelman. “The questions from four justices, including Justice Gorsuch, suggest they would uphold the law—which of the others might join them as a fifth vote is unclear.”

“Tribes will be on edge about the potentially sweeping implications of this case until it is decided,” Kappelman said.