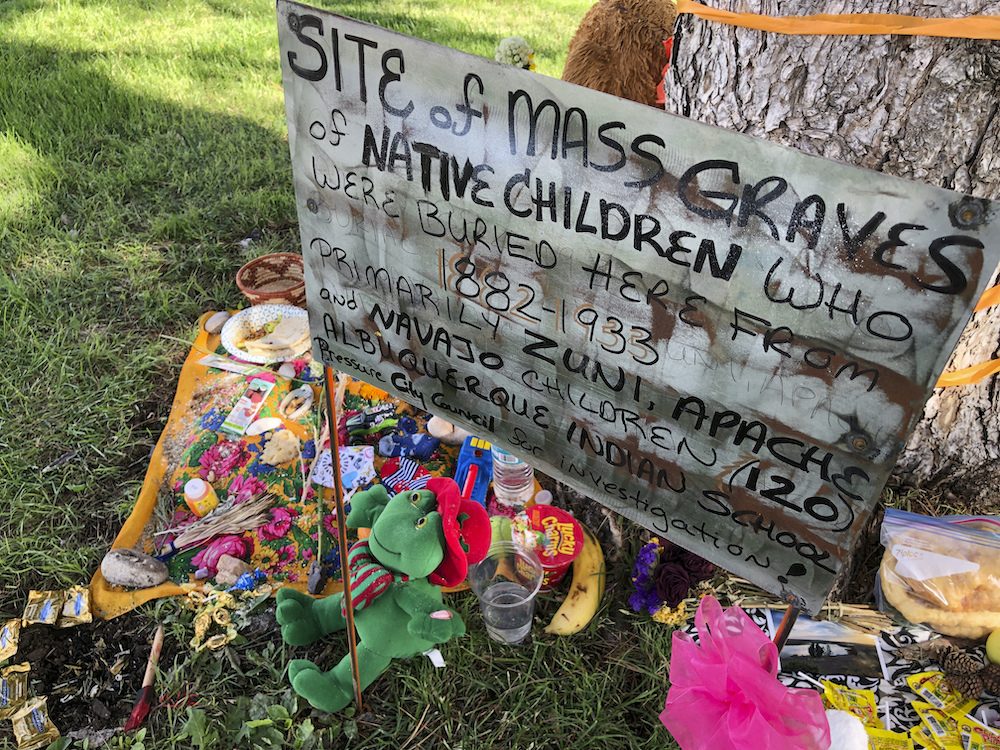 ALBUQUERQUE—The city of Albuquerque will become the first US city to use ground-penetrating radar to search for remains of Native American children buried in unmarked gravesites over a century ago.

Mayor Tim Kellen announced the plan over the weekend at a public acknowledgement ceremony near the site of the former Albuquerque Indian School Cemetery, now a public park.  The City of Albuquerque’s Parks and Recreation Department and University of New Mexico are working with an archaeologist to use non-invasive ground penetrating radar (GPR) in order to investigate the remains at the former Indian School site, Kellen said.

Researchers used GPR to find unmarked graves and the remains of 215 children at the Kamloops Residential School earlier this year. The discovery brought international attention to Indian Boarding Schools and put a spotlight on a dark era of forced government assimilation of Indigenous children.

An unknown number of children died of sickness and disease at the school, and those from far-away reservations—such as the Zuni Pueblo and Hopi from Arizona, the Mescalero and Ute from Colorado, and the Pima  from Arizona—were buried at the cemetery three blocks away.

Under county ownership in the 1960s, the cemetery was transformed into a park, and was transferred to the city a decade later. During the development of an irrigation system at the park in the ‘70s, the city uncovered human remains, but it wasn’t for another two decades until officials installed a plaque at the 4-H Park, as it is now called, denoting the Native American gravesites. In 2019, that plaque mysteriously disappeared.

“The plaque going missing was a catalyst to awaken the city to this site, and push us to do more to honor those who are laid to rest,” said Dawn Begay (Dine), Native American Affairs Coordinator for  the City of Albuquerque. She said that while she was sad to hear that the plaque had gone missing, she was more shocked to learn that the county had built a park over a cemetary.

“To me this represented disrespect and erasure of Native peoples,” Begay said. “As a descendant of boarding school survivors, a member of this community, and also as a city employee, I felt it was my responsibility to learn more about the history of this site and to face the truth no matter how painful.”

Begay worked with the city’s Commission on American Indian and Alaska Native Affairs (CAIANA), tribal leaders and historic experts to come up with research and solutions for 4-H Park.

“We are here today to show respect to a sacred site,” Mayor Kellen said in a public acknowledgement of Albuquerque Indian Boarding School live streamed on Sept 25. “I want to acknowledge intergenerational trauma that persists from centuries of oppression and erasure, and to express our deepest apologies, on behalf of the City of Albuquerque for the grievous actions over the past decades.”

The mayor’s statement and momentum towards uncovering truths at 4-H Park were inspired by recommendations made by CAIANA on Sept. 20.

In addition to formal acknowledgement, the commission recommended the city conduct a comprehensive assessment of the Albuquerque Indian School Cemetery Site at 4-H Park, and other related burial sites. There are an additional 73 unmarked graves located at the Fairview Cemetery 10 minutes south of 4-H Park, the commission found.

“The first step is to understand what's there,” Mayor Kellen said of the gravesite on Saturday. “The Parks and Rec team and UNM (University of New Mexico), they are working with an archaeologist (to) perform non-invasive ground penetrating radar, so that we can understand how big the remains are, and how deep they go, and so forth.”

The city will abide by protocol laid out by President Jonathon Nez of the Navajo Nation, as well as recommendations from the Governor of Laguna Pueblo.

Tribal consultation with each specific impacted tribe will dictate what happens with each set of remains, Kellen said.

“None of this ends with an apology, but an apology is a necessary step for reconciliation, something that we must begin and continue,” he said.

The city will host its second stakeholder meeting Oct. 8 to gather input and recommendations for a plan moving forward with the cemetery. To provide input, pre-register here. Following the consultation, the city will begin implementing its recommendations. Until then, orange flags representing the color of the Indian Boarding School movement will serve as a temporary demarcation of the cemetery within the park. The Parks and Recreation Department also established special protocols for maintaining the section of the park containing gravesites, including conducting most maintenance activities by hand.

“I say celebrate because we are getting our day and reckoning, and acknowledgement of the truth, healing and reconciliation that we, our ancestors, and our future children deserve.”