Prayer, Justice, and Remembrance: Diné Woman Reclaims the Past As She Walks to Bring Her Missing Aunt Home 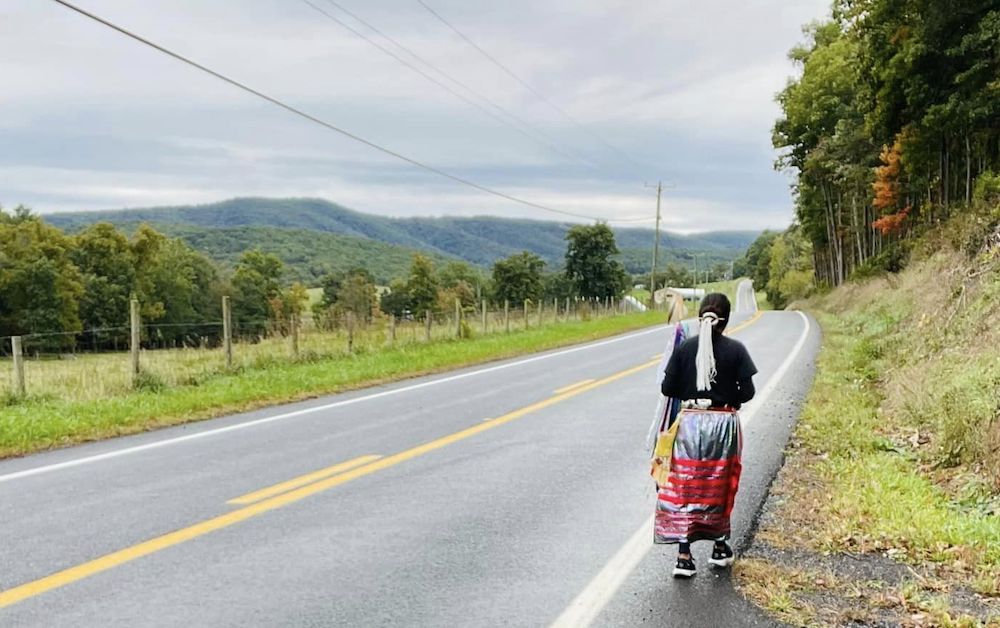 In June 2022, a year after her auntie went missing, Seraphine Warren readied herself to take the first steps on a 2,400-mile walk from Arizona to Washington, D.C.

It was 2:30 in the morning — the same time her aunt Ella Mae Begay had disappeared a year earlier. Warren, a 41-year-old Diné mother and ironworker, had packed a bag and told her boss she wasn’t coming back until her aunt was found. She carried with her photos of her aunt, a ribbon skirt and one of Begay’s weaved rugs with her.

“My aunt, she was very talented,” Warren said. “All my aunties, they have a skill that they mastered. They are weavers.”

As she stepped away from the front door of her aunt’s Sweetwater, Ariz. house in the pre-dawn darkness, Warren was determined to raise awareness of her missing aunt Ella Mae and so many other missing and murdered Indigenous people.

Her walk, like so many that Native Americans have taken over the years, had purpose.

Before this long journey, Warren had already walked three times to Window Rock, Ariz., the capital of the Navajo Nation, to speak with President Jonathan Nez, urging him to help her find Begay.

“Our president has done nothing yet,” Warren said. “There are a lot of families that have talked to him.” 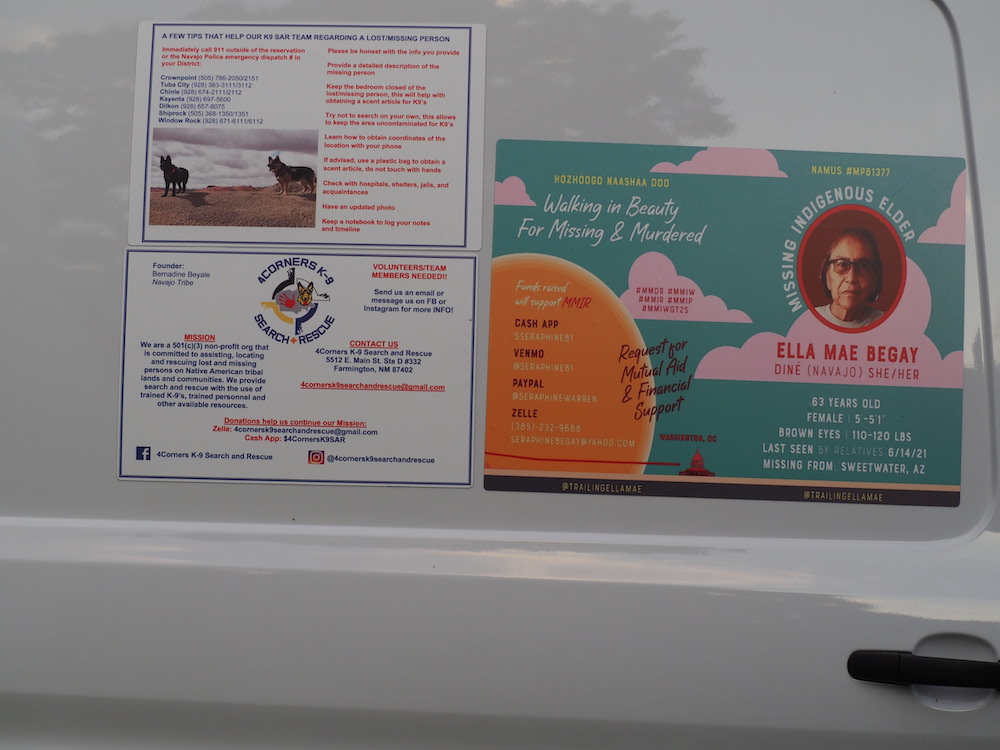 PICTURED: Ella Mae Begay is one of nearly 200 Native Americans verified as missing in Navajo Nation. Warren, who holds a degree in criminal justice, says someone goes missing or murdered in her community every day. (Photo: Britny Cordera for Native News Online)

According to FBI.gov, there were 183 Native Americans verified as missing in Navajo Nation as of Sept. 13, 2022. Warren, who holds a degree in criminal justice, says someone goes missing or murdered in her community every day. She points to infrastructure, border jurisdiction, lack of police training to handle missing people’s cases, and government leaders for not responding in time. Additionally, Navajo Nation does not have a search and rescue team.

“None of this is normal,” Warren said. “We don’t have addresses. We have to describe what the house looks like, where to turn. Officers can find us, but it takes them hours, if not days, to get to us.”

According to the National Congress of American Indians, tribal law enforcement has a very complicated jurisdictional net, operates with limited resources, and patrols some of the most desolate territories, often without assistance from partner law enforcement agencies.

After leaving Sweetwater, Warren walked four days to the Navajo Nation capital, her first stop, to speak with Nez one more time, trying to show him the importance of maintaining tradition.

“In our tradition and our beliefs, we are supposed to be buried in four days,” said Warren.

According to Tsosie, some families in the community go 20 or 35 years before being updated about their missing relatives.

The walk to bring Begay home grew into a ceremony in which Warren carries the prayers of her people and an awareness of the lack of response from authorities all over Indian Country.

Warren has reached her goal to walk D.C. Now, she wants to speak directly with Department of the Interior Secretary Deb Haaland and get help. She says she has a meeting with Haaland on Oct. 11. The Interior Department did not confirm or deny the meeting to Native News Online.

Warren says she struggles to understand why the FBI doesn’t keep in touch with her family.

“My aunt could still be out there, in the cold, alone, but they haven’t updated us,” Warren said. “It doesn’t feel like anyone’s out there looking for her.” 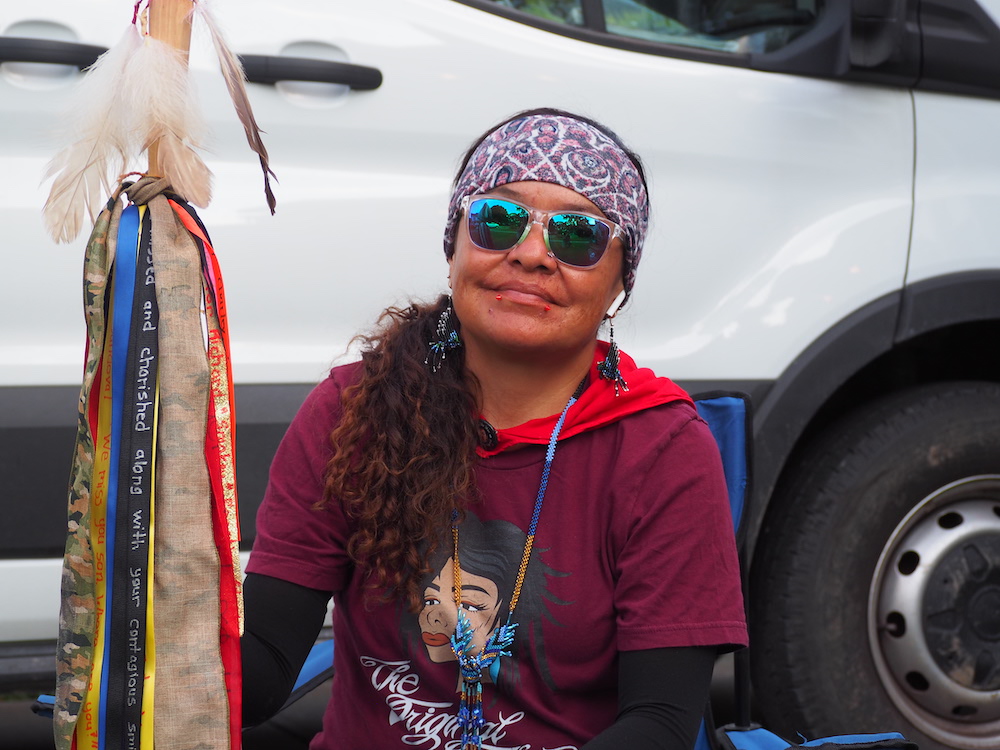 PICTURED: Warren says she struggles to understand why the FBI doesn’t keep in touch with her family. “My aunt could still be out there, in the cold, alone, but they haven’t updated us,” Warren said. “It doesn’t feel like anyone’s out there looking for her.” (Photo: Britny Cordera for Native News Online)

Warren doesn’t walk alone. She belongs to a history of Native American prayer, remembrance, and justice marches that have happened all over the U.S. since 1978.

Bearing the name of Diné forced removal that occurred between 1863 and 1866, the tradition of “The Longest Walk” was resurrected five years after The Wounded Knee Occupation to protest threats to tribal lands and water.

The first Longest Walk totaled 3000 miles from Alcatraz Island in San Francisco to Washington D.C. Since then, there have been four Longest Walks. The most recent —  Longest Walk 5 (LW5) — started at the Leech Lake Reservation in Minnesota in May 2022 to bring to light issues of domestic violence and drug abuse.

In 2021, treaty defenders and water protectors walked twice –– first 235 miles from Bakus, Minn., to the Minnesota State Capitol; and again 160 miles from Bakus to Wisconsin Point to protest against Governor Tim Walz’s approval to permit Line 3 to run through treaty territory.

Rachel Thunder, director for the American Indian Movement (AIM) True People of Indiana and Kentucky Chapter, is one of the lead organizers for the Walk to Justice for the freedom of Leonard Peltier.

They started walking to Washington D.C. on Sept. 1 to pressure President Biden to grant executive clemency to Peltier. So far, Thunder and volunteers with AIM have trekked more than 1,000 miles in the last month.

Peltier has been in prison for 46 years, convicted of killing two FBI agents on the Pine Ridge Indian Reservation in South Dakota. His trial has been called a  sham that included falsified testimony from witnesses and prosecutors withholding evidence that could have assisted Peltier’s defense.

“He’s 78 years old, and he has type two diabetes,” Thunder said. “He has an abdominal aortic aneurysm that’s fatal if it ruptures. He had a stroke that took 80 percent of vision and one of his eyes.”

For Thunder, Peltier’s family, and many in the Native American community, 46 years has been too long.

“It’s past time,” Thunder said. “He should have never been in there, to begin with. We were reading some of the documents from the original case, and one official was quoted saying, ‘any Indian will do.’”

Walks of prayer, justice and remembrance are not just creating political movement — these treks are also an act of reclaiming miles from forced removal.

“In our traditional belief, time is not linear,” Thunder said, “The walks that happened in the past balance the ones happening right now in the stories of resistance of our people.”

Even in the face of aching feet, the intense heat, or the ever-unpredictable weather caused by climate change, Warren remains steadfast in her mission. She expressed a similar sentiment to Thunder.

“I can hear my auntie and our missing relatives walking with me sometimes,” Warren said. “They kept me strong, my hopes high.”

On Warren’s Facebook Page, Trailing Ellamae, she’s garnered 21,000 followers. She posts daily video updates. Some mornings she sobs due to disrespectful comments on her social media, but most days, she is full of energy and zeal.

Often, Warren stays up all night worried about her aunt. But the support from Tsosie and her followers helps lift her spirits.

“I tell Sera every day that she’s my lady hero,” Tsosie said, “I talk with her every day, encourage her.”

Warren carries her and her people’s prayers and hopes on ribbons tied to a wooden staff resembling a corn stalk. On top of the staff are two eagle feathers.

“Corn is sacred to us,” Warren said. “The staff is divided into four sections representing the four worlds.”

The hopes she carries are not just for the return of loved ones but also for policies that lift tribal jurisdictional barriers after someone is reported missing and to instill trained police on tribal land who know how to handle missing and murdered indigenous people (MMIP). 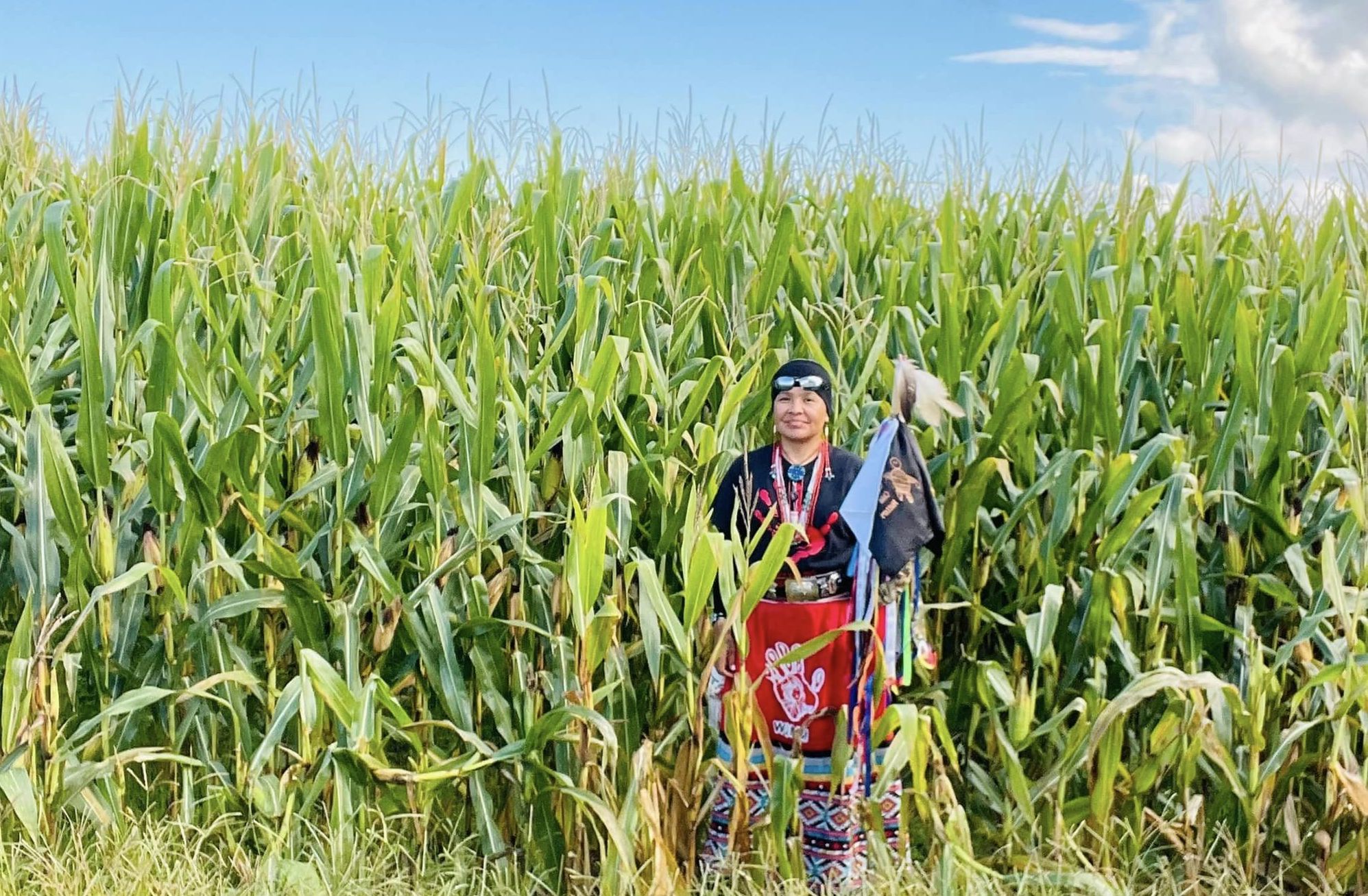 PICTURED: Warren carries her people’s prayers and hopes on ribbons tied to a wooden staff resembling a corn stalk. “Corn is sacred to us,” she said. (Photo: Courtesy of Seraphine Warren)

In April 2021, Secretary Haaland created a new Missing and Murdered Unit (MMU) to provide leadership and direction for cross-departmental and interagency work involving missing and murdered American Indians and Alaska Natives. Since the launch of this program, the Department of Interior (DOI) has built out personnel and increased infrastructure capacity to address MMIP cases.

Today, 17 Bureau of Indian Affairs offices throughout the nation have at least one agent dedicated to solving missing and murdered cases for American Indians and Alaskan Natives, according to the DOI.

The BIA also launched a new website dedicated to solving missing and murdered cases in Indian Country. This site houses case profiles that can be easily shared via social media and other digital media, raising the visibility of victims.

For Thunder, solutions take the form of Native people voting at the polls. With each step taken, she reminds her community that Native votes matter.

“The Democratic National Committee recently added Peltier’s clemency to the Democratic platform,” Thunder said. “When we show out, we are heard.”

‘I’m going to finish it’

When I caught up with Warren near Lexington, Ky., in September, summer was already changing into autumn. She was taking a short break.

She tells me that she has trekked through thunderstorms with sand, mud, and rocks in her shoes, watched the sunset and rise each day, and greeted horses and butterflies.

“I’ve seen a lot of trees and bushes I don’t recognize and ponds everywhere,” Warren said.

I asked Warren how I could help, and she asked if I would walk in ceremony with her.

The following weekend, I walked seven miles at Sleeping Bear Dunes wearing a blue skirt. I prayed for Ellamae Begay and all MMIP. There were moments my feet ached, or I thought I would never catch my breath. I felt like giving up.

But Warren’s words rang in me: “As long as we find my auntie, everything is going to be OK. I can slow down, I can wait for justice, but until then, I have a mission, and I’m going to finish it.”

Editor's Note: This story has been updated to correct the total number of miles walked by Ms. Warren and to include additional information about the purpose of the Interior Department's Missing and Murdered Unit (MMU).

Seraphine Warren (Dine) shares a message with her family in her Native language. (Video: Britny Cordera)