Walk to Freedom for Leonard Peltier Halfway to Washington 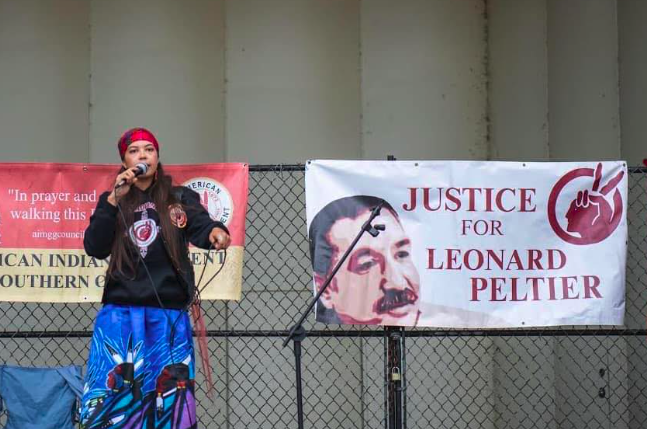 Volunteers demanding the freedom of Leonard Peltier have trekked 500 miles over the last four weeks in a protest walk organized by the American Indian Movement (AIM) Grand Governing Council.

Peltier (Turtle Mountain Band of Chippewa Indians), 78, was convicted of aiding and abetting in the murder of two Federal Bureau of Investigation agents on the Pine Ridge Indian Reservation on June 26, 1975. He has spent the last 46 years in federal prison.

AIM hopes the walk will raise awareness for Peltier’s plight and apply some pressure on President Joe Biden to grant executive clemency to Peltier.

“The walk and prayer for Elder Peltier has been heartfelt, heavy and healing,” Walk to Justice organizer Rachel Thunder told Native News Online. “Our walkers are out every day at 5 a.m. to make sure the 20-plus miles are covered to get this message to Washington D.C., to free Leonard Peltier.”

Leonard Peltier’s Walk to Justice started on Sept. 1 in Minneapolis — the birthplace of the American Indian Movement — and will finish in Washington, D.C. on Nov. 14. It has since been through Wisconsin, northeastern Illinois, and is currently in northern Indiana. The walkers will travel a total distance of 1,100 miles.

“As AIM, we are asking for justice,” Thunder said. “Justice for Leonard Peltier and justice for our people as the original people of Turtle Island.”

Since 1993, many, including former U.S. Attorney James Reynolds—Peltier’s former prosecutor—have urged executive clemency for Peltier. Former U.S. Attorney General Ramsey Clark said of Leonard Peltier, “he should have never been in there in the first place—never.”

“While Leonard Peltier is in prison, we all are,” Clark said in a statement in 1997.

Peltier has admitted to having been present during the incident that left FBI agents Jack Coler and Ronald Williams dead, but has always denied killing the agents as alleged by prosecutors at his trial. His co-defendants Dino Butler and Robert Robideau were charged with two counts of murder and were acquitted under claims of self-defense.

Peltier was arrested in Canada in 1976. He was eventually extradited on a false statement made by Myrtle Poor Bear, who later admitted she had been coerced by the FBI. Additionally, she later revealed that she was not present on the reservation during the fatal shootings. Poor Bear was not a witness at trial.

Since 1993, many jurists have urged for executive clemency.

Former Attorney General Clark said of Peltier in 1997, “He should have never been in there in the first place—never ... while Leonard Peltier is in prison, we all are.”

‘Time for people to wake up’

The walk has also created visibility for Peltier’s plight and gained momentum with rallies along the Walk to Justice route in the Wisconsin cities of Eau Claire and Madison, as well as Chicago.

“We are thankful for all of the support coming in from around the world,” Thunder said. “It’s time for the people to wake up. Leonard Peltier’s injustice is an injustice against all human beings. This is a human rights issue, not just a native issue.”

A rally is scheduled in South Bend, Ind., on Saturday, Oct. 1, at South East Park at 5:00 p.m. local time. Two drum groups, Red Buffalo and Shki Bimaadzi, will be present for the rally. All are invited to participate.