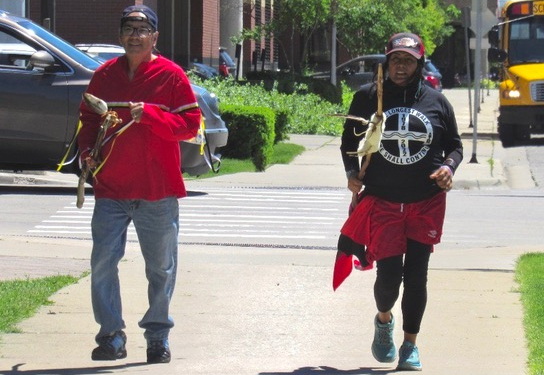 The travelers are part of the Longest Walk 5 Spirit Walk (LW5) to call attention to and seek guidance on issues that are causing devastation in Indian communities and communities across the nation. The walk consists of about 10 walkers, with others joining them throughout the miles as they visit tribal communities along the route to Washington, D.C.

This year’s LW5 was organized by Darla Banks, daughter of the late American Indian Movement (AIM) co-founder Dennis Banks, who established the first Longest Walks in the late 1970s. 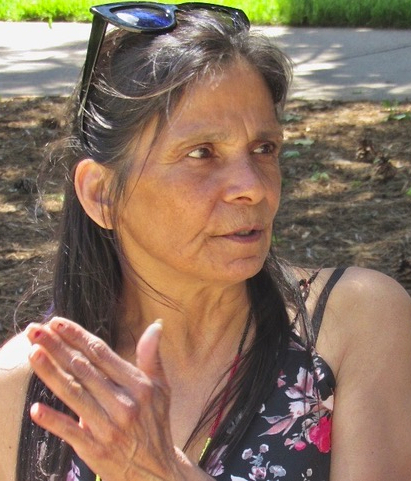 LW5 Organizer Darla Banks (Photo/Neely Bardwell)The current LW5 started in early May on the Leech Lake Reservation in Minnesota as a continuation of the walk her father never got the opportunity to finish. Dennis Banks passed away in October 2017. The long walkers are set to get to Washington D.C. on the National Mall on July 15, the date Dennis Banks would usually finish his walks.

Usually, walkers would cross over the Mackinac Bridge from Michigan’s upper peninsula and then walk straight down to Detroit. Darla is leading the walk on a different path this time, stopping in Grand Rapids and different tribal communities along the way. The walkers plan to visit the Match-E-Be-Nash-She-Wish Band of Pottawatomi Indians, also known as the Gun Lake Tribe, and the Pokagon Band of Potawatomi Indians next on their journey.

Gina Marie Rangel Quinones (Western Chiricahua Clan Apache Pasquale Yaqui Deer Clan), known by her nickname Tracker, explains that this walk is about more than one issue. On their journey, they’ve been stopping at different Tribal communities in Michigan sharing presentations about domestic violence, drug abuse, and diabetes in order to raise awareness. Each of these issues disproportionately affect Native Americans.

Quinones, who has run over 500 miles, wanted to make it clear that anyone, anywhere, can participate in this walk. If you want to participate, you can walk or run however many miles you are able and willing to, and it will reduce the amount that the 10-11 walkers going to D.C. have to complete on their own.

“Anybody who would like to join and bring light to these issues, just know, if there’s an injury you will be well taken care of. If you can’t join our walk where we are, you can donate miles from wherever you are,” Quinones said.

LW5 organizer Darla Banks dedicates this walk to her daughter, Rose Downwind, who was murdered in 2015. When Darla and Dennis tried to help Downwind escape an abusive relationship, all of the places they turned — local police, tribal court, and tribal shelter — were unable to provide much help, according to Darla Banks. Not long after that, Dowwind was murdered by her ex-boyfriend, who was plead guilty in 2016 to second-degree intentional murder, and was sentenced to 35 years in prison.

Mike Loonsfoot (Keweenaw Bay Indian Community), another runner in the LW5 said he’s participating to honor his wife. “Meanness and pain is what causes domestic violence,” Loonsfoot told Native News Online. “You have to take care of the pain that's causing the anger.”

Darla Banks herself is also a survivor of domestic violence at the hands of a man she was with for 17 years.  The man, who was also the father of their daughter, Jessica, snapped and started to become angry and violent with her, Darla said.

“I had to call the police and put him in jail, and I wanted to go back. I wanted to go back and have my family back. I didn't want to do this to him, I loved him. Just because that happened, I wanted to forgive him and go back, but I didn't. I just toughed it out. Because how am I supposed to teach my children, my son, that the better way is to walk away. I had to put somebody I loved in jail.”

Darla’s advice for anyone who knows that someone is experiencing domestic violence is to be very intentional in helping that person, and do whatever you can to get them help.

“I would take somebody if I knew they were in a violent situation. See, I would just grab them by their arm and just say: ‘Hey, you're coming with me right now, because obviously there's something wrong here. You guys need counseling, or anger management or spiritual teachings, or sweat lodge.’”