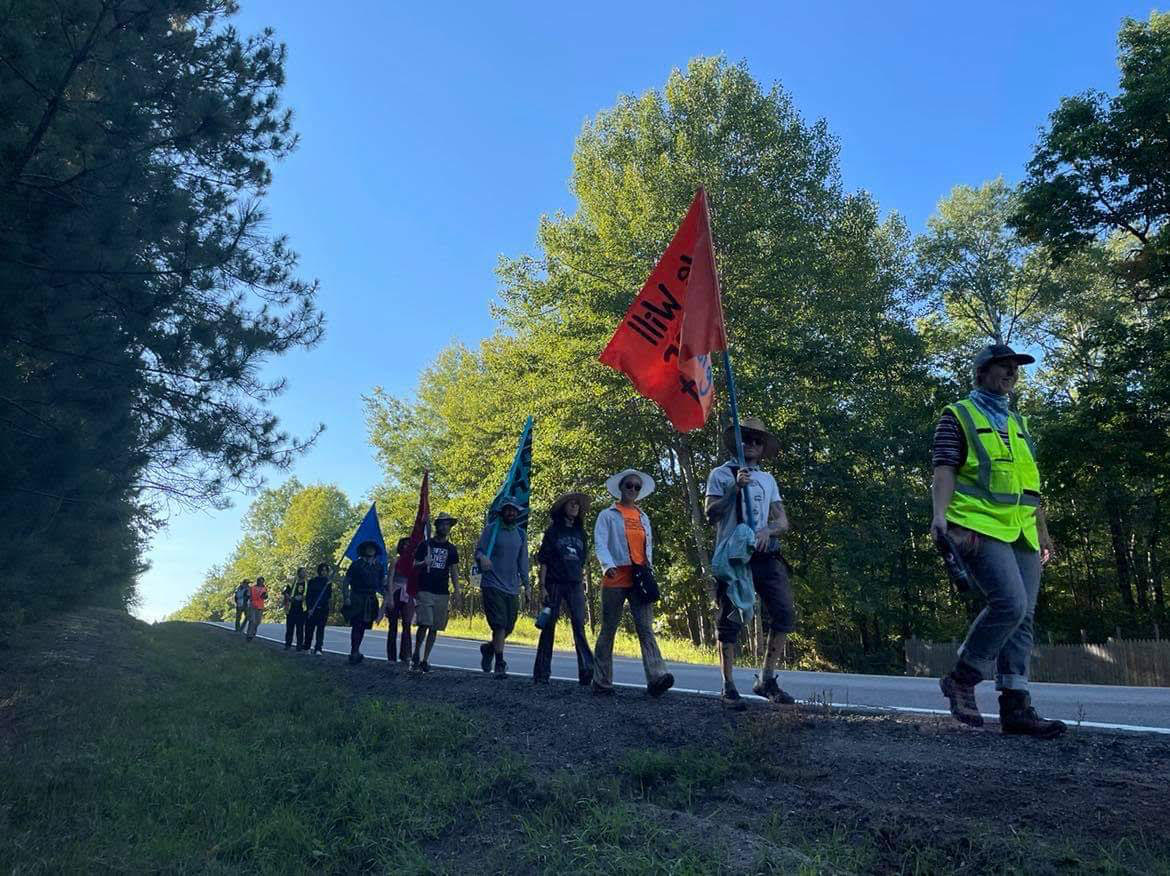 OUTING, Minn. — On Sunday, more than three dozen people left Backus, Minn. on a 160-mile walk to raise awareness about the controversial Line 3 tar sands oil pipeline that’s currently being constructed in the northern part of the state. Organizers plan to make the trek over the next two weeks to Wisconsin Point, a 229-acre freshwater sand bar that sits on Lake Superior in northern Wisconsin near the Minnesota border.

“We’re walking because Governor Tim Walz made a poor decision to permit Line 3 to violate treaties,” Carrie Chesnik, an enrolled member of the Oneida Nation of Wisconsin, told Native News Online. “We’re walking for the next seven generations."

This isn’t the first organized walk to oppose construction of the Enbridge, Inc. Line 3 replacement project. Last month, dozens of people walked approximately 235 miles from Backus to the Minnesota State Capitol grounds in Saint Paul. They were joined on Aug. 26 by hundreds of other walkers to participate in a rally at the Capitol that included more than 1,000 people. Their collective voice was to demand that President Biden and Governor Walz honor treaties that both the federal and state governments have with tribes.

“Treaty is the mechanism that is going to allow all of us to protect the water, the land, and the next seven generations,” Chesnik said. “There is so much destruction going on in our world, and our government can play a role in putting an end to it.”

According to Chesnik, many on the Treaty Walk also participated in the August walk. Some of their efforts are to monitor construction of the tar sands oil pipeline and to pray for the land and water. “The land needs our prayers,” Chesnik said.

The Minnesota Public Utilities Commission’s (PUC) agreement with opponents of the pipeline was to allow people to monitor construction sites, an agreement that has come with over-policing and misinformation from the state of Minnesota Pollution Control Agency, Chesnik said. To date, there have been more than 800 arrests and citations by various law enforcement agencies near the construction sites and more than $2 million of reimbursements to law enforcement by an escrow account paid for by Enbridge.

While monitoring construction near the headwaters of the Mississippi River, there have also been many reported “frac-outs"  — the unintentional return of drilling fluids to the surface during horizontal directional drilling. Horizontal directional drilling is usually done in limited working space, such as near or under waterways. According to Enbridge, construction at water crossings have been completed. The Minnesota Pollution Control Agency is currently conducting an investigation of 28 spills by Enbridge as potential permit violations. The findings will be released later this fall.

In the meantime, construction on Line 3 is continuing. The pipeline is more than 90 percent complete and expected to carry oil by the end of the year. Once completed, the pipeline will transport more than 760,000 gallons of tar sands oil through treaty territory of several Ojibwe tribes in northern Minnesota including the Red Lake Indian Nation, the White Earth Band of Ojibwe, the Leech Lake Band of Ojibwe, and the Fond du Lac Band of Ojibwe.

For those wanting to follow the progress of the walk, or to support the efforts of those walking, please visit the organizers at Treaty People Walk.