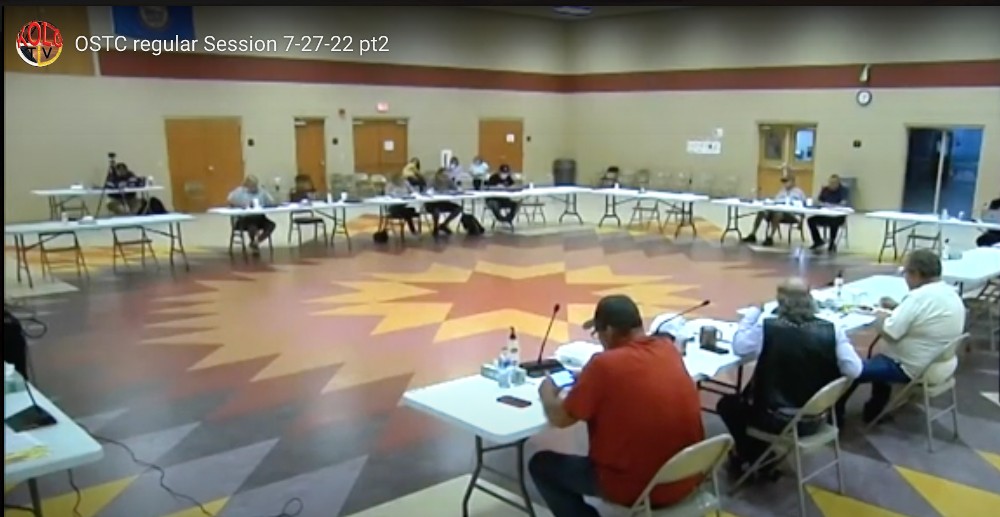 "Tuesday's ordinance was to specifically ask religious organizations to register with the tribe, as they are required to do so with the state of South Dakota," said OST Councilwoman Cora White Eagle during Wednesday's meeting. “It's already a tribal code that when missions start on the reservation that they need approval by the tribal council.”

There was tremendous confusion within the reservation for many people. Funerals, weddings, and other activities scheduled at churches were planned prior to the ordinance the council passed on Tuesday, said OST Councilwoman Jackie Siers at Wednesday's meeting.

OST Councilwoman Sonia Little Hawk-Weston said the decision by the tribal council on Wednesday was a very difficult decision and has upset many people.

She said she is hearing some tribal members are concerned and would rather bootlegging (alcohol is illegal on the reservation) and drug dealing issues be addressed.

"Many of the churches on the reservation are small and have been in the community for a long time, and with this decision we have to tell them they now have to register to raise funds," Little Hawk-Weston said. "I don't agree with that."

"This really got out of hand," said Steele. "Never was it our intent to stop anyone from praying. As Lakota people we know that feeling, being told that we couldn't pray happened to us."

Steele also commented on the tribe's efforts to invite the public to meetings and sessions to discuss bootlegging, drugs and violence in the community, but no one shows up.

There are some Native American Churches on the reservation as well, and some families incorporate the canupa (pipe in the Lakota language) and the bible, and many of them don't ask for money. Questions of whether they are required to register and comply with the ordinance were also brought up.

According to policy on the reservation, people notified by the tribe, or any of its sovereign entities, have the right to request a hearing to challenge the ruling within 72 hours of receiving the notice

According to Matthew Monfore, he hasn't been given a notice or a hearing of banishment from the Oglala Sioux Tribe. "I have not gotten either that I am aware of," Monfore told Native News Online.

"I really don't think non-members should have a say in challenging our authority in deciding that a person is a danger to the community," said Steele during Wednesday's council meeting. "We're a sovereign nation, and the treaties allow us to remove bad men amongst our people.”

Article 12 of the tribe's constitution states, however, that the tribe cannot make or enforce a law that denies any person within their jurisdiction the equal protection under the law, or deprive a person of liberty or property under due process of law. Federal law also requires due process, and banishment isn't common among tribes, even to its own members.

Distinguishment also matters, and whether or not the person is enrolled in the tribe. There isn't much case law regarding banishment among tribes.

Changing the banishment ordinance to apply only to tribal members, or non-tribal members, needs to be motioned and voted by the tribal council and eventually must be approved by the Bureau of Indian Affairs.

Churches and missions have until October 24th to register their activities with the tribal council.