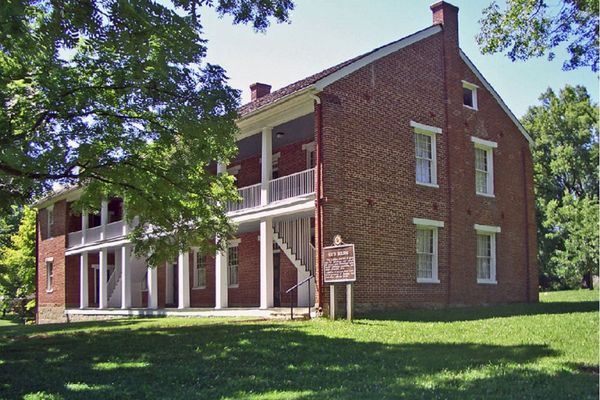 The Kansas Historical Society, a state agency, failed to initiate tribal consultation before approving a roughly $13,000 ground-penetrating radar survey at the site of a former Indian boarding school in Fairway, Kansas.

Tribal leaders and state archeologists believe there are likely children buried on the school property — The Shawnee Methodist Mission — which served as a manual training school for Indigenous children from 1839 to 1862. Children from at least 20 tribal nations, including nations the US government forced into Kansas during The Indian Removal Act of 1830, attended the school.

But tribal leaders and Indigenous practitioners of ground penetrating radar say that the state agency went about the work all wrong.

Instead of first consulting with the tribes who likely have relatives buried at the mission, the state agency finalized a contract with a non-Native geophysical survey practitioner before responding to the Shawnee Nation’s request for consultation.

Barnes said that the issue precisely illustrates why The United Nations Declaration on the Rights of Indigenous Peoples — often called ‘UNDRIP’ for short — exists, to begin with. The declaration establishes a universal framework of minimum standards for the survival, dignity and well-being of the world’s indigenous peoples. Notably, it specifies that states should “consult and cooperate in good faith with the indigenous peoples concerned … in order to obtain their free, prior and informed consent before adopting and implementing legislative or administrative measures that may affect them.”

“This is the point, right?” Barnes said. “This is why UNDRIP insists upon these things, right? Because when [institutions] are left in charge, things go sideways.”

Under the National Historic Preservation Act of 1966, federal agencies or agencies using any federal funds — as the Kansas Historical Society intends to — are required to consult with any Native American tribe that attaches religious or cultural significance to historic properties that may be affected by federal undertakings.

The Kansas Historical Society’s website notes that the agency must provide tribes “a reasonable opportunity to identify and evaluate its concerns about historic properties, articulate its views on the potential effects to such properties by the undertaking, and participate in the resolution of any adverse effects.” However, it doesn’t identify a timeline for consultation or outline requirements for consultation.

Shawnee Tribal Chief Ben Barnes was notified of the intended work in August during a meeting the Shawnee initiated with the new acting director of the Kansas Historical Society, Patrick Zollner, after the passing of the former director.

“He handed me a two-and-a-half page document as I was leaving and said, ‘oh, we’re doing this,’” Barnes said. “That’s not consultation.”

In the preliminary scope of work paperwork Zollner gave Barnes, the date of proposals had already passed, though the work had not yet begun.

Following the meeting, on Sept. 8, The Shawnee Tribe sent an official letter to the Kansas Historical Society requesting formal consultation.

“The Shawnee Tribe is requesting consultation with your office regarding our concerns with this proposal. In addition to the lack of notification about this proposal, we also have concerns with the approach to the research,” Tonya Tipton, Tribal Historic Preservation Officer of the Shawnee Tribe, wrote in the letter shared with Native News Online. “In addition, the Shawnee Tribe is in the process of developing a Cultural Landscape Survey which, once complete, would be a significant resource for informing the survey and locations which may be important.”

In response, the tribe was contacted on Sept. 12 by now-retired state archeologist Robert Hoard, who told them that a contract for the proposed work had been finalized that day.

“The Kansas Historical Society believes it is important to determine if graves or a cemetery are present on the property,” Hoard wrote in a letter obtained by Native News Online. “If graves or a cemetery are located, they could be protected, and could serve as a location for people to visit and honor the graves. There are no observable physical indications of graves or a cemetery on the Mission grounds, such as markers or depressions. Because of this we initiated the process of hiring Dr. Blair Schneider of the Kansas Geological Survey to conduct a geophysical survey of the mission property owned by the Kansas Historical Society.”

The letter also incorrectly stated that Dr. Schnieder and Kansas University had contacted and received input from the Shawnee Tribe “so it was now possible to move forward” with the study.

Zollner told Native News Online that “the project will not begin until the consultation process has concluded.” He said he has not yet signed the project agreement, and that Hoard’s letter “ reflected that our subgrant agreement with KU had been approved by KU for the project.”

“I think that these states have gotten a little out of their league,” Small said. “You hear this a lot, where the SHPO [state historic preservation office] goes in and does a cursory survey. The states themselves need to really consider the legal ramifications because these are sovereign nations. What they’re doing is atrocious.”

Jancita Warrington (Menominee, Potawatomi, and Ho Chunk), the executive director of the Office of Native American Affairs to Kansas Gov. Laura Kelly, and Rep. Sharice Davis of the Ho-Chunk Nation of Kansas, did not respond to Native News Online’s request for comment.