‘The United States lags behind’ on the Rights of its Indigenous Peoples, Natives say 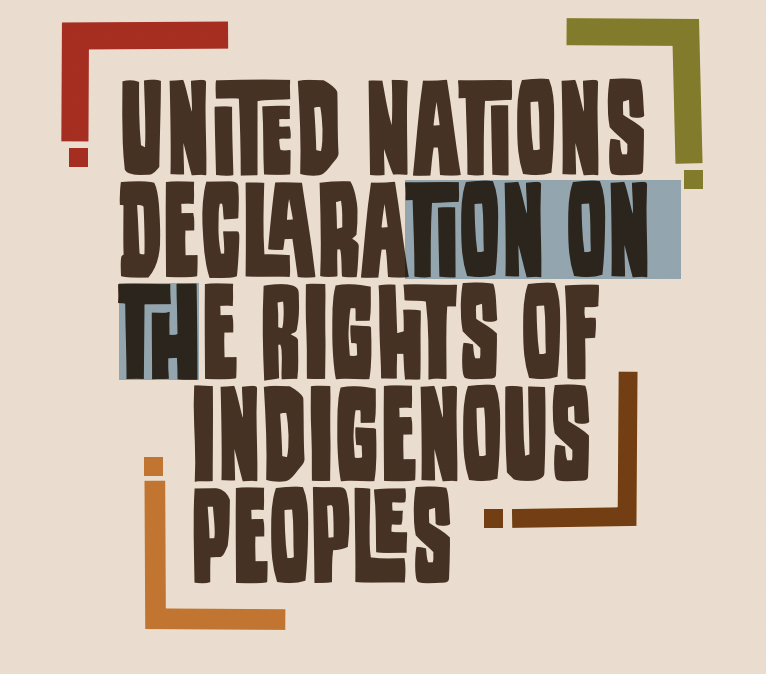 The UN Declaration on the Rights of Indigenous Peoples is a non-binding human-rights standard that includes 46 articles intended for member states to use as guidelines on how to affirm and consider the rights of Indigenous people in their countries.

Negotiations on the Declaration began in 1982 and took 25 years, the longest of any declaration in UN history. The General Assembly finally passed it in 2007 by a 144-4 vote. The four countries that voted against it — Canada, the United States, Australia, and New Zealand — all reconsidered their positions three years later, and the declaration is now considered a “consensus document,” but many questions remain about its implementation, especially in the U.S.

Do they or don’t they?: the United States on supporting the Declaration

The U.S. offered qualified support for the Declaration when it changed its mind to “support” the human-rights standards in 2010, in a 15-page document distributed by the State Department.

“That document qualifies a couple of things that are really important and that really are not consistent with the declaration itself, or the principles of international standards,” Andrea Carmen (Yaqui Tribe) executive director of the International Indian Treaty Council, who worked on drafting the Declaration, told Native News Online. “You don't get to adopt something and then say, ‘Well, this is really how we interpreted it.’”

One of the biggest issues is whether the United States has implemented the principle of “free, prior, and informed consent”: consulting with Native nations and obtaining their consent before adopting legislation or administrative measures that may affect them; before relocating them from their territories; and before approving any project that affects their lands, territories, and other resources, “particularly in connection with the development, utilization, or exploitation of mineral, water, or other resources.”

The State Department document said the U.S. intends “to continue to consult and cooperate in good faith with federally recognized tribes and, as applicable, Native Hawaiians, on policies that directly and substantially affect them.”

Carmen said that the U.S. conflates consultation with consent. The difference is that “consent means the ability to say yes or no.” ​​

The other contentious issue during the negotiations, Carmen remembers, was Article 26, which declares, “Indigenous peoples have the right to the lands, territories, and resources which they have traditionally owned, occupied, or otherwise used or acquired.”

“That’s everything,” Carmen said. “That was one of the hardest-fought — that and the informed consent.”

The U.S. government also contends that its qualified support of the Declaration only applies to federally recognized tribes. That leaves out traditional land bases where most fights over sacred sites — such as Mount Shasta in California, Mount Taylor in New Mexico, and the Grand Canyon — are happening, Carmen said.

‘The United States lags behind’

Bolivia implemented the Declaration into its constitution in 2009, making it legally binding.

Mexico City adopted it into its city constitution in 2017. Since 2019, New Zealand’s Ministry of Maori Development has been creating a plan to codify it into national laws. Canada in 2021 passed a law embracing the declaration and also creating a plan to implement it into law.

This week, Paraguay announced its own national action plan.

“By contrast, the United States lags behind. We are not the leading democracy when it comes to Indigenous rights,” said Walter Echo Hawk, who currently serves as president of the Pawnee Nation Business Council, an attorney and tribal judge who practices federal Indian law.  “We have no national plan here in the U.S. to implement the declaration, and the Biden administration appears strangely silent on the implementation effort here.”

Echo Hawk was a speaker in a UN side panel May 3 on implementing UNDRIP in the United States, hosted virtually by the University of Colorado Law School. The law school partnered with the Native American Rights Fund to form The Implementation Project, a website to collect and post information and examples related to implementing the Declaration.

The panel also included lawyer Keith Harper (Cherokee), former U.S. representative to the UN Human Rights Council and an incoming member of the UN Permanent Forum on Indigenous Issues, and Professor Kristen Carpenter, the Director of the American Indian Law Program at University of Colorado who helped work on the Implementation Project.

U.S. tribal leaders attending the UN Permanent Forum meetings in late April and early May asked it to implement the Declaration in several ways, including as a safeguard of free, prior, and informed consent in protecting tribal self-determination; participation in the International Decade of Indigenous Language to advance language rights; having international museums repatriate sacred objects removed from tribes; and accounting for the harms of the boarding-school era.

“Every one of these statements reference specific articles of the declaration, showing its relevance, and calls for the U.S. and other countries to meet their human-rights obligations to indigenous peoples,” Native American Rights Fund lawyer Sue Noe said May 3.

Implementation tools for the United States

The United States calls the UN Declaration an “aspirational document,” not legally binding like a treaty.

Keith Harper said that he sees the U.S.’s distinction between ‘hard law’ and ‘soft law’ as “a bit of a distinction without a difference.”

Treaties are not self-executing, he said, so just as there must be a mechanism to implement them, there must be a plan to reach an aspiration, as many other countries have shown in their national action plans.

The Declaration established a measuring stick, Harper said: “It provides states specific expectations of how we should measure their conduct. States have to understand what is required of them, and then in how they can say they’re in compliance.”

He suggested that the U.S. should hire a senior-level federal official to implement the Declaration. “During my tenure at State there was the establishment of a special envoy for LGBTI rights,” he said. “And so that individual was at every conversation within the international organizations or bilateral engagement that might give rise to questions of LGBTI rights. So, it prioritizes that issue. It sends a message to the world that the United States believes those rights are critical and advancing those rights are critical, so it has a galvanizing impact as well.”

The Muscogee Creek Nation has passed a resolution endorsing the Declaration into tribal law, as have the Seminole Nation, the Cherokee Nation, and the Navajo Nations Human Rights Commission. The National Congress of American Indians passed a resolution in October 2021, calling on the United States to develop a national plan to implement it.

“It’s no longer right to say, at least generally, that the Declaration is not binding in the United States, because it is actually binding in some places,” Carpenter said. “It's binding in the Muscogee Creek Nation. It may become binding in other tribal jurisdictions.”

Speakers on the May 3 panel also said there’s nothing that would stop a federal court from referring to the Declaration when it’s interpreting current standards. Carpenter said that some federal agencies, such as the Environmental Protection Agency, have explicit guidance on the Declaration in their internal policy.

“There's so much deference afforded to agencies by the federal courts,” she said. “If the agencies themselves with their expertise over certain realms advanced the Declaration, then the courts may well defer to those internal judgments. So that's one avenue.”

The most common suggestion was to look to other countries that have advanced further toward implementation. Caleb Behn, Assembly of First Nations director of rights, told panelists that it might be beneficial to have a cross-border discourse.

This story has been updated to correct quotes from Professor Kristen Carpenter, Director of the American Indian Law Program at University of Colorado, wrongly attributed to Professor Riley. We regret the errors.