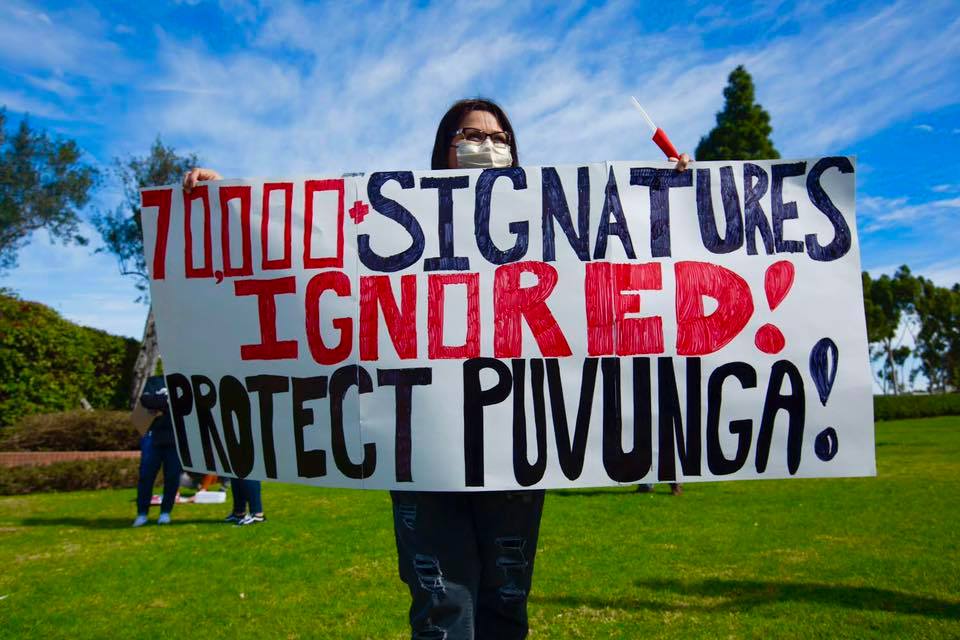 "In our creation story, this sacred site called Puvungna was a place of transformation. It is the place where our diety Wiyot who was a child of Earth and Sky, and from the first people or Kaamalam taught us. At that time, we were all just bundles of energy. Then, Chungichnish emerges and provides us all with new directions, and new forms. We transformed from spiritual beings into physical beings. Some chose the human form, while others chose to become bears, or rabbits, birds or other animals, some chose the mineral form, some stars,” President Joyce Stanfield Perry of the Acjachemen Nation explained. Perry also serves as the tribe’s manager and cultural resources director.

The sacred site of Puvungna is now a 22-acre field adjacent to California State University Long Beach (CSU Long Beach). It sits at the very busy corner of Bellflower Blvd. and Beach Street. Since 1993 the Acjachemen Nation has been struggling with the Cal State system in order to stop development on this sacred site. This site is important also to the Gabrielino/Tongva and other southern California tribes. They have invited other tribal people displaced from their homelands throughout the United States to also join them as a place to connect with one another and the tribal nations of California. Once again, they are fighting to save this sacred site.

"It is such a terrible violation. I can't even express at times the frustration we feel while continuously struggling to educate university presidents and administrations about what their decisions do to our people,” Rebecca Robles, Friends of Puvungna and cultural bearer of the tribe said.

Puvungna is listed on the National Register of Historic Places and on the California Native American Heritage Commission's Sacred Land Inventory. Yet in the fall of 2019, CSU Long Beach began dumping 64 cubic yards of soil from Parkside North Dormitory building area onto Puvungna. The dirt contained concrete rebar, and other debris and was dumped on land that holds archeological artifacts and that is actively used by local tribal groups for ceremonies and celebrations. CSU Long Beach also sprayed pesticides on the meadow and drove heavy equipment over ceremonial areas.  All of this was done without prior consultation with tribal members by the university. According to internal memos obtained from the University, the current President of CSU Long Beach Jane Conaley had plans to construct a parking lot on part of the sacred site.

A joint letter was sent to the California State University Trustees and Governor Gavin Newsom on March 5, 2020 and signed by forty groups from California. Those groups include Native American, social and environmental justice organizations, and are asking CSU Chancellor Joseph Castro, CSU Board of Trustees Chair Lillian Kimbell and Gov. Newsom to act fast and restore and permanently protect Puvungna. Some of those who signed the letter include the California Cultural Resources Preservation Alliance (CCRPA), Fernandeno Tataviam Band of Mission Indians, San Louis Rey Band of Mission Indians, Sacred Sites International, Society of Native Nations, and Center for Community Action and Environmental Justice. The groups are asking that the University clean up the debris, protect the site permanently, and enter into a Memorandum of Understanding to ensure prior informed consultation takes place in the future.

"This is not about what the university president says, or the trustees, or even the governor. It is about the actions they take and what they are willing to do through the law. Native Americans have been given all sorts of promises over the course of 250 years. But it’s the legally binding agreements that have provided some measure of protection for our lands, our peoples, our spiritual traditions, and our cultural heritage," Chairman Belardes said. "There is a long, tragic history in California and across this continent of oppression and cultural erasure of Native Americans. We have an opportunity now with protecting Puvungna to right past wrongs and begin a healing process," Chairman Matias Belardes, Chairman of the Acjachemen Nation said.

The Acjachmen Nation tribal leaders requested an item on protecting Puvungna be added to Board of Trustees agenda on March 23-24. They ask that the trustees enter into a Memorandum of Understanding and directing CSU Long Beach restore and preserve Puvungna in perpetuity. The tribes opening statement will be heard in a court hearing on March 15, 2021.

Nanette Iron Eagle Deetz (Dakota/Lakota/Tsalagi) lives and writes from the San Francisco bay area. She is a published poet, awarded a Lifetime Achievement Award for poetry and activism from the city of Berkeley, a tutor of California Community College, CSU, and UC systems, and a musician with her group Red Bird Giving.