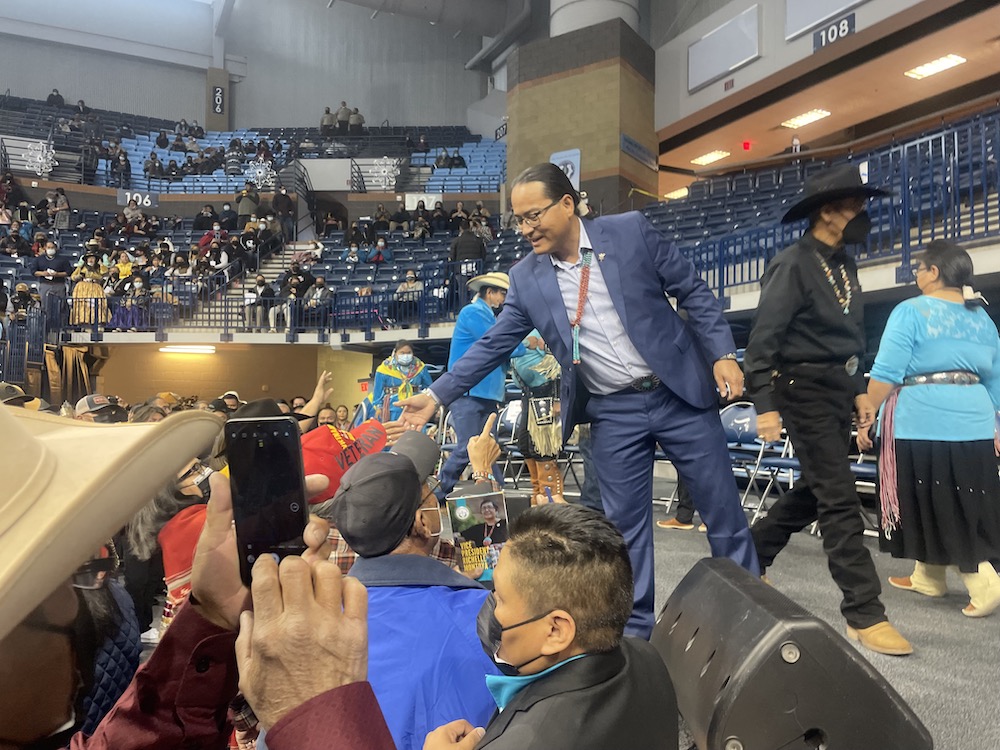 Opinion. On January 1, Native News Online published my opinion column about “4 Stories Indian Country Should Watch Out for in 2023.” Among the four stories was the January 10th  inauguration of Buu Nygren, who turned 36 on Christmas day.

This past week, I was on the Navajo Nation to cover the inauguration of President Buu Nygren. Upon arrival in Window Rock, I felt excitement in the air. On Monday, I stopped by Scott’s Food Stand in Window Rock for some grilled mutton for lunch. A local couple was enjoying mutton stew and fry bread. I introduced myself and asked about their thoughts about the incoming president, the youngest ever to serve Navajo Nation.

“We are looking forward to the change he will bring to us.” Lillian Begaye said. “He campaigned on new ideas. And, we hope he does good things for veterans because politicians always promise things for veterans, but don’t deliver on those promises.”

Frank Begaye, 76, Lillians’s husband, said Nygren, being so educated, will bring much needed economic development to the Navajo Nation.

“We need so much done to fix our infrastructure, like roads,” Begaye said.”With his background in construction, he will be able to do good things for us.”

Begaye was referring to Nygren’s bachelor's degree in construction management and technology as well as a master's degree in business administration, both from Arizona State University. Nygreen also earned a doctorate degree in organizational change and leadership from the University of Southern California.

The Begayes were also excited about the incoming Vice President Richelle Montoya, who became the first ever female vice president of the Navajo Nation. They spoke about the record number of nine females who will serve in the 25th Navajo Nation Council.

On Tuesday morning, a steady flow of patrons on their way to the inauguration stopped by the local Denny’s for breakfast. Navajo men dressed in cowboy boots and hats ate with their wives, who wore traditional Navajo attire complete with Diné turquoise jewelry.

Later that morning, at the Bee Hółdzil Event Center at the Window Rock High School in Fort Defiance, the auditorium filled up in anticipation of the inauguration. Among the crowd were past leaders of the Navajo Nation, mixed with non-Native elected officials from the region, and everyday common Navajo citizens.

Betty Ojaye, a retired educator and an early supporter of Nygren’s candidacy for president, introduced Nygren to deliver his inaugural speech. She began her introduction, which sounded as if the narrative came out of a Horatio Alger novel where young boys come from humble beginnings and go on to achieve great success. Except Oyaye’s description was spoken in Navajo and English.

She began: “Once upon a time there was a young boy growing up on the Navajo reservation. He was born on a snowy day. He was born into a single parent home to a young mother, who was 15 years of age at the time. He did not have the opportunity to know his South Vietnamese father, who was a refugee.

“He lived in a 10-foot travel trailer with no electricity and no running water. He struggled to learn English in school, and he did his homework by a kerosene lamp. As a young boy, he went to Farmington with his mother to sell jewelry and restaurants to help pay bills for his family. He was often rejected by non-buyers.

RELATED:  A Historic Gathering of Navajo Leaders at Inauguration

“The story gets better. In school he would look at pictures on the wall of leaders. Even while he struggled and failed, he heard their ancestral voices. These voices propelled him to graduate from Red Mesa High School as class valedictorian and a recipient of a Gates Millennium scholarship and the Chief Manuelito Scholarship.”

She then went on to talk about the educational degrees Nygran attained.

After Ojaye’s introduction, the 36-year old president-elect approached the microphone to make his inaugural address, mixed with Navajo and English. The speech sounded as if he had borrowed some of the lines from a campaign stump speech with vision to transform the Navajo Nation. At his own admission, he went off script and told the audience he would scroll his tablet to find out what the prepared remarks were that he was supposed to talk about. The crowd responded with laughter.

At one special moment during the speech, Nygren’s wife, former state Representative Jasmine Blackwater-Nygren, demonstrated she will have his back as the Navajo Nation First Lady by bringing him some water to the podium, which he drank almost on cue.

“We campaigned on how we (will) combat the everyday things that hurt and go up against our people like poverty, hunger, thirst, sickness, old age, greed, jealousy and laziness,” Nygren said. “Those are the things that we have always heard for many, many, many years, and that continues to mess with us.”

He spoke with fire as he told the crowd that, regardless of his advanced degrees, his leadership would be about bringing basic life necessities to the Navajo Nation.

“This administration is going to be about you – because we are tired of moving off the Navajo Nation. It's about time the grass is greener on the Navajo Nation,” Nygren said to a roaring crowd.

As a Potawatomi man who will never have the opportunity to vote for Nygren, I was inspired by his speech, which provided hope for a better future for the Navajo Nation. As one of the largest and most visible tribes in the country, Navajo Nation influences how non-Natives — policymakers, federal officials, the media —view and portray Indian Country. What happens on Navajo Nation also affects how we, as Indigenous people, view ourselves and the future for all our relations.

That's why I was encouraged as I left Navajo Nation, thinking that President Nygren will be an inspiration Native Americans, especially our youth. This is an exciting time for the Navajo Nation and all of Indian Country.