4 Stories Indian Country Should Watch Out for in 2023

Opinion. This past week, we looked in the rearview mirror at the inspiring, favorite and top stories Native News Online covered during the 2022. Bringing Indian Country news is our business. We endeavor to publish stories that highlight the important progress and healing in Indian Country. 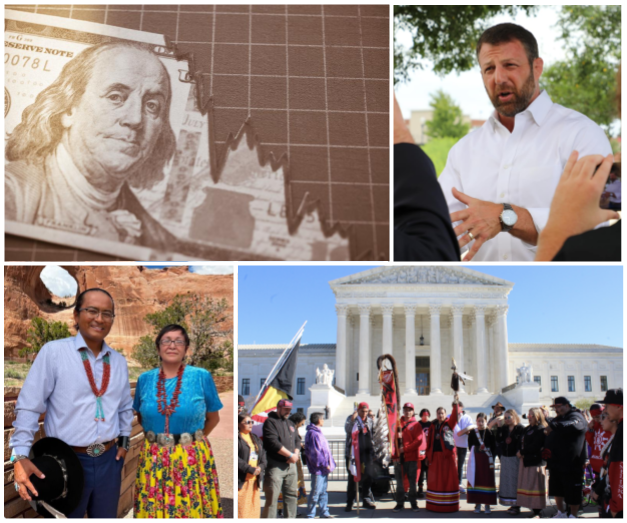 Our important work continues in 2023. Beyond  the ongoing news topics we cover at Native News Online, such as healthcare, climate change, and Indian boarding schools, we have identified four emerging stories we will be paying special attention to in 2023.

Economists differ on whether or not a recession is in the immediate future in the United States.

“I don’t think anyone knows whether we’re going to have a recession or not — and if we do, whether it’s going to be a deep one or not,” Fed Chair Jerome H. Powell said at a news conference in November. “It’s not knowable.”

A recession is defined as a widespread and prolonged downturn in the economy. Economists say that two consecutive quarters of a downturn of the Gross Domestic Product (GDP) constitutes a recession.

If we do have a recession, it should be noted Native Americans suffer at a disproportionate   rate during recessions compared with other racial/ethnic groups in the United States.

According to Challenges to Native Advancement: The Recession and Native Americans report published after the great recession of 2008, Native suffered greatly with some tribes seeing unemployment rates of 95 percent.

“Historically Native Americans suffer more for longer periods of time during recessions than do other ethnic groups…during the recession of the 1980s, Native Americans on reservations saw a decline of real family income that lasted a decade,” the report said.

On November 9, 2022, the U.S. Supreme Court heard oral arguments for Haaland v. Brackeen, the highly contested case out of Texas that challenges the constitutionality of the Indian Child Welfare Act (ICWA).

Congress passed ICWA in 1978 after a national effort to address the widespread practice of removing American Indian children—members of federally recognized tribes—from their homes and placing them with non-Native, white families.

Tribal leaders see the Brackeen v. Haaland case as one of the most significant threats to tribal sovereignty to date.

“Taking Native children from their families and tribal lands has done immeasurable damage to Native people in this country for centuries,” Cherokee Nation Principal Chief Chuck Hoskin Jr. said on the steps of the Supreme Court after hearing. “We were here today, collectively, as Native peoples to make our case in court that the Indian Child Welfare Act is constitutional.”

The Native American Rights Fund Executive John Echohawk (Pawnee) reacted to the oral argument hearing in a recent interview with me: “We're all really very concerned, because their basic argument is that Congress did not have authority to pass the Indian Child Welfare Act. And if somehow that limits the authority of Congress to enact legislation relating to tribes, then we're concerned that it could impact other laws that Congress has passed to help tribes as well. It could really jeopardize all of federal Indian law and tribal sovereignty.”

The Supreme Court’s decision is expected to be released in late June 2023. Tribal leaders are hoping for the highest court in the land to uphold ICWA.

When MarkWayne Mullin (Cherokee) is sworn in as a U.S.senator representing Oklahoma in the 118th Congress on January 3, 2023, he will become the first Native American to serve in the United States Senate since former Sen. Ben Nighthorse Campbell (Northern Cheyenne), who represented Colorado, retired in 2005.

First elected to Congress in November 2012, Mullin is a conservative Republican who has represented Oklahoma’s 2nd congressional district since 2013.

Mullin has been known for talking the “talk” on Native American issues when talking to tribal leaders, but not acting on his talk on Capitol Hill.

This past September, during a speech at the National Indian Health Board’s conference in Washington, D.C. he spoke about his efforts to secure mandatory funding for the Indian Health Service, also known as advance appropriations. Then after advance appropriations were included in the omnibus bill just days before Christmas, Mullin voted down partisan lines and voted against its passage.

Representation matters. It will be interesting to see how Mullin will represent Native American issues as a U.S. Senate.

Buu Nygren to be Inaugurated as Youngest Navajo Nation President Ever

Navajo Nation President-elect Buu Nygren turned 36 years old on Christmas. Raised by his mother and grandmother, he is the youngest person ever elected president of the Navajo Nation.

Additionally, his vice president Richelle Montoya will be the first woman to hold that office on the Navajo Nation.

Nygren and Montoya campaigned on the need for economic and educational change to support business development, sustainable jobs, and strengthening the workforce in Navajo Nation.

The Navajo Nation is 27,000 square miles geographically, the largest large land mass of all Indian reservations.

With his advanced degrees, the youthful president will bring hope to the Navajo Nation that still has portions of its tribal citizens living in third world living conditions.

Native News Online will stay on top of these four stories — and many, many others — during 2023.