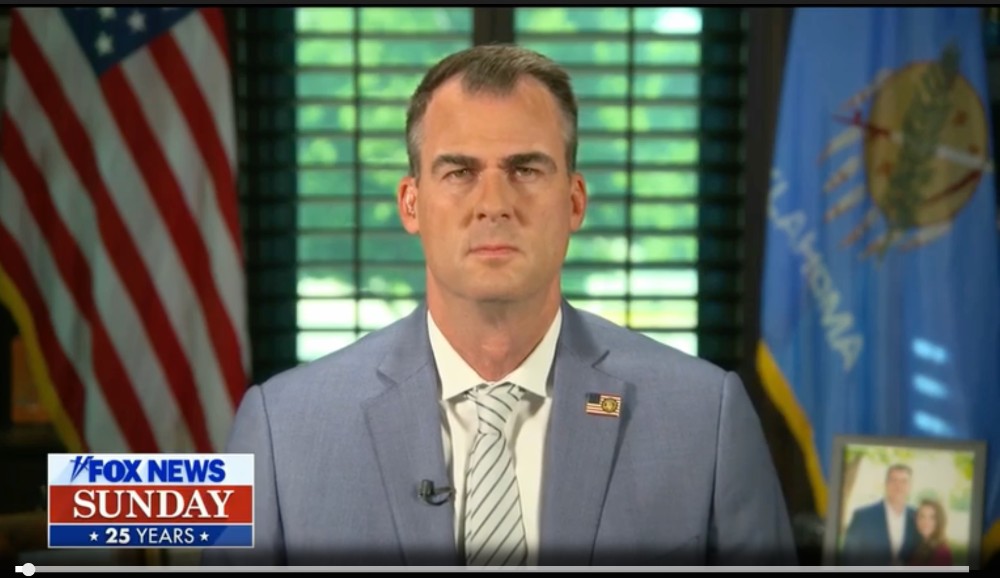 In the wake of signing extremely restrictive anti-abortion laws, Oklahoma Republican Governor Kevin Stitt has made unsubstantiated claims about the right to abortion on sovereign tribal land.

Calling the Oklahoma Tribes “super liberal,” Stitt continued by saing, “We think that there’s a possibility that some Tribes may try to set up an ‘abortion-on-demand’,” Stitt told FOX News on Friday, May 20. “They think that you can be one-one-thousandth tribal member and not have to follow state law.”

To date, however, there are no Oklahoma tribes that have expressed intentions to build clinics offering abortions.

The Cherokee Nation of Oklahoma responded to Governor Stitt’s comments: “Speculating on what tribes should do based on a leaked US Supreme Court draft decision is irresponsible. Just as irresponsible is the Governor of Oklahoma and his disguised media campaign which is really meant to attack tribes and our sovereignty.”

Stitt’s FOX appearance came after the U.S. Supreme Court leak of a draft opinion that would overturn the 1973 ruling of Roe v. Wade, which protects the right to abortions on a federal level.

Stitt had already signed Senate Bill 612 on April 12, which classifies those who perform abortions, such as medical providers, as a felony crime punishable by up to 10 years in prison and a $100,000 fine.

“We want Oklahoma to be the most pro-life state in the country,” Stitt said during the signing ceremony for Senate Bill 612. “We want to outlaw abortion.”

"Oklahoma is trying to be the poster-child when it comes to taking away a woman's rights," Democratic candidate for governor and former Oklahoma state senator Connie Johnson told Native News Online.

Johnson, a longtime advocate for women’s rights, also noted that Oklahoma incarcerates more women than any other location in the world. "We criminalize things here that other states don't," she said.

If Roe v. Wade is overturned, Senate Bill 612 would go into effect 90 days after the state legislature adjourns on May 27. Known as a ‘trigger law,’ the bill bans most abortions in the state, except if the mother is at high risk of death while pregnant. Thirteen states, including Oklahoma, have passed such laws anticipating the overturning of Roe.

However, if pregnant by rape or incest there are no exceptions for abortions if Roe v. Wade is overturned.

Oklahoma has had another ‘trigger’ law that has banned most abortions since 1910, except in life-or-death situations. Under the old law, performing an abortion also would be classified as a felony, punishable by between two and five years in prison. However, since the landmark Roe v. Wade decision that legalized abortion, the state has not enforced the law.

Stitt also recently appeared on FOX News Sunday to discuss a new bill that makes abortions illegal in the state at six weeks of conception.

Stitt’s appearances on FOX News have spread misinformation about Tribal sovereignty and whether or not a Supreme Court abortion decision would apply on Tribal land.

Stitt is an enrolled citizen of the Cherokee Nation, and a vocal opponent of the 2020 McGirt v. Oklahoma decision that determined much of eastern Oklahoma is an Indian reservation, and that the crimes committed on tribal lands by tribal members cannot be prosecuted by state or local law enforcement–rather they must be prosecuted in Tribal or Federal court.

The U.S. Supreme Court is currently considering another case, Oklahoma vs. Castro-Huerta, which will determine whether the state can prosecute non-Native Americans for crimes committed on tribal lands if the victim is a member of an Oklahoma-based Tribe. A decision is expected early this summer.

Regardless of the outcome of Castro-Huerta, it is unlikely that Tribes would open a clinic that provides abortions. The chief medical provider on Tribal lands for citizens of tribes is the Indian Health Service (IHS), a federal agency within the U.S. Department of Health and Human Services. Abortions are largely excluded from health care delivered by IHS because of the Hyde Amendment, which prohibits the use of federal dollars on abortions except in the cases of rape, incest and if a mother’s life is in danger due to the pregnancy.

If clinics and providers were to provide abortions on tribal lands, they would have to be funded privately and need to navigate local, state, and federal laws. Since Tribal doctors are licensed by state medical agencies, it’s also unlikely that they’ll perform abortions within the state.

On May 17, Cherokee Attorney Mary Kathryn Nagle tweeted that the discussion of land and jurisdiction in Oklahoma isn’t just about safety, but about politics and power.

In 2006, former Oglala Sioux Tribal president Cecilia Fire Thunder announced she would facilitate plans to build a Planned Parenthood on the Pine Ridge Indian Reservation after the state legislature banned most abortions in the state. She was impeached by the Oglala Sioux Tribal Council in a 9-5 vote for speaking out against the state's abortion ban in July 2006.

When asked by Native News Online if she had an opinion on Roe v. Wade potentially being overturned, Fire Thunder responded with a meme that read, “Ejaculate responsibly.”

Indigenous women in the United States are slightly more than twice as likely to die from conditions caused by pregnancy than white women, according to a study published by the CDC in 2016.