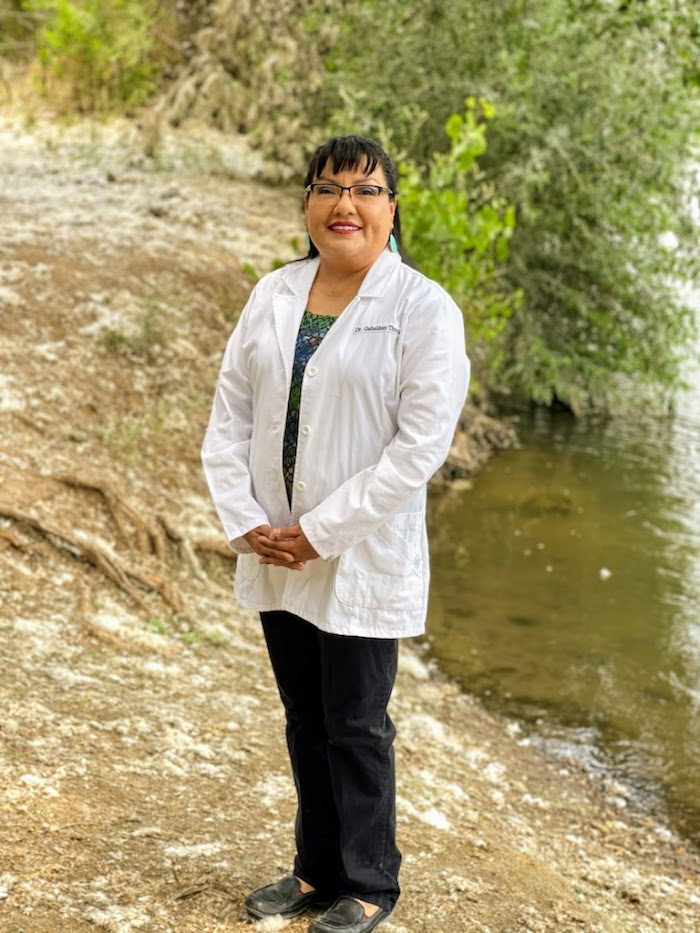 Dr. Denise Gabaldon-Thronas, born and raised at Ohkay Owingeh Pueblo in Northern New Mexico, approaches her practice of medicine as though she’s an archeologist, digging to find the root cause of an ailment.

Gabaldon-Thronas specializes in Naprapathic Medicine, a type of holistic, manual therapy that treats stress, aches, and pains without drugs. Instead, the practice focuses on gentle manipulations of ligaments, tendons, and connective tissues to align the spine.

“Muscles tend to relax when the spine is aligned. A lot of times when there's imbalances, that's when we have pain,” Gabaldon-Thronas told Native News Online. But pain isn’t always at the sites of an issue, she says.

“Oftentimes it's away from the pain, either below that area or beneath it. So if it's my knee that's hurting, it might actually be my ankle or my foot that's causing the problem. We do a lot of archeological digs on finding the root cause of problems, not just treating the symptoms.”

The scope of naprapathic medicine is three fold: it includes the biological (the body), the biochemical (the mind), and the psychosocial (the spirit). It goes beyond Western medicine and taps into Indigenous knowledge, and Gabaldon-Thronas’ own belief system.

Gabaldon-Thronas finds that, once you’re able to address someone's pain by aligning their spine, other aspects of their health, such as mental stressors, are able to heal themselves.

“They can start moving, their mental health does get better, they do feel better about themselves. And the more exercise they get, the more endorphins they produce in their own body,” she said.

But before Gabaldon-Thronas was a practitioner, she was a patient.

The doctor, whose background is in biochemistry, spent her career predominantly as a chemist at Los Alamos National Laboratory in New Mexico. When her job title transitioned from the role of a chemist, always on her feet, to a more sedentary role as manager, she experienced the first back spasm of her life.

“I went to the doctor, and they just gave me muscle relaxants and some pain relievers. And I was like, well, this doesn't make sense,” she said. She wasn’t allowed to take opioids without risking her security clearance at work. Then, she remembered she had kept the business card from a naprapathy clinic that presented at a health fair at the lab two years earlier. She called and asked if they could help.

“That just changed my life,”she said. “It really showed me how my body position was trying to get adjusted to my new working position, and how I had to really consciously take breaks. I had to move, I had to start going to an exercise class [to] ​​make sure that my postural muscles weren't going to weaken because of my new [role] sitting at the desk.”

Gabaldon-Thronas graduated with her doctoral degree from SUNM in 2019 and received her medical board license in 2020. She now teaches at the university on courses related to theory and its application to the body. She also works part time as a practitioner at Naprapathic Medicine of New Mexico.

“Being Native, [Naprapathy] resonated with me because it's a holistic approach,” she said. “It's very much in line with my traditional beliefs too, because it combines all those three things—mind, body and spirit. It's not hard for me to know that those three things together are what makes the philosophy work.”

Now, Gabaldon-Thronas’ goal is to bring the practice to Indigneous communities she believes could benefit.

“I think the opioid epidemic in Native communities is impacted disproportionately due to the lack of education regarding chronic pain treatment alternatives,” she said.

Native American communities throughout the United States have suffered some of the worst consequences of the opioid epidemic of any population in the United States. American Indians and Alaska Natives had the highest drug overdose death rates in 2015 and the largest percentage increase in the number of deaths over time from 1999-2015 compared to other racial and ethnic groups, according to court documents filed in the tentative $590 million settlement reached earlier this month between the three largest drug companies in the nation and 418 federally recognized tribes that brought lawsuits against them.

“Naprapathy is a legitimate solution, because it is root cause driven,” she says. “It is not just treating the symptoms of pain, but pain management and understanding in a holistic approach how to treat the imbalances in the body both internally and externally in order to allow the body to heal.”

Gabaldon-Thronas is currently working with the American Indian Business and Entrepreneurial Group to establish her own practice and serve the eight northern pueblos surrounding her in New Mexico.

Her other long term goal is to increase the number of Native American practitioners by leading by example.

“If you want to see a change in the world, you become that change,” she said. “That's why I left my job at Los Alamos to do this, because I believe in Naprapathy so much.”