Passamaquoddy One Step Closer to Regulating their Own Water Supply

“Certain times of year, the water is brown,” Corey Hinton, Passamaquoddy, told Native News Online. He’s describing his tribe’s drinking water that comes from nearby Boyden Stream Reservoir, fed by a lake that’s often used for recreational purposes, and as a dumping ground for waterfowl.

“The end result is that the water that is delivered to both the Passamaquoddy tribe and to the neighboring city is often discolored, like a brown or a yellow,” Hinton said. “ It often smells like a rotten egg, or at other times like chlorine. It's been known to cause skin irritation and burning of skin in children. This is a problem that has been no existence for many years.”

For years, the tribe has been advocating for the passage of a bill that would allow them to regulate their own drinking water. On Thursday, that bill received approval from the Maine Senate, and is now on its way to the governor’s desk for final approval.

Currently, the state of Maine regulates the Passamaquoddy’s water system. Maine’s unique jurisdictional arrangement with its four federally recognized tribes— derived from the Maine Indian Claims Settlement Act of 1980— gives it certain powers over tribes that are normally reserved for the federal government. If the clean drinking water bill passes, it will be the first time that Maine relinquishes its jurisdiction over tribal lands in any way, Hinton said.

“This bill represents one of the first ever attempts by a single tribe [in Maine] to take a narrow issue and overhaul the settlement act with respect to that issue,” Hinton, who is also an attorney for his tribe, told Native News Online. “In the past, the Settlement Act has been a mandate. With LD 906, we are flipping the paradigm so that the state of Maine will no longer have jurisdiction over any issues related to drinking water on Passamaquoddy lands.”

The bill does three things:

First, it exempts the Passamaquoddy Water District, a non-tribal entity and the water district in the state of Maine that pays property taxes, from taxation by municipal governments. Savings collected would instead go towards the cost of maintaining the filter upgrades.

Then, it authorizes two parcels of tribally owned fee land near the Passamaquoddy Indian territory to be added to the tribe’s territory through the federal trust acquisition process, in order to provide access to alternate supplies of groundwater.

Last, it provides that the United States Environmental Protection Agency, and not the state, the  authority to regulate drinking water standards within Passamaquoddy Indian territory. 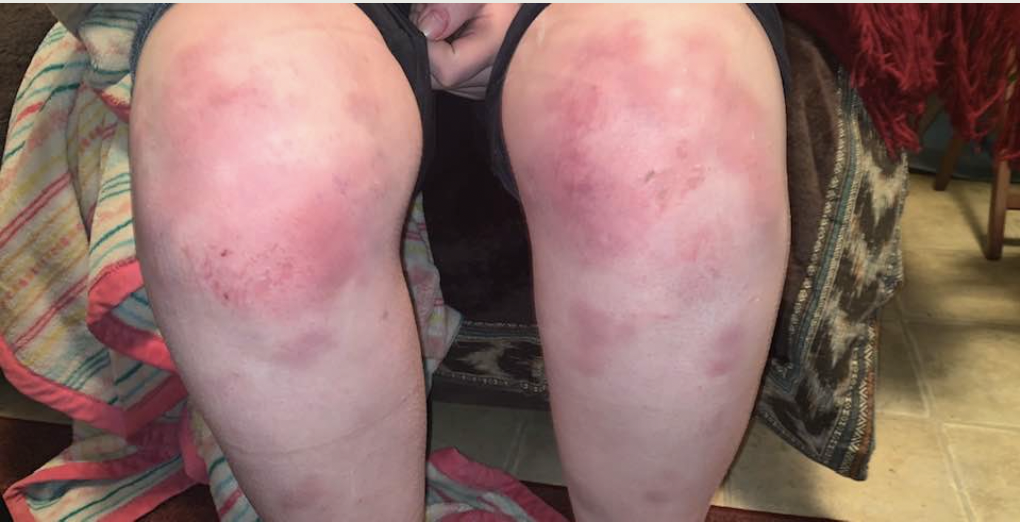 Pictures of a young boy's legs, after he bathed in the contaminated water from Boyden Stream Reservoir. (Photo/Courtesy Noela Altvater)

“Nothing about this will change the water overnight, that water supply will still continue to be the dirty supply that it is with birds using it as a toilet,” Hinton said. “But our hope is that the district would be better equipped to clean the water. And that through some of the lands that will be protected, the tribe may actually be able to potentially provide an alternate drinking supply to the water district.”

A final decision on the bill from Democratic Gov. Janet Mills is expected soon. Also today, the Maine Legislature heard oral arguments for another, larger sovereignty bill that would reinstate the four federally recognized tribes’ sovereignty. A House vote on that bill is expected Friday, April 15.