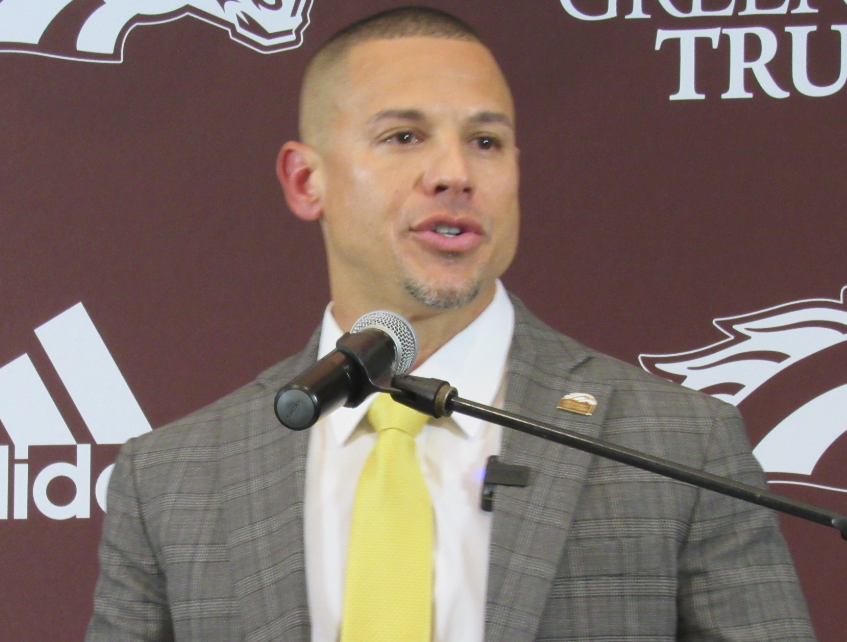 KALAMAZOO, Mich. — With music provded by the Western Michigan University’s marching band and cheers from cheerleaders, Lance Taylor (Choctaw), accompanied by his wife and two young children, walked into Heritage Hall on Friday afternoon for what can be described as part pep rally and part press conference to be introduced as the head coach of the WMU Football program.

Friday’s event comes one day after the university announced his hiring to be the 17th football head coach.

Taylor, 41, a member of the MOWA Band of Choctaw Indians, which is a state recognized tribe in Alabama, excited the crowd with his fiery conviction to play the game to win. He began his remarks with “Go, Broncos”

During the Q&A portion of the press conference, Taylor was asked by Native News Online how he integrates Native American warriorship into his coaching style.

“I grew up two miles from my reservation and grew up going to powwows, learning our culture, history, and traditions. It was woven and made me who I am today. It is part of the fabric of what I do and what I believe in,” Taylor said. “I think it will come out through our program as I carry out our mission every single day. So, I am proud of my heritage and love my people and I know they are proud of me.”

Kurt Trevan (Gun Lake Tribe), an undergraduate of the university, currently sits on the Western Michigan University’s Board of Trustees.

“The hiring of Coach Taylor is a huge win for the university and also for Indian Country. He exemplifies the result of hard word and determination, and will serve as an inspiration for our Native youth to dream big,” Trevan said to Native News Online on Friday.

Dan Bartholomae, WMU Athletic Director told Native News Online while the university was able to hire the best candidate in the pool of finalists, Taylor was one of the best leaders he talked to in the selection process.

“One that inspired me was how his Choctaw heritage, the life experiences that he drew from as a part of the tribe, and his pride in his family history impacted his amazing rise to the top of our profession,” Bartholomae said.

The WMU Football program is part of the NCAA’s Football Subdivision of Division I and is a member of the Mid-American Conference (MAC).

Taylor is currently the only Native American coach at the Division I level. Previously, Jerome Souers (Cheyenne River Sioux) served as head football coach at Northern Arizona for 21 years before stepping down from that position in 2018.

During those three seasons with the Irish, Taylor guided running back Kyren Williams to a pair of 1,000-yard seasons in 2020 and 2021. Williams rushed for 1,002 yards and 14 touchdowns last season. As a redshirt freshman in 2020, he produced 1,125 yards and 13 scores to earn Freshman All-American accolades and was a finalist for Freshman of the Year.

Taylor had two coaching stints with the Carolina Panthers, where he coached Wide Receivers. In 2013 the Panthers finished 12-4, winning the NFC South.

In between his two coaching stops with the Carolina Panthers, Taylor coached running backs at Stanford, where he coached and mentored Heisman Trophy runner-up Christian McCaffrey and recruited a second Heisman runner-up in Bryce Love. McCaffrey and Love hold three of the top five rushing seasons in Stanford history. While with the Cardinal, Taylor won a Pac-12 Championship, a Rose Bowl and was named the 2015 FootballScoop.com Running Backs Coach of the Year.

Taylor spent the 2010 – 2012 seasons with the New York Jets as an offensive quality control coach and assistant tight ends coach.  During the 2010 season, the Jets won their wild card game and divisional playoff game against the New England Patriots and appeared in the AFC Championship game.

In 2009, he coached wide receivers at Appalachian State, where under his guidance the Mountaineers set school records with 284 receptions and 3,621 receiving yards. The team finished 11-3, won the Southern Conference title and advanced to the Football Championship Subdivision semifinals.

He began his coaching career as a graduate assistant for Nick Saban at his alma mater, Alabama, from 2007-08.

A walk-on at Alabama before earning a scholarship, Taylor played in 38 consecutive games at wide receiver from 1999-2003 for the Crimson Tide. As a senior, he served as a special team's captain for (then) coach Mike Shula.

Taylor played professionally for the Colorado Crush and Columbus Destroyers of the Arena Football League, and AF2's Green Bay Blizzard and Louisville Fire from 2004-06.