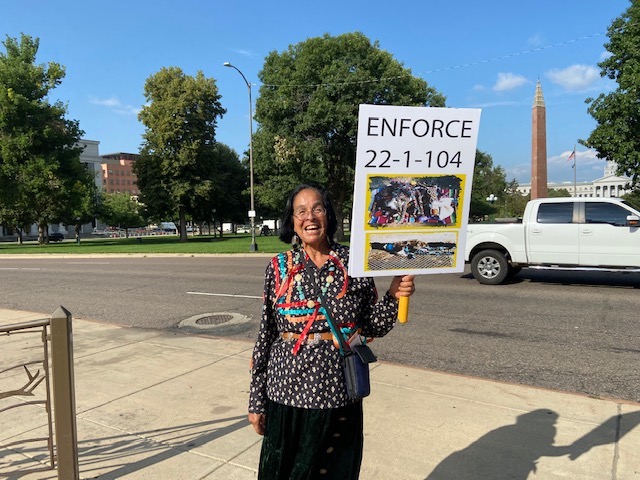 DENVER—Seventy-year-old Carol Harvey (Navajo) is fed up. The school her grandchildren attend 30 minutes outside of Denver continues to leave out Native Americans in its teaching about the history and formation of the United States, she said. That’s despite legislation passed 23 years ago mandating its inclusion.

In protest, the retired attorney has committed to picketing in front of the Capitol building in downtown Denver for one hour a day, three days a week.

She plans to do so until Gov. Jared Polis agrees to her request: to conduct a state-wide investigation into each districts’ compliance with the law, a request Harvey made in a petition she filed with the governor last week. She’s got a call scheduled next week with the US Attorney’s Office in response to her petition.

“I just think: hey, it’s time,” Harvey told Native News Online. “What I asked for was a statewide investigation, because I think (the school districts are) actually complicit. I think they all just agreed, you know, we're not going to teach this unless someone forces us to.”

In 1998, under Comanche State Senator Suzanne Williams, American Indians were added alongside African Americans and Spanish Americans into the state standard for teachings on US and Colorado history, culture, and social contributions. Five years later, that civics class became the state’s only required course for graduating seniors. Every other requirement is set by individual school districts.

But Harvey alleges that the Cherry Creek School District, where her grandchildren attend school, is out of compliance with the state’s requirement because it is not teaching Indigenous histories in social studies courses. She said her grandchild, a recent graduate, was offered a choice between either an American US History course or an Advanced Placement US government course, neither of which included minority content.

“They don't need to teach a separate Indian course, they just need to teach that civil government course that has those three minorities in it,” she said. “I can tell you there is no course.”

According to the school district’s online curriculum, which only outlines conceptual focuses, “Native People of CO” are mentioned once in 4th-grade social studies curriculum, but not again for high schoolers. However, each of the eight high schools in the district present its curriculum more thoroughly on their own website.

A spokesperson for the Cherry Creek School District, Abbe Smith, told Native News Online that “while Indigenous history is definitely taught in numerous high school social studies courses, I cannot speak to the consistency and depth in each relevant course.”

The difficulty with checking for compliance at all 178 schools in the state of Colorado is that the state does not set curriculum, and therefore it varies widely district to district. Instead, the Department of Education sets learning standards, revised every six years, that each school district must meet in building their own curriculum.

Colorado is one of 10 states that provides a curriculum to meet that requirement. The other nine are: Oregon, Hawaii, Montana, Idaho, Connecticut, Wisconsin, and North Dakota, California and New Mexico, according to a 2019 survey conducted by The National Congress of American Indians.

According to a Colorado Department of Education spokesperson, Joanne Bruno, there is no audit of schools’ compliance.

“The mechanism we have in place is we have a state assessment in social studies,” she said. “That’s one way to develop accountability in what’s in our standards. Outside of that, there is no specific mechanism.”

Bruno said she was unaware of Harvey’s petition but has “no reasons to believe” that schools are out of compliance with the law. “Indigenous Peoples history is part of US and CO history, which are part of our state standards,” she said.

In other areas of the state, tribal leaders say they’ve worked together with the Department of Education to bring knowledge about local tribes to students.

At the Southern Ute Indian Tribe —one of two federally recognized tribes in the state—Director of Education  LaTitia Taylor told Native News Online that the materials are there, it’s just a matter of building relationships with school districts to implement them. She worked with the state to develop a 4th grade curriculum on the Ute people of Colorado.

“Colorado Department of Education, they're very open to all of it,” she said. “They work with us very closely. They even put in an employee that specifically works with Native populations.”

The state social study standards are currently under review as part of a regular process every six years, and following 2019 legislation mandating the inclusion of additional minority groups into social studies curriculum.

According to Bruno, these new standards are being developed with the recommendations of a 16-member committee composed of minority groups and educators, and won’t be finalized until June 2022.

In the meantime, Harvey says, all Colorado schools should be complying with the existing law.

“They're trying to kind of get out of the whole problem of never having (to ensure Native Americans are included in statewide curriculum) by saying, ‘Well, we're doing it now’,” Harvey said. “But what I'm trying to say is, look, you’ve had all this time, you’ve had (23) years since Comanche Senator Williams introduced this legislation to teach about Indian history, culture and contributions. I’m marching until there's a course.”