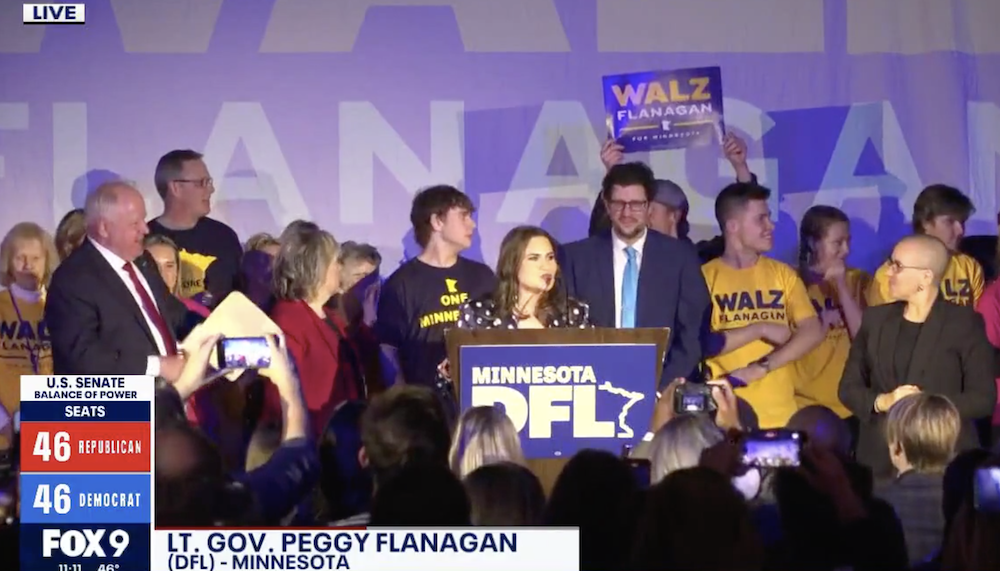 Upated 2:54 p.m. ET | Nov. 10 - Incumbent Rep. Yvette Herrell (R-NM), a member of the Cherokee Nation, conceded yesterday in her race with Democrat Gabe Vasquez to represent New Mexico's 2nd District in the 118th Congress. Herrell was seeking a second term in the U.S. House.  The AP called the race this morning.

“While we are disappointed by the final results, I am incredibly proud of our team and the work we did serving our district, and I am grateful for the steadfast support of so many who helped us along the way,” Herrell said in a statement. “I’d also like to congratulate Gabe Vasquez on his victory.”

The race earned national attention as Republicans and Democrats battle for control of Congress. The win by Vasquez flips a seat in the House, and Mexico's congresssional delegration will all be Democrats in the next Congress.

Republican Markwayne Mullin, a citizen of the Cherokee Nation, won a special election to represent Oklahoma in the U.S. Senate. With the victory, which was called by the AP shortly after the polls closed, Mullin becomes the first Native American to serve in the U.S. Senate since former Sen. Ben Nighthorse Campbell (Northern Cheyenne) retired in 2005.

Sharice Davids (Ho-Chunk) won a third term to represent Kansas in the U.S. House. Davids, a Democrat who made history as one of the first Native American women to be elected to Congress, beat back a challenge by her Republican opponent in a redrawn district. Davids earned 55% of the vote, while her Republican opponent Amanda Adkins won 42% in the election.

Republican Tom Cole (Chickasaw Nation) won an 11th term to represent Oklahoma’s fourth district in the U.S. House, easily defeating Democrat Mary Brannon. Cole, co-chair of the House Native American Caucus, earned 67% of the vote, while Brannon won 33% of the vote. The win allows Cole to extend his streak as the longest-serving Native American in the history of the House.

In Alaska, incumbent Mary Peltola (Yupik) appears to be on track to win the state’s at-large House seat, which was occupied by Republican Don Young for 49 years.  Peltola, who won the seat just two months ago in a special election, leads her GOP opponents, former Governor Sarah Palin and Nick Begich III, by a considerable margin. Because of Alaska’s new ranked-choice voting system, which requires one of the candidates to win more than 50% of the votes to be declared a winner, the results of the Alaska election may not be decided for several weeks.

Another race involving a Native American candidate was too close to call this morning:  Incumbent Yvette Herrel (R-NM), a member of the Cherokee Nation, is in a tight race with Democrat Gabe Vasquez for New Mexico’s 2nd Congressional District.  Vasquez held a slim lead of about 1,227 votes at 4:35 p.m. this afternoon, with 95 percent of the vote counted, according to the New York Times, which still lists the contest as a "toss-up."

Lynette Greybull, who is Northern Arapaho and resides on the Wind River Reservation, was defeated in her bid to win Wyoming’s lone seat in the U.S. House. Trump-backed Republican candidate Harriet Hageman won nearly 70% of the vote and will fill the seat currently occupied by ousted GOP Rep. Liz Cheney.

In Nevada, incumbent Mark Amodei, a Republican, won a 7th term to represent the state’s 2nd Congressional District, defeating Elizabeth Mercedes Krause (Oglala Lakota), who is the first Indigenous woman to run for Congress in Nevada.

Three other Native candidates lost their races to earn seats in the House:  Charles Graham (Lumbee) was beaten by incumbent David Rouzer in the race for North Carolina’s 7th district in the U.S. House; Republican Joe Akana (Native Hawaiian) lost to Democrat Jill Okuda to replace incumbent Congressman Kai Kahele, who did not run for reelection; and Democrat Taysha DeVaughan (Comanche Nation) was defeated by incumbent Morgan Griffith in her effort to represent Virginia’s 9th district.

In South Dakota, incumbent Shawn Bordeaux (Rosebud Sioux) retained his seat in the state senate, defeating Republican Joel Koskan, who was arrested and charged with multiple counts of sexual abuse against a minor child last week.

NOTE: A paragraph was deleted during our production process about the results of the Wyoming Congressional election involving Lynette Greybull (Northern Arapaho).  The story has been updated.