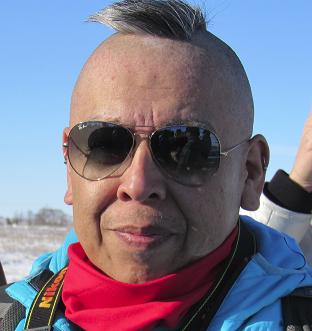 The minor, who is currently under the age of 16, originally reported the behavior to a local Department of Human Services (DHS) worker on October 5, 2021 according to documents filed January 10, 2022 by the state of Oklahoma in the District Court of Pawnee County.

In an inteview with a Pawnee County DHS worker, the girl vividly recounted incidents where she was repeatedly touched inappropriately by Echo-Hawk, 46, between “from the time she was 7 or 8 until 11 or 12 years old,” but that she didn’t realize what was happening was sexual in nature until she got older.

Based on the information in the report, District Attorney of Pawnee County Mike Fisher charged Echo-Hawk with lewd or indecent acts to children under 16. The crime is a felony and punishable with three to 20 years in jail.

Echo-Hawk was arrested on Jan. 10, and released on a $10,000 bond under the condition he appear in court for his preliminary hearing on March 15. The public learned of Echo-Hawk’s arrest over the weekend from a local publication in Oklahoma. Native News Online obtained court records Monday morning to confirm the facts prior to publication.

According to court documents, Echo-Hawk denied “any and all allegations of inappropriate touching or fondling” to the DHS worker and the Pawnee police officer on the case.

Echo-Hawk’s lawyer, Dan Good at the Atkins Markoff Adler Law Firm told Native News Online that, as a matter of procedure, the court has entered a plea of not guilty on Echo-Hawk’s behalf.

Good said his client has cooperated with the investigation. “I think it’s unfortunate that these charges were filed, but we’re looking forward to his day in court,” he said.

Native News Online reported that last October, Echo-Hawk was driving when his vehicle was hit in a head-on collision. The crash injured Echo-Hawk and killed his 15 year old daughter, Alexie Heline Echo-Hawk.

As a result of the accident, the Echo-Hawk family raised over $160,000 on GoFundMe to support his recovery.

This story has been updated to protect the identity of the victim. We regret the error.