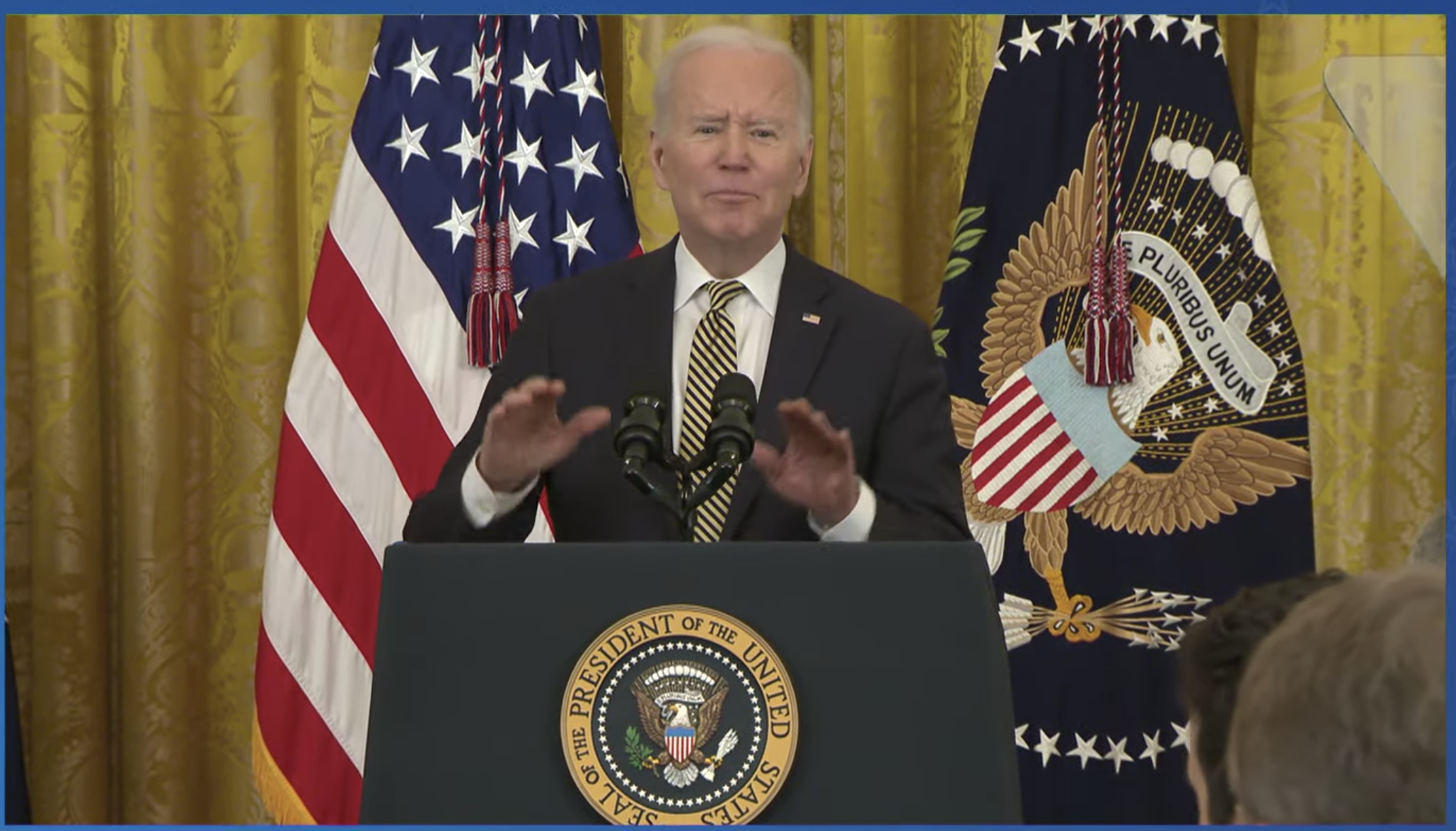 Shortly after 2pm on Wednesday, President Joe Biden addressed the nation after signing into law the Violence Against Women Act Reauthorization Act (VAWA) of 2022, legislation with specific provisions to enhance protections for Indigenous women. The updated legislation contains a major win for Indian Country sovereignty.

The law, which Biden first introduced as a then-Senator in 1994, was the first of its kind meant to help prevent and improve the response to domestic violence, dating violence, sexual assault, and stalking. The bill has been reauthorized several times over the past three decades, but lapsed four years ago and hasn’t been officially renewed since.

“Every time we reauthorize this law, it's been improved,” Biden said in his address. “It's not like we didn't know we wanted to do these other things in the beginning. We did as much as we could, and keep trying to add to it.”

When Biden ran through the list of major changes to the bill, attendees to the in-person event broke into applause at the mention of a major win for Indian Country—restored jurisdiction to tribal courts.

“Tribal courts will now be able to exercise jurisdiction over non-Native perpetrators of sexual assault, child abuse, sex trafficking and so on,” Biden said, followed by almost 20 seconds of audience applause.

The change represents the first time since 1978 decision that tribes will have the ability to prosecute non-Indians, who were unfamiliar to their victim, who commit sexual assault against Native victims on tribal lands. VAWA already accounted for intimate partner violence and perpetrators familiar to their victim.

U.S. Rep. Sharice Davids (D-Kansas) said in Indian Country Today’s newscast yesterday that the bill is much of what she’s been fighting for since joining office in 2019.

“I'm really glad that we were able to come together and finally get the updates that were needed through, and that includes bringing resources and attention to Indian Country and particularly for the crisis that we're in with the [Missing and Murdered Indigenous Women] MMIW,” Davids said.

Indigenous advocates and lawmakers believe that closing the jurisdiction loophole in the Violence Against Women Act stands to have a positive impact on keeping Native people safe in their communities.

Indigenous attorney and partner at Pipestem and Nagle Law, P.C., Mary Kathryn Nagle (Cherokee Nation), said in a Missing and Murdered Indigenous Persons Panel on Monday that the reauthorization is “historic.”

“There's just really no question that, when President Biden signed this into law, this will go a long way towards addressing the MMIP crisis,” Nagle said. “It certainly isn't a full on fix, but it is a major, major step forward—one that for many of us here on this panel tonight have been working on for the last four years, (as have) all the generations before us.”

The reauthorization includes bolstered protections for survivors of domestic violence and sexual assault, enhanced legal tools and local trainings for law enforcement officers, and an increased emphasis on data collection and sharing between state, tribal, and federal agencies. It also allows previously excluded tribes in Maine and certain Alaska Native villages access protections under the law, as well as a pilot program in Alaska Native Villages to enhance access to safety for survivors.

“In Indian Country, we've been advocating for this reauthorization for years, even as we've been effectively protecting our people,” he said in a recorded statement from the White House, where he was invited to attend the VAWA Reauthorization signing. “We finally got to a point where it has been reauthorized, and that's a reason to celebrate.”

The National Congress of American Indians (NCAI), too, applauded the bill’s reauthorization.

“The historic tribal provisions in this bill attest to years of powerful, collaborative efforts between survivors, tribal leaders, and allies across Indian Country,” NCAI President Fawn Sharp said in a statement. “We commend Congress’ momentous action to reauthorize the Violence Against Women Act and now, by exercising our inherent sovereignty and jurisdiction, Tribal Nations will continue to increase safety and justice for victims who had previously seen little of either.”

NCAI will host a virtual Tribal Leader Town Hall on the Violence Against Women Act on March 22, 2022 to discuss this historic moment for Indian Country, review the tribal provisions in the law, and highlight the next steps for Tribal Nations.