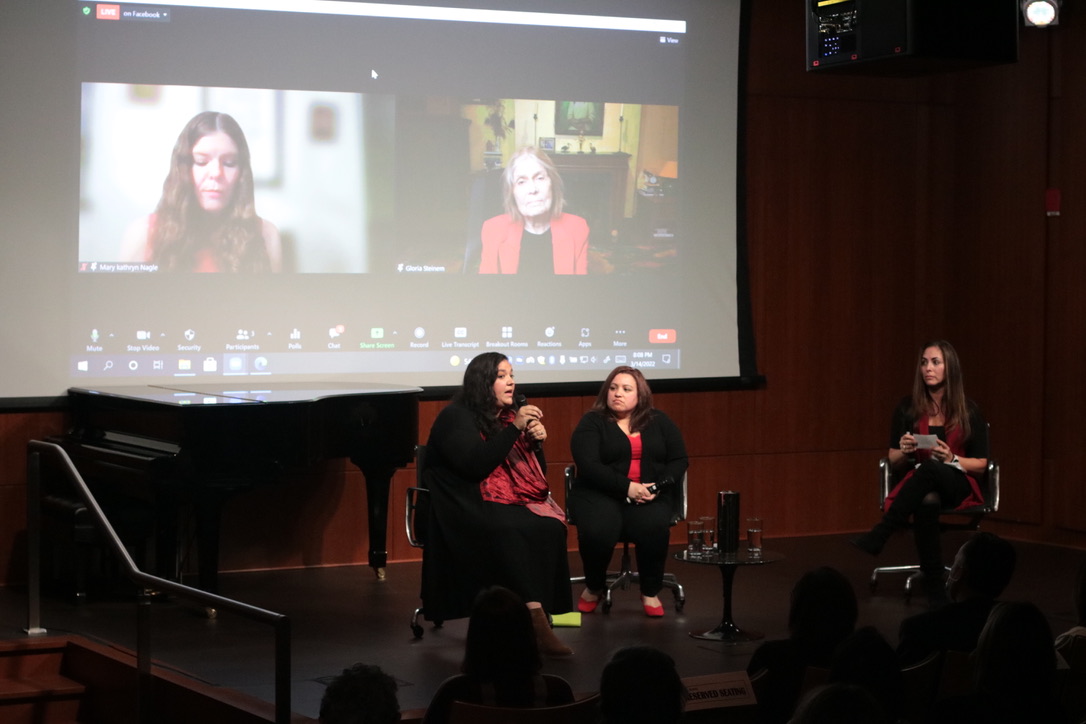 NEW YORK—Last August, a white woman, Gabby Petito, was killed by her fiance in Northwest Wyoming, sparking national attention. Petito’s remains were found in just eight days, in the same region where more than 700 Native American people have gone missing in the last decade, according to the Wyoming’s Taskforce on Missing and Murdered Indigenous Persons.

A panel of four female activists and lawyers took the stage at Brooklyn Public Library last night to lead a discussion on the Missing and Murdered Indigenous Persons crisis, each donning a article of red clothing.

Panelists said that, if the same resources were given to Native women, the MMIP crisis would not be so severe.

The Indigenous speakers made connections between colonization, the boarding school era, settler’s seizure of Native and resources, oil and gas development, and the present day reality of “santionced neglect” for Indigenous women by the U.S. government and major media outlets.

“This crisis really starts when you go back to colonialism,” Bruegl said. “A lot of times people refer to Pocahontas as probably one of the first most famous victims of the MMIW…epidemic. She is ten years old when she enters your history books. There’s this mythologized relationship with John Smith…(who) is 27. Ew. There's a period of her life where she's held captive on a ship. We don't know what happened. But she comes off that ship a different person.”

In 2022, Bruegl said, Indigenous women and communities are still facing the same violence. Native women in the U.S. face murder rates that are more than 10 times the national average, according to the U.S Department of Justice (DOJ). Additionally, the DOJ found that four in five American Indian and Alaska Native adults experience some form of violence in their lifetime, and the vast majority of those events are perpetrated by non-Natives.

But a jurisdictional gap created by a 1978 Supreme Court decision has further hamstrung Native communities. In Oliphant v. Suquamish Indian Tribe, the U.S.’ highest court declared that Tribal Nations could no longer prosecute non-Indians who commit crimes against Native victims on tribal lands.

The Violence Against Women Act (VOWA) is expected to be reauthorized again on Wednesday, this time with restored tribal criminal jurisdiction over non-Indian crimes of stranger sexual assault—”which is not somethingtribes have had their own jurisdiction over since 1978”—according to news Nagle received during the panel.

“I got an email invitation to the White House on Wednesday for the signing of the Violence Against Women Act,” she said. “There's just really no question that, when President Biden signed this into law, this will go a long way towards addressing the MMIP crisis.”

“So non-Indians can still walk on to tribal lands and commit homicide so long as it's outside of the context of an intimate partner relationship—so it can't be domestic violence—and that will still remain a crime that tribal nations can’t prosecute when perpetrated by non-Indians,” Nagle said. “I just like to give that example because I think you told people living in Texas that their own state government can't protect them i someone from Oklahoma comes into their home and murders them, they would lose their minds.”

Additionally, panelists said, it’s a lack of resources and awareness that exacerbate the crisis.

“In the US, there are 574 federally recognized tribes, (but) there are fewer than 50 tribal domestic violence shelters,” LaPorte said.  “If you think about the incredible rates of violence that we experience, and then pair that with the absolute lack of places we have to go for safety, that is a risk.”

“All you have to do is look at the reaction to Gabby Peitito’s death and compare that to any of the families that I work with, where they can't even get an FBI agent to undertake an actual investigation,” Nagle said.

The solution lies in education and legislation, panelists agreed.

Steinem said that the “great gift” of last night’s program is that it excited the curiosity and the anger of listeners.

“It tells you how incomplete our own education is,” Steinem said. “I hope that people who are sitting in the audience are mad as hell at what they don't know and what they’ve been deprived of, and what therefore becomes replicated as an injustice, because it has (been) allowed to become invisible.”

The program was presented in partnership with the Lenape Center in Manhattan, and was a collaboration between Brooklyn Public Library’s cultural programming.