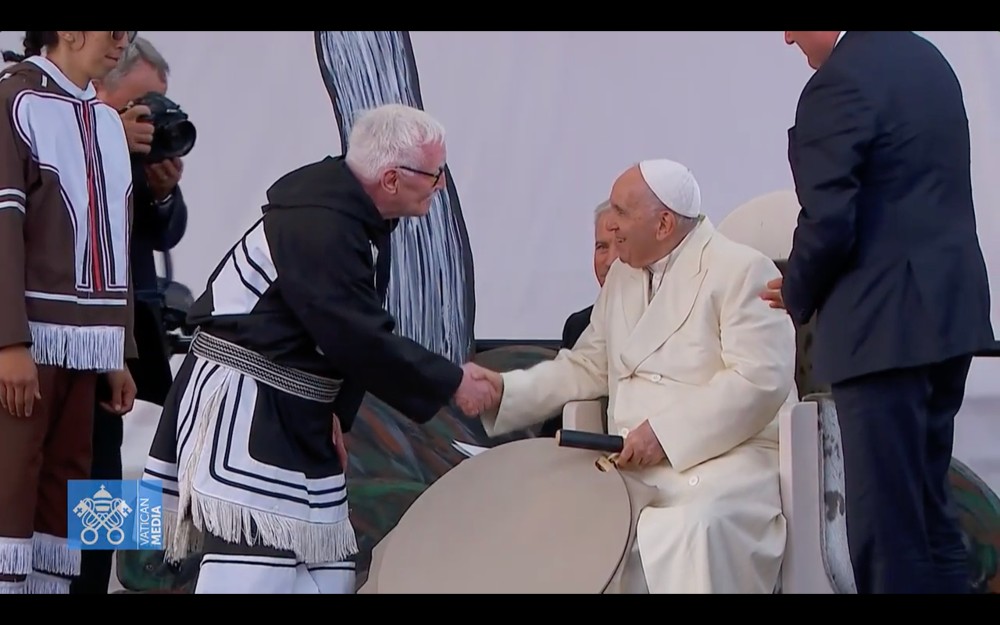 On Friday, Pope Francis said the residential school system that abused and aimed to assimilate Indigenous peoples in Canada was “genocide.” The statement came in a conversation with reporters on his return flight to Rome, according to Vatican News.

He said the word 'genocide' didn’t come to mind during his “penitential pilgrimage” in Canada.

The statement followed the conclusion of the Pope’s six-day visit to what is now Canada. In a gathering on Friday with young and elder Inuit people, Pope Francis apologized for “the evil perpetrated by not a few Catholics” who contributed to assimilationist policies in the residential school system. He said that “we are here with a desire to pursue together a journey of healing and reconciliation.”

“How evil it is to break the bonds uniting parents and children, to damage our closest relationships, to harm and scandalize the little ones,” Pope Francis said during the event, which was broadcast by Vatican News.

In his visit to Iqaluit in what is now the Canadian province of Nunavut, Pope Francis spoke privately with residential school survivors. Prior to the visit, Vatican News said that the Pope would “listen to some of their stories, pray the Lord’s prayer and impart his blessing on them.”

“A short while ago, I listened to several of you, who were students of residential schools,” Pope Francis said. “I thank you, for having had the courage to tell your stories and to share your great suffering that I could not imagine. This only renewed in me indignation and shame that I have felt for months.”

The Pope then met with young people and elders in the primary school square in Iqaluit. Inuit Tapiriit Kanat (ITK), an Inuit organization that represents 65,000 Inuit, said the Pope would share in the lighting of the qulliq, a traditional lamp, in a gymnasium “recreated with the warmth and comfort of an igloo.”

“Inuit invited Pope Francis to visit our homeland, and on July 29 we are welcoming him to our home, to the place we have inhabited since time immemorial,” ITK president Natan Obed said in the ITK’s statement. “This is a meaningful visit for Inuit, who have experienced lasting pain and suffering, and who remain welcoming and open to the possibility for true reconciliation.”

The public event included performances from Inuit singers and dancers and throat singers. Piita Irniq, a drum dancer, presented the Pope with a drum. ITK said Tuesday that the cultural performances would prioritize highlighting Inuit traditions that were nearly lost during the residential schools era.

On Monday, the Pope visited the former grounds of Ermineskin Residential School. He apologized for the "ways in which many members of the church and of religious communties cooperated, not least through their indifference" in projects that culminated in the residential school system, and voiced support for an investigation. He did not revoke the Doctrine of Discovery that permitted European explorers to take Indigenous land.

In a homily on Thursday, the Pope addressed the “sexual abuse of minors and vulnerable people” in reference to the “evil perpetrated by some of [the Church of Canada’s] sons and daughters.” The mention came after criticism that sexual abuse was not mentioned in the Pope’s initial apology on Monday.

The Pope’s full remarks at Iqaluit can be read here and watched here.

In 2015, Canada’s Truth and Reconciliation Commission said that the residential school system “was an integral part of a conscious policy of cultural genocide.” The report found that thousands of First Nations, Inuit, and Métis children suffered spiritual, emotional, physical and sexual abuse in residential schools run by Catholics. The Catholic Church was responsible for running nearly three-quarters of the 130 Canadian residential schools, Native News Online reported.