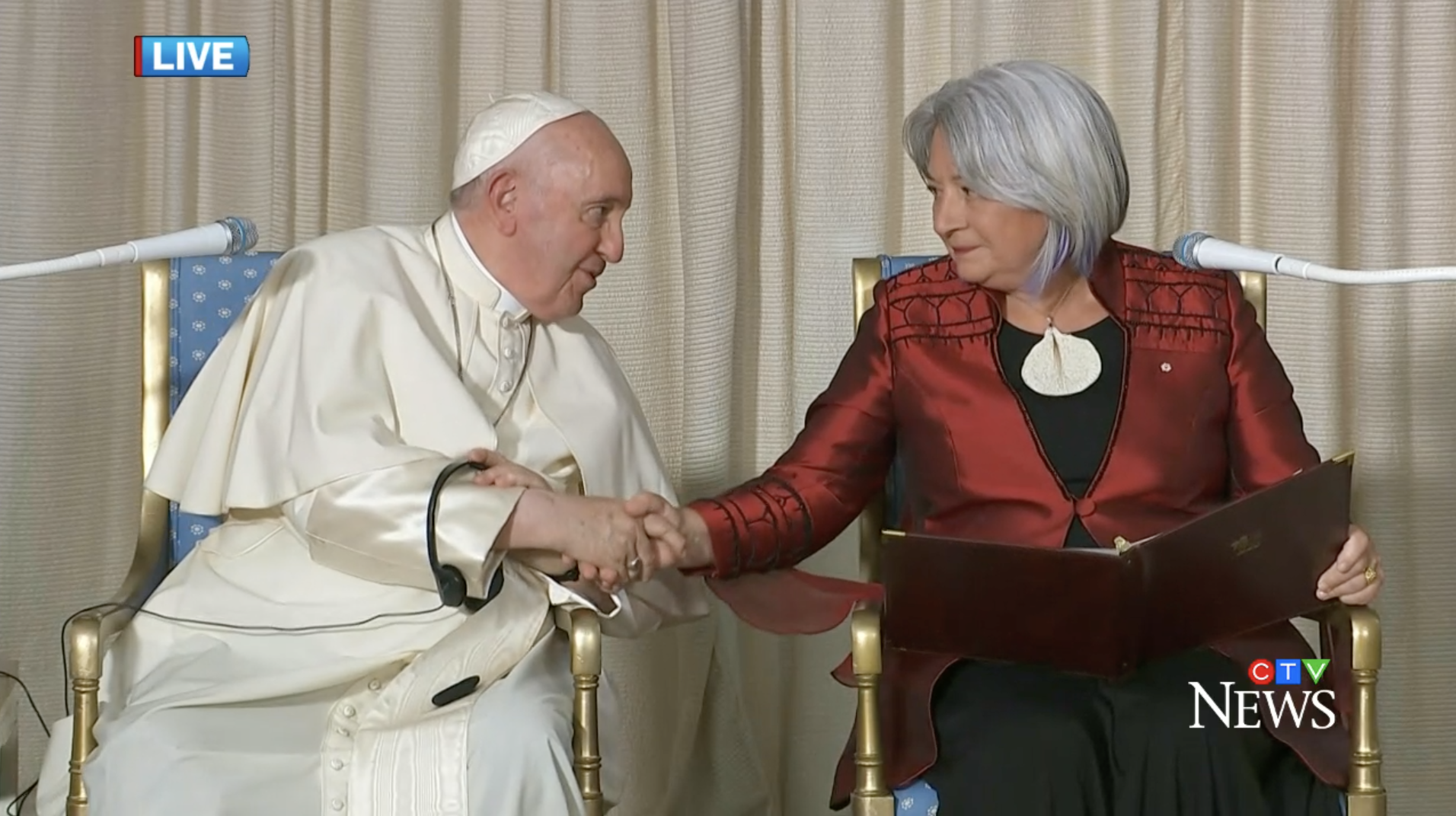 Pope Francis landed in Québec City, Québec, on Wednesday afternoon, on the second stop of his apology tour to Indidgenous Peoples across Canada for the “evil committed by so many Christians” during the residential boarding school era.

The eastern portion of his six day trip, following Edmonton and preceding Nunavut, had a larger emphasis on government than the days prior.

Around 5pm EST, the Pope arrived at the Citadelle of Québec. He first met privately with Governor General Mary Simon, an Inuk woman and the first ever Indigenous person to hold the role. Afterwards, the Pope had a ten minute private conversation with Canadian Prime Minister Justin Trudeau.

“I acknowledge and applaud what has been achieved–what Indigenous communities have achieved with this week's visit,” Governor General Mary Simon said to the crowd. “It is Indigenous peoples who worked to pave a way for an apology on Indigenous lands in Canada. We must remember that it is because of their courage and resilience that we are here today”

Pope Francis, seated at the front of the room beside Simon, delivered an apology once again to the Indingeous communities in Canada.

“I express my deep shame and sorrow and, together with the bishops of this country, I renew my request for forgiveness for the wrongs done by so many Christians to the Indigenous peoples.”

He said that the Holy See and the local Catholic communities “are concretely committed to promoting Indigenous cultures in specific and appropriate spiritual ways that include attention to their cultural traditions, customs, languages, and educational processes in the spirit of the United Nations Declaration on the Rights of Indigenous Peoples.”

Indigenous leaders and audience members were not given an opportunity to address the Pope at all, Kenneth Deer of the Mohawk Nation told Native News Online, from the ground in Québec.

Deer is part of the Haudenosaunee Confederacy of Six Nations—whose total territory stretches from northeastern New York into southeastern Ontario and southwestern Québec. The Confederacy was invited last minute to speak with the Pope. Deer and three other Haudenosaunee External Relations Committee members had planned to ask the Pope to revoke the Papal Bulls, official decrees issued by Pope Alexander the VI in 1493 that make up the Doctrine of Discovery. The Doctrine of Discovery gave European explorers authorization to seize land that was not populated by Christians “and to reduce their persons to perpetual slavery.”

“That’s what we're here for. We’re not here about the apology,” Deer told Native News Online. “We weren’t able to present to the Pope, and we’re not happy about it.”

Deer said they're going to try to find a time in the next few days to meet with the Pope before he departs for Nunvut on Friday afternoon.

“We haven’t given up,” Deer said. “And some people are sympathetic to our efforts.”