CAMBRIDGE, Mass. — The Peabody Museum of Archaeology and Ethnology at Harvard University has agreed to repatriate a pipe tomahawk once belonging to Chief Standing Bear of the Ponca Tribe of Nebraska, after 142 years away. 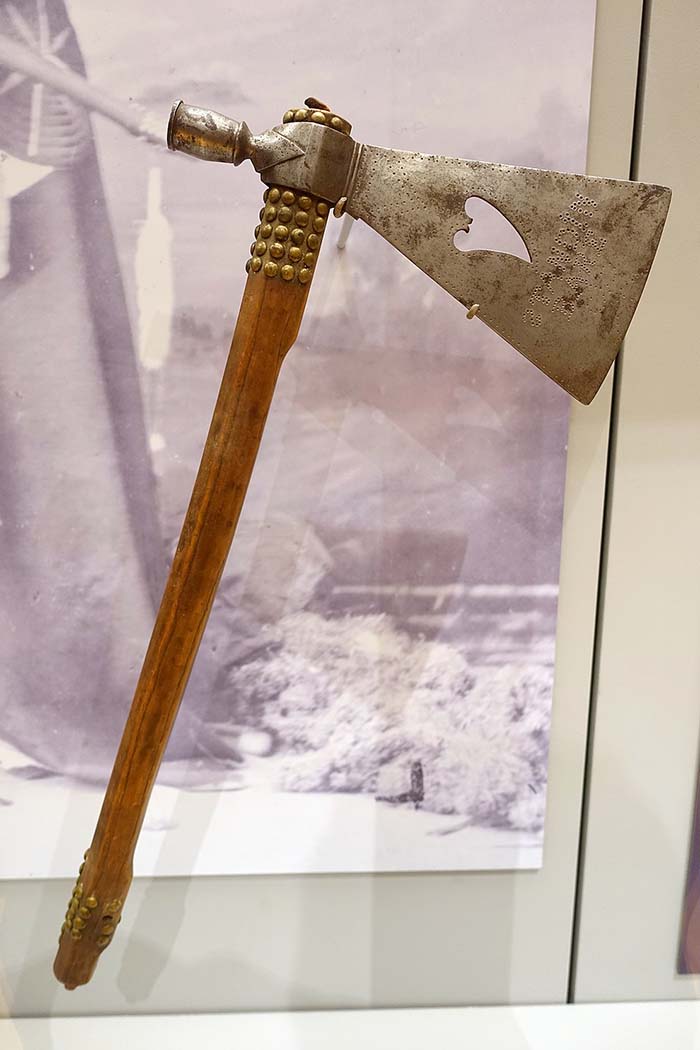 “I feel like it's an heirloom that's coming back home,” said Stacy Laravie (Ponca), Tribal Historic Preservation Officer at the Ponca Tribe of Nebraska, and also a descendant of Standing Bear. The exact timeline for return is unknown, as the tribe scrambles to build an appropriate display case to hold the relic in its museum. The museum is also located near Standing Bear’s gravesite.

A joint agreement between the Peabody Museum, the Ponca Tribe of Nebraska, and the Ponca Tribe of Oklahoma—a smaller southern tribe split across state borders for generations due to federal government displacement—is being drawn up, said museum director Jane Pickering.

Chairman Oliver Little Cook of the southern tribe told Native News Online that the tomahawk will go to the Ponca Tribe of Nebraska due to his tribe’s lack of museum infrastructure to appropriately house the tomahawk.

“We're glad to get it back in the possession of the Northern Poncas,” Chairman Little Cook said. “We're one tribe, anyhow, so it’s back in our possession.”

In 1877, the Ponca people were forcibly removed from their homelands in northeast Nebraska and made to walk to their new Indian Territory in Oklahoma during the Ponca Trail of Tears. When Chief Standing Bear returned home to Nebraska to bury his son, he was arrested for breaking a law requiring Native Americans to stay on their reservations, and ultimately made history in the landmark case of 1879, where a Nebraska federal judge declared Native Americans a “person” under U.S. law for the first time in history. In a show of gratitude, Standing Bear gifted his lawyer, a white man named John L. Webster, his pipe tomahawk, which later ended up in the Peabody Museum after Webster's death.

“Back in those days, it was a rare thing for so many whites to come together and help a Native group,” Laravie said. “I think Standing Bear knew that, and I feel that he felt that… it was a big act on everyone that helped him, and he’d seen them as family. When we give someone something, whether it's a giveaway, or a gift, we don't do it just for frivolously, there's always a reason behind it.

She said that when her great great great grandfather gave the tomahawk to his white attorney John L. Webster, he didn’t intend for it to be passed along.

“For this to get in the hands of someone outside of that family, to me, I feel those ties were a little bit severed,” she said.

The effort to repatriate the tomahawk was spurred in April by another of Standing Bear’s descendants, Brett Chapman (Pawnee), who said he’d known about the heirloom's location for years. Chapman, an attorney inspired by Standing Bear to practice civil rights and Native American law in Tulsa, Okla., sent a letter to museum director Pickering dated April 29.

“Based on the available information. I do not challenge the legal right of Harvard to possess this item; however, I do challenge the moral right on this basis,” Chapman wrote. “Standing Bear’s tomahawk in your possession is an item of patrimony.”

Chapman said that, because the tomahawk was a “personal item” of Standing Bear, it does not fall under the purview of the law, and the attorney instead hinged his request on the principle of morality.

“The museum is interested in… having the pipe tomahawk be with the Ponca people,” Pickering told Native News Online. She said that the repatriation, while not subject to NAGPRA, doesn’t mean the museum is going to ignore Chapman’s request. Pickering said that, following the receipt of Chapman's letter, she immediately got in touch with tribal chief Larry Wright Junior in Oklahoma and Chairman Little Cook in Nebraska.

“This is obviously something that is deeply meaningful for all Americans, but especially without question for the Ponca Tribal Nations,” she said. “We… recognize that and want to do what’s the right thing to do in that situation.”

The Peabody museum came under fire last winter when the Association on American Indian Affairs (AAIA)—the oldest nonprofit serving Indian Country—sent Harvard a letter condemning the university’s response to discovering possible slave remains in their collection, and its failed commitment to NAGPRA.

In Feburary 2021, after the Peabody museum discovered the remains of 15 people of African descent who were likely alive when slavery was legal in the United States, Harvard president Lawrence S. Bacow announced the formation of a steering committee on all human remains in the university’s museum collections.

Shannon O’Loughlin (Choctaw), the Chief Executive and attorney for AAIA, wrote to the university that the creation of another steering committee would only further delay the university’s legal responsibility to repatriate to Indigenous nations under NAGPRA.

“Instead, we urge you to simply comply with federal law that has been in place more than 30 years, and to require the free, prior and informed consent of Native Nations affected by research and collection practices of your institutions,” she wrote.

After 30 years of NAGPRA, AAIA asserted that Harvard has repatriated 18.4 percent of the ancestors in its collection—“that means there are still 6,586 of our Ancestors and 13,610 of their burial belongings in boxes on shelves,” O’Loughlin added.

Pickering countered that the museum has repatriated 34 percent of its Indigenous collection.

The Association also noted that Harvard has “significantly more deceased Native people in boxes on [its] campus than the number of live Native students that [it] allow to attend [its] institution,” noting the university’s 69 Native American students out of more than 31,000 total students.

Last summer, the museum established a NAGPRA advisory committee to help guide its federal obligation, including bolstering its outreach to all 574 federally recognized tribal nations. Pickering noted an online database cataloging the museum’s extensive collections. “I don't think museums are hiding things,” she said. “It's just that, you wouldn't necessarily know that that particular pipe tomahawk had come to Harvard as opposed to any other museum. So I think that is really challenging for folks.”

One of the questions facing the museum, Pickering said, is how it can help increase awareness among tribal nations—and communities nationwide—of collections it holds.

But one of the problems with repatriation is not just that many tribal nations are unaware of where their stolen cultural items have ended up, they also have no knowledge of missing items in the first place. The Pebody’s online database, while extensive, is not much help if tribal nations don’t know where to look, or what’s missing.

The tomahawk repatriation comes at a time of real reckoning across the United States, and even the world.

Earlier this month, the discovery of nearly 1,000 children’s remains from Indigenous boarding schools in both the U.S. and Canada has served to remind policy makers, heads of state, and even Pope Francis of the painful history of injustice brought upon Native Americans, Alaska Natives, First Nations, Inuit, and Métis youth.

“I think what we're seeing going on right now in this country is a real reckoning,” Chapman said. “In the context of a cultural awakening here, this is a natural fit for it now.”

Late last month, the bodies of 215 Indigenous children were unearthed in an unmarked grave at the former site of the Kamloops Indian Residential School in British Columbia. The discovery sounded off a nationwide call to action among Indigenous communities for the church and Canadian federal government to work towards finding where children are buried at other residential schools across the country.

On June 24, the Cowessess First Nation announced a preliminary finding of 751 unmarked graves at a cemetery near the former Marieval Indian Residential School in Saskatchewan.

Last week, the Carlisle Indian Industrial School began the exhumation of 10 Native American and Alaska Native children who died more than 100 years ago while attending the school in Pennsylvania.

Stacy Laravie, the Ponca Tribe of Nebraska’s Tribal Historic Preservation Officer, said the return of her great great great grandfather’s tomahawk is a small step in a much bigger process of seeking justice for Indigenous people.

“There was so much loss, including… so many ancestors, unjustly,” she said. “But we're still here. We're resilient. They did not wipe us out.”