‘Ensure Our Children Are Returned to Their People’ 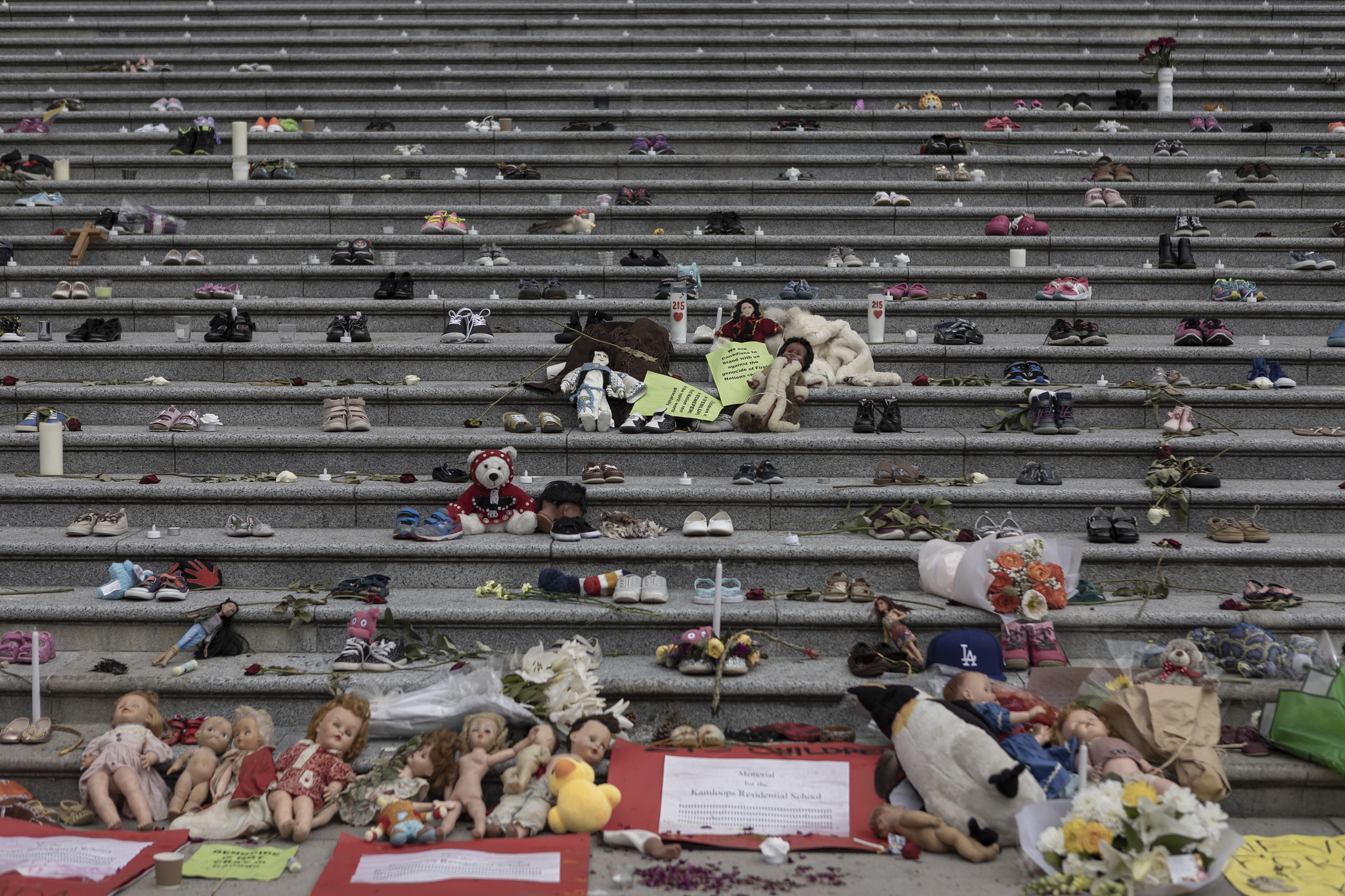 KAMLOOPS, B.C. — On the first day of National Indigenous History Month, First Nation leaders across Canada demanded their government help identify and repatriate the remains of Indigenous children across the country after a mass grave was discovered last week on the former site of a residential school in British Columbia.

On May 27, the Tk’emlúps te Secwépemc First Nation located in B.C.'s southern interior announced preliminary findings of an unmarked gravesite on the former property of the Kamloops Indian Residential School, holding the remains of at least 215 children—some as young as three years old.

“We had a knowing in our community that we were able to verify,” Casimir said. The tribe hired a specialist in ground-penetrating radar to find the gravesite during a site survey on its property.  “To our knowledge, these missing children are undocumented deaths.”

The Kamloops Industrial School, later known as the Kamloops Indian Residential School, was one of 134 officially designated Indian Residential Schools in Canada that operated from 1893 to 1996 in an effort to assimilate First Nations, Inuit, and Métis youth. The schools were run by Catholic missionaries who forbade students from speaking their Native languages, eating their Native foods, or practicing their cultural traditions in what the Candian government now recognizes as “cultural genocide.”

In response to the news, Prime Minister Justin Trudeau tweeted that Canada “cannot hide” from its painful history. “Residential schools were a reality — a tragedy that existed in our country — and we have to own up to it,” he wrote. “We all have a role to play in dismantling systemic inequalities and discrimination — it starts with acknowledging the truth about these past wrongs. It also starts with learning about and honouring the heritage, cultures, and traditions of First Nations, Inuit, and Métis peoples.”

Trudeau also announced that the 2021 budget includes $18 billion over the next five years to support Indigenous communities.

But some say that’s not enough.

Assembly of First Nations (AFN) National Chief Perry Bellegarde said that, in the wake of the discovery of the children’s burial site, there has been an outpouring of support and grieving for the lives lost. “Flags are half mast, children’s shoes line the steps at Parliament and at monuments across the country and an orange wave is washing over social media,” he said in a statement provided to Native News Online.

Indigenous leaders such as Bellegarde say the next step is to identify the undocumented remains, and repatriate them back to their families.

“I demand that all governments commit to supporting First Nations seeking thorough investigations into former residential school sites and to take any, and all action available to hold perpetrators accountable for their actions,” Bellegarde said. “I encourage every single person in Canada to stand with First Nations as we press forward for action to ensure our children are returned to their people to finally receive the respect and dignity not provided to them in life.”

In Alberta, provincial Minister of Indigenous Relations Rick Wilson this week committed the province’s government to funding research into the undocumented deaths and burials of Indigenous children who never returned home.

Following suit on the opposite side of the country, Six Nations of the Grand River in Ontario—Canada’s largest First Nations territory—sent an open letter to Trudeau Tuesday asking the government to provide it with ground-penetrating radar technology to search its own properties for unmarked graves.

The Mohawk Institute was one of the first residential schools in Canada and had the longest-running history, Chief Mark Hill wrote in the letter. “This meant it was unregulated and unaccountable from the start,” he said. “With the discovery of the 215 children in Kamloops, there are no excuses for not taking aggressive action to find all the lost ones at any such locations across Canada, including the Mohawk Institute.”

‘There are many others’

While Indigneous leaders across Canada expressed grief and anger at the recent discovery in Kamloops, many say they aren’t surprised, and that many unmarked gravesites must also be uncovered and addressed.

“The important thing to know here is that these children are just some of the children who died in these schools,” said Cindy Blackstock, executive director of the First Nations Child and Family Caring Society of Canada, a nonprofit that advocates for Indigenous families, in an interview with Democracy Now! earlier this week. “There are many others in unmarked graves across the country.”

The 1906 Annual Report of the Department of Indian Affairs, conducted by chief medical officer Dr. Peter Bryce, shows that Indigenous kids suffered from a mortality rate of more than double that of the whole population.

That was due to high rates of infectious disease, such as tuberculosis, coupled with poor living conditions and rampant physical and sexual abuse suffered by Indigenous children within the schools.

“What we know is that First Nations, Métis and Inuit children were dying at prolific rates often related to the federal government's underfunding of the schools… and bad health practices…” Blackstock said. “And the federal government knew about this in 1907, had the remedies to address it, and chose not to do it.”

In 2007, the Canadian government established the Truth and Reconciliation Commission (TRC) to hear testimonies from more than 6,500 witnesses and survivors who were directly or indirectly affected by the legacy of the residential school system.

As a result, the commission produced 94 calls to actions for reconciliation between Canadians and Indigenous peoples in December 2015. Among the recommendations were calls for federal, church and Indigenous community leaders to work toward finding where children are buried at the additional residential schools across the country.

An anthropologist commissioned by the TRC to examine where deceased children who went to residential schools are buried, Dr. Scott Hamilton, said there are “enormous gaps in written records.”

To create an accurate record, the anthropologist relied on satellite imagery to detect telltale signals of burial sites, such as depressions or mounds marking gravesites. Pairing his newfound spatial information with the few written records, Hamilton was able to locate many burial grounds, though he said there is still no clear idea how many children lie within them.

According to Hamilton, there’s 4,000 Indigenous children with existing death certificates from the residential school era, but that doesn’t include the “considerable” number of children whose families say never returned home.

“This is one school in well over 100,” Hamilton told Native News Online. “That gives you an indication of the number of times this is going to become an issue in Canada. Many of these places operated for 50 or 60 or 70 years, and there are a lot of deaths and… cumulatively there will be a lot of kids who will be interred in these school cemeteries, or in an additional cemetery nearby, or in the church yard cemetery.”

Moving forward, the Tk’emlúps te Secwépemc First Nation said it will complete its preliminary findings—including engaging with the coroner, reaching out to the home communities who had children attend the Kamloops Indian Residential School, and seeking additional records—by mid-June.

According to Hamilton, prioritizing broad consultation on the individual wishes of the families for exhuming their relatives should be prioritized.

“My sense is that the communities of the survivors don't speak with one voice about what needs to be done next,” Hamilton said. “Because each of these schools might have kids from very, very widely dispersed areas that were schooled there, it will require a consultation that is quite broad and it might involve multiple First Nations, all of whom have different perspectives about what should be done.”

For support or resources, a National Indian Residential School Crisis Line is available 24/7 for those directly or indirectly impacted by the residential school era, and can be reached at 1-866-925-4419.