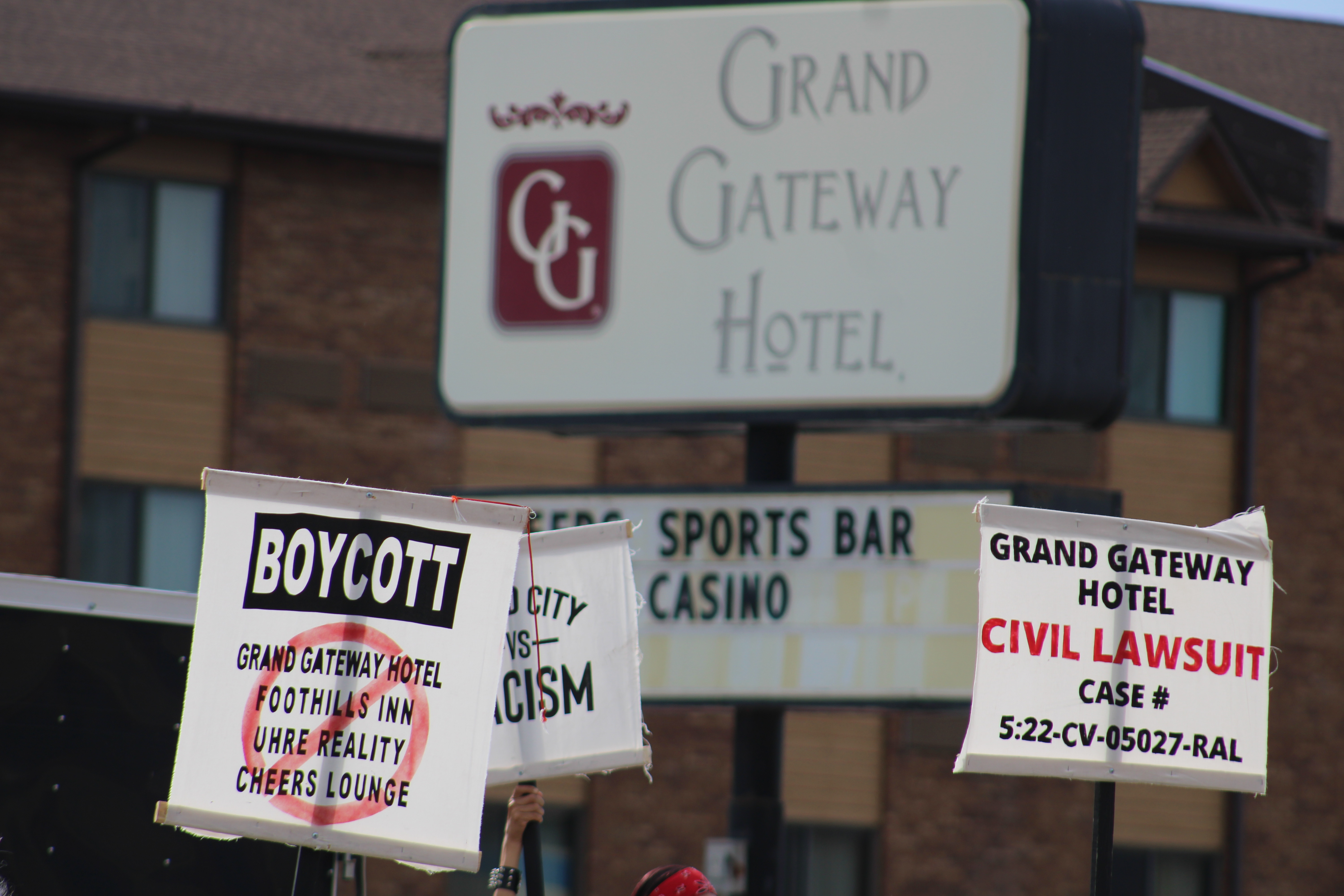 RAPID CITY, S.D. — Yesterday, the U.S. Department of Justice filed a lawsuit against the Grand Gateway Hotel in Rapid City, alleging the company violated the civil rights of Native Americans.

The DOJ alleges that the Grand Gateway Hotel and Cheers Sports Lounge and Casino discriminated against Native American customers. Title II of the Civil Rights Act of 1964 prohibits discrimination on the basis of race, color, religion or national origin in places of public accommodation, such as hotels and other places of entertainment.

“Policies prohibiting Native Americans from accessing public establishments are both racially discriminatory and unlawful,” Assistant Attorney General Kristen Clarke of the Justice Department’s Civil Rights Division said in a  statement yesterday. “The Justice Department will continue to vigorously protect the rights of all people to go about their daily lives free from discrimination at hotels, restaurants and other public accommodations around the country.”

On March 20, 2022, Grand Gateway Hotel owner Connie Uhre commented on social media, saying the hotel was not allowing Native Americans on the property due to a shooting that left 19-year-old Myron Pourier (Oglala Lakota) dead.

After Connie Uher’s comments on social media, Tribes and leaders began organizing protests to boycott the hotel. Several employees of NDN Collective — a Rapid City-based Indigenous advocacy nonprofit — tried to rent rooms at the hotel and were denied. Each denial cited a different reason: either the hotel was not renting to locals or not accepting new guests.

A lawsuit was filed several days after Uhre’s comments on behalf of NDN Collective after its two attempts to rent rooms were denied.

The DOJ complaint filed against Grand Gateway Hotel and Cheers Sports Lounge and Casino yesterday stated: “Defendants Connie Uhre and Nicholas Uhre are responsible for devising, implementing, and instructing employees and agents to carry out the racially discriminatory policies and practices described above at the establishments known as the Grand Gateway.”

After the initial protests demanding that the hotel be shut down, the hotel closed operations for nearly two months until May 16, 2022. NDN Collective continued to organize protests outside the Grand Gateway. Soon after it reopened, Connie Uhre was arrested for three counts of simple assault for spraying a cleaning agent at protestors, including NDN Collective’s Racial Equity Director Sunny Red Bear.

“After several months of mobilizing and organizing against racism here in our homelands of MniLuzahan (AKA Rapid City), we are seeing the outcome of a federal investigation we’ve been pushing for,” Sunny Red Bear said in a statement yesterday. “It’s important to remember this is not just about the Grand Gateway Hotel — it’s the tip of the iceberg when it comes to discrimination and racism here. We are fighting for a world where Indigenous people are treated with dignity — from our houseless relatives to our children in schools, to Indigenous patrons of businesses.”

“Our hope is that the DOJ and courts will shut down the Grand Gateway Hotel and Cheers for the owners’ violation of the civil and inherent rights of Native peoples,” said NDN Collective President and CEO Nick Tilsen. “While it’s heartening to see the DOJ take action, the scope of their lawsuit pertains to one specific instance. Indigenous people know that racism is everywhere – police departments, city councils, jails, schools, and businesses.”