WASHINGTON — Much attention was paid Thursday on the Biden administration’s first 100 days in office. When President Joe Biden took the oath of office on Jan. 20, 2021, he inherited several crises—the Covid-19 crisis, an economic crisis, a racial crisis, and a climate crisis.

There is no doubt the new Biden administration has been successful getting the Covid-19 vaccine shots to 220,000 American Indians and Alaska Natives. When Biden took over, there was no logistical plan in place to get the shots into the arms of Americans. When Biden was sworn in, less than one percent of seniors over 65 were fully vaccinated against Covid-19. Now, 100 days later, nearly 70 percent of seniors are fully vaccinated. 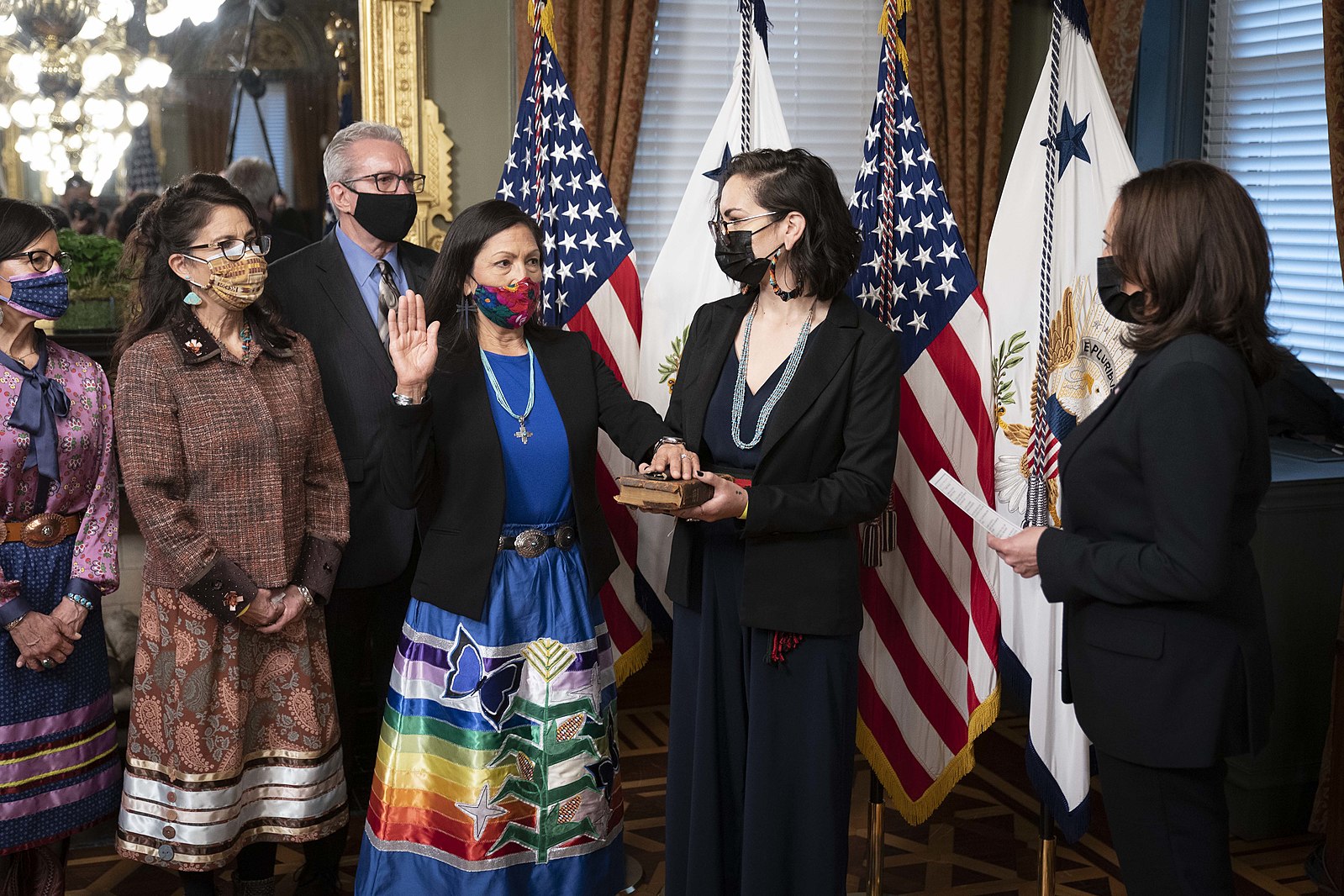 For Indian Country, the selection of Interior Secretary Deb Haaland (Laguna Pueblo) to be the first Native American ever to serve as a Cabinet secretary has been significant in the president’s proven commitment to Indian Country.

One resounding success of Biden’s first 100 days was the passing into law in March the $1.9 trillion American Rescue Plan, with more than $31 billion designated toward Indian Country – the largest amount of federal funds ever earmarked for tribes and tribal organizations.

The first meeting of the White House Council on Native American Affairs met last Friday. The Council will coordinate with tribal nations as it advances work on key issues such as climate change, tribal homelands and treaties; economic development, energy and infrastructure; health; education; public safety and justice; and international Indigenous issues.

Ten cabinet secretaries and other top government officials participated in discussions focused on strengthening the nation-to-nation relationship, improving tribal consultation, and formalizing the working committees of the Council.

The Council was first created under President Obama, but went dormant during the Trump administration. Officials said the interagency Council, which includes leaders from across the federal government, has not met regularly since 2016. It began in 2013 in response to a request from tribal leaders.

Even as the Senate continues to confirm the President’s highly qualified nominees, the White House Office of Presidential Personnel has hired nearly 1,500 presidential appointees to serve in key agency positions that do not require Senate confirmation – double the number of appointees hired by any prior administration by the 100-day mark.

Of the approximately 1,500 agency appointees hired by President Biden so far:

At the U.S. Department of the Interior, one in five (20 percent) of all appointees are American Indian or Alaska Natives.

For Sault Ste. Marie Tribe Chairperson Aaron Payment, the Biden administration has come out the gates fast in showing Biden is fulfilling the promises he made during his presidential campaign.

“This is more in 100 days than any other administration has accomplished in their entire term of office,” said Payment, who also serves as the first vice president of the National Congress of American Indians (NCAI).

The president’s fulfilled promises show the respect he has for American Indians and Alaska Natives, says Kevin Allis, president of Thunderbird Strategic, based in Washington, D.C.

“The signal thus far from the Biden administration, is one of respect for Indian Country, and that we are no longer going to be a second thought. From the appointment of Deb Haaland as Interior secretary to an honest revival of the White House Council on Native American Affairs, tribal nations across the country can feel positive about how Indian Country issues will be addressed during this administration,” Allis said.

Interior Secretary Haaland, who during her Senate confirmation hearing said she would fulfill the Biden agenda as head of the Interior Department, has already put her fingerprints on correcting damage done by the Trump administration since she was sworn in on March 17.

On April 1, Haaland created the Missing & Murdered Unit within the Interior Department, established to investigate and solve cases of missing and murdered Indigenous women. Created within the Bureau of Indian Affairs Office of Justice Services (BIA-OJS), the MMU will help put the full weight of the federal government into investigating these cases, as well as distribute marshal law enforcement resources across federal agencies and throughout Indian Country.

During her first official trip as Interior secretary, Haaland visited the Bears Ears National Monument and met with tribal leaders and community members to hear their input in the possible full restoration of the national monuments that were slashed by Trump. She will make recommendations to the president in the coming weeks.

After assessing the Interior Department’s dealings with Indian Country during the past four years, Haaland sought to correct the damages through Secretary Orders.

On April 16, Haaland established a Climate Task Force to coordinate work across the Interior Department, including accelerating renewable energy development and identifying actions to foster investments in energy communities through Secretary’s Order 3399. The order also provides guidance on how science should be used in the decision-making process and improves transparency and public engagement.

One key component of SO 3399 is the directive for the Interior Department to engage with tribes to seek their input through tribal consultation. The Order says, “Tribal consultation is a means to rectify this by recognizing the government-to-government relationship and considering Tribal interests in decision making.”

Through Secretary’s Order 3400, Haaland on Tuesday removed restrictions set in place by the Trump administration last year to allow for the restoration of tribal homelands and reinstated policies that promote the federal government’s obligation to tribal nations.

The Secretary’s Order withdrew two Dept. of the Interior Solicitor’s Opinions issued last year without tribal consultation, which replaced a two-part process and interpretation of the meaning of “under federal jurisdiction” under the Indian Reorganization Act following the decision in Carcieri v. Salazar with a new, arduous four-part process.