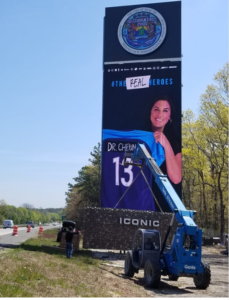 SHINNECOCK NATION — The Shinnecock Indian Nation got a victory in New York state Supreme Court in its fight to keep its electronic billboard, built on a right-of-way along Sunrise Highway on Long Island.

The sign is the first of two that the tribe has planned in the area. The signs are a means of economic development for the tribe, generating advertising revenue for the Shinnecock Nation, which gained federal recognition in 2010.  Unlike many other tribes in the northeastern U.S., the Shinnecock Nation does not have a tribal casino to generate revenue to fund the tribal government and services.

At the time the billboard was erected, the Shinnecock Indian Nation faced strong resistance from the adjacent town of Southampton, which served the tribal nation with a cease-and-desist order. The town said the Nation began building the billboard without the proper local permits. As a federally recognized tribe, the Shinnecock Nation maintained because it is a sovereign nation, it did not need to even apply for local permits.

The State of New York Dept. of Transportation soon became involved and sought an injunction to have the existing sign removed and prevent the construction of the second billboard sign.

On May 24, 2019, the New York State Attorney General’s Office brought a lawsuit against the officers of the Shinnecock Indian Nation, soon after the first sign was operational, but before the second sign could be completed.

Gumbs said the tribe was excited with the rationale used by the judge in the ruling. In particular, Gumbs referred to Judge Berland’s explanation that “It is undisputed that the Shinnecock Nation’s ancestral domain encompassed essentially the entirety of what is now the Town of Southampton, and it has been established that the presence of the Nation in that domain has been continuous.”

Berland further determined that the signs “pose no unacceptable safety risk.” He stressed the greater importance of the Nation’s opportunity to produce revenue through economic activities on its own land, unencumbered by State interference, deciding that the balance of interests in this case favored the Tribe.

“The Shinnecock Indian Nation has continued to operate the Monument Billboard while the lawsuit was pending,” the Council of Trustees said. “Most recently, and at the request of the Town of Southampton, the Billboard has displayed public service announcements relating to the Covid-19 pandemic, providing safety information, and demonstrating its presence as a benefit, rather than hazard, to the surrounding community.”

With the lawsuit, Gumbs says some national advertisers have been reluctant to place advertisements on the billboard during the litigation. With Monday’s ruling, he is hopeful the concern will go away and the tribe can bring in more revenue.