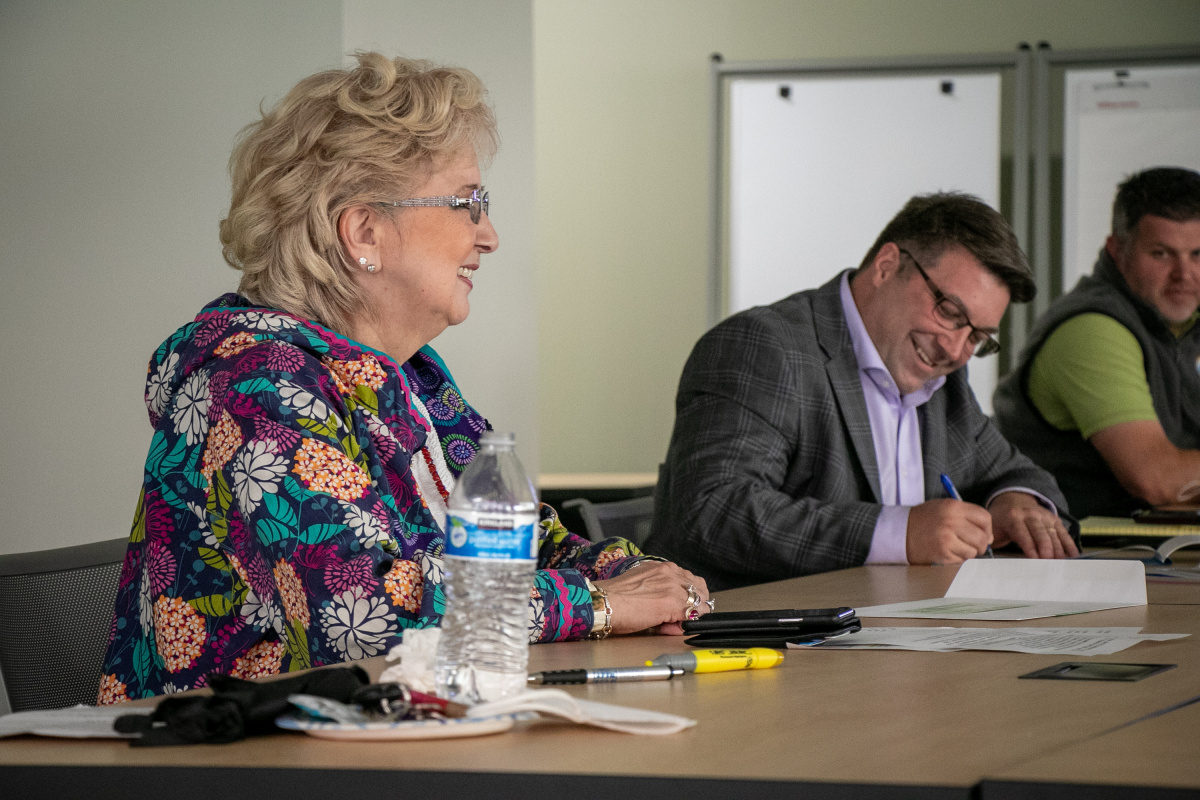 NOME, Alaska — In what was hailed as a “historic milestone,” the more than 8,000 shareholders of the Bering Straits Native Corporation once again have control over a strategic Arctic isthmus known as Point Spencer.

The Bureau of Land Management signed a patent transferring about 2,200 acres of Alaska Native Claims Settlement Act (ANCSA) lands to BSNC on July 30 in Anchorage, the culmination of a process that’s taken more than a decade and an act of the U.S. Congress to come to fruition.

While the land conveyance gives the Nome, Alaska-based BSNC control over a spit of land that shareholders’ ancestors used for centuries as a gathering place and trading site with whaling vessels and other tribes, it also presents a key economic opportunity for the region’s Indigenous people.

Point Spencer is a narrow strip of land that helps protect the adjacent Port Clarence, one of the only natural deepwater ports in the American Arctic, which is becoming an increasingly important focal point for marine traffic given the shifting climate patterns that have affected the region over the last several decades. As well, that increased marine traffic brings about key defense and national security concerns that could be addressed from an Arctic location such as Port Clarence.

“Clearly, its strategic location and natural attributes of deep water and protected moorage make Point Clarence a valuable, if not critical location for a national security presence,” said Miriam Aarons, senior director of media and marketing for Bering Straits Native Corporation, which continues to evaluate future uses for the site.

“At the same time, Port Clarence could also serve as a staging area for natural resource development in the region, a base for spill and disaster response, and as a port of refuge for shipping and cruise line interests,” Aarons told Native News Online via email. “It is going to require a combination of these uses to fully develop Port Clarence as an economic driver in the region.”

However BSNC ultimately decides to approach development of Port Clarence, any future use will put “safety and protection of the local environment before profit,” she said.

Bering Straits Native Corporation is owned by more than 8,000 shareholders who are descendants of the Inupiat and Yu'pik peoples. Its land base includes most of the Seward Peninsula in northwest Alaska that forms the Bering Strait, the closest point between the continents of North America and Asia.

The original board of directors for BSNC first selected the land around Point Spencer in 1977 as a partial satisfaction of the corporation’s ANSCA entitlement. However, the site was home to a U.S. Coast Guard LORAN navigation station and base that was built in 1961, putting it off limits. Previously during World War II, the U.S. Army Air Force in 1945 also constructed an airfield at the site. 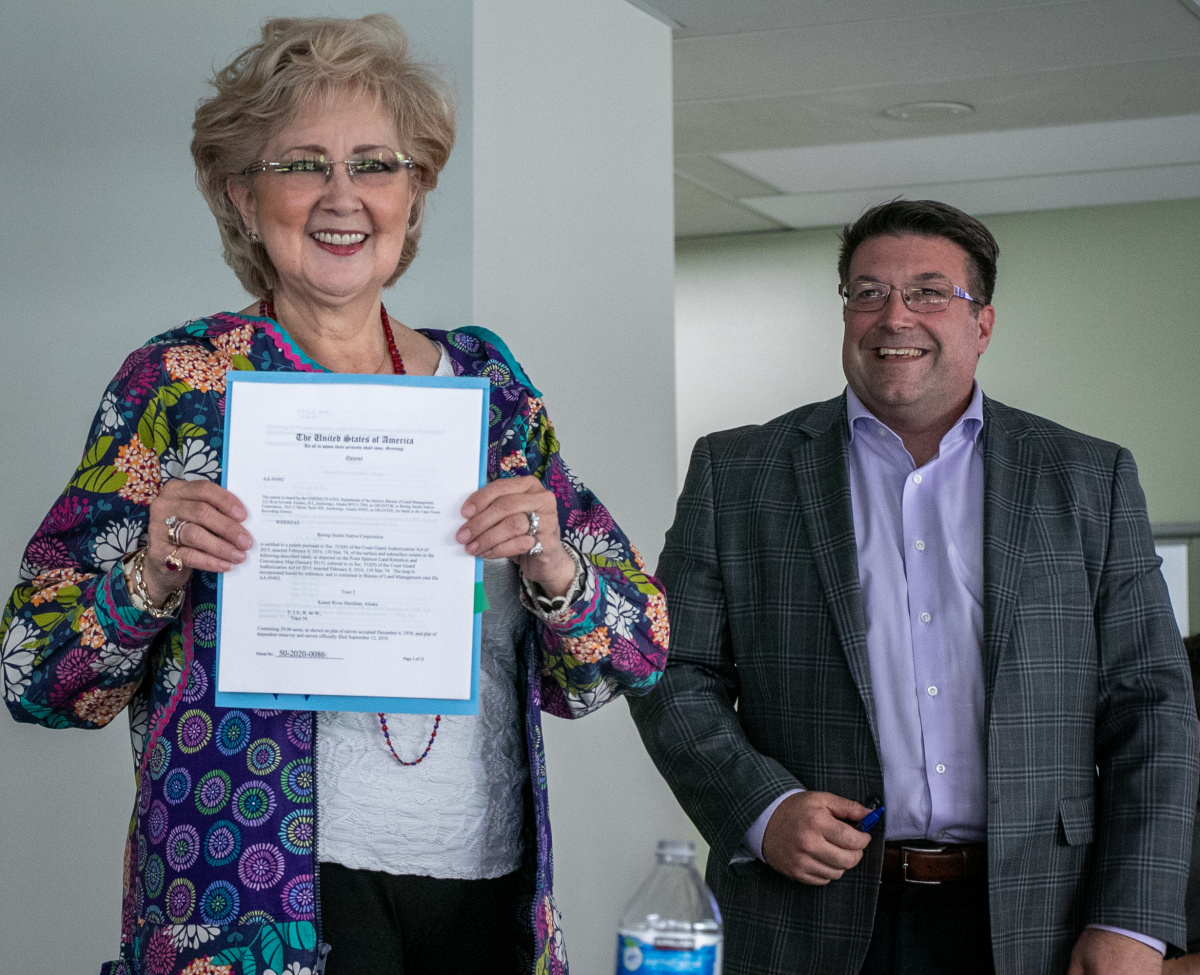 BSNC renewed its calls for conveyance after the Coast Guard decommissioned its Port Clarence station in 2009. Facilitated by BLM, the negotiations between BSNC, the Coast Guard and the state of Alaska over the lands started in 2013, kicking off what Aarons described as a “very complex land transfer” given the agencies’ requirements and environmental review process.

“There were many factors involved in getting to this point and it took a lot of negotiation, cooperation, coordination and commitment by the parties to get this done,” BLM Alaska State Director Chad Padgett said in a statement.

The conveyance also required Congressional action given that the land needed to be vacant and unappropriated under BSNC’s original application. Congress included the conveyance in the U.S. Coast Guard Authorization Act of 2016, which allowed the Coast Guard to retain portions of the site.

According to the legislation, “it is in the national interest to develop infrastructure at Point Spencer that would aid the Coast Guard in performing its statutory duties and functions in the Arctic on a more permanent basis and to allow for public and private sector development of facilities and other infrastructure to support purposes that are of benefit to the United States.”

“As our country prepares to defend our shores in the Arctic, we hope that this port will once again stand as a beacon of safety and security in service to our great nation,” Schubert said in a statement.

BSNC could look to take advantage of future federal defense contracting opportunities at Point Spencer, and hopes to provide services to federal or private industry that may establish a presence at the strategic location, according to Aarons. She cited the Graphite One and Lost River mining operations as additional potential users of the port for laydown yards, stockpiling or cross-shipping “if and when they go into production.”

Additionally, the conveyance also included an 8,000-foot airstrip, which could be used to fly in new crews for shipping vessels as well as personnel and material for disaster relief in and around the Bering Strait.

“The protected, 13-mile wide turning basin of Port Clarence makes this the only place in the American Arctic where large vessels can now seek refuge,” Aarons said, noting BSNC continues to monitor how Port Clarence might fit in as an Arctic port and trade facility.

“The single most important, and yet unanswered, question is what waters will the growing shipping traffic pass through? Will the vessels transit America, Russian, or International waters?” she said. “One project we are tracking is the possible shipment of [liquid natural gas] through the Bering Strait destined for the Asian or American market. The land on Point Spencer could be used [for] storage and transfer purposes, while the waters of Port Clarence could serve as protected moorage for lightering between vessels.”

A subsidiary of BSNC brought moorings to Port Clarence in 2016 in “a step toward improving marine safety in the Bering Strait,” according to a statement at the time.

With its natural deepwater port and shelter provided by Point Spencer, Port Clarence could pose a key alternative to the U.S. Army Corps of Engineers’ investment in developing a full-service Arctic port about 65 miles away in Nome, which would require ongoing dredging, according to a report in Arctic Today.

Aarons said BSNC will need to leverage a public-private partnership approach to developing any sort of “multi-purpose port” in the future.

While acknowledging that the federal and state governments “worked in unison” with BSNC in the last two years to conclude the land transfer, the parties early on had a somewhat contentious relationship.

In 2014 statements before the House Subcommittee on Indian and Alaska Native Affairs, Schubert said the Coast Guard seemed to have second thoughts about abandoning the site after BSNC reasserted its interest in the location. Moreover, two years after BSNC filed its claim under ANCSA for the site, the state also filed a claim for some land at Point Spencer under the Statehood Act. At another point, the Coast Guard went forward without BSNC, despite its “good-faith” discussion, to see if the state would be interested in seeking possession of the entire Point Spencer area, Schubert told the subcommittee.

Schubert also detailed the vandalization, theft and looting of cultural and historically significant items “that took place on the government's watch.”

All along, BSNC has maintained that the land would help maintain the subsistence lifestyle for the area’s Indigenous people and serve as an “economic engine” to drive its growth in the future.

“BSNC recognizes the importance of honoring our culture and history while nurturing economic development,” Aarons said. “Our people have used this area for centuries. We have a forever view at BSNC.”